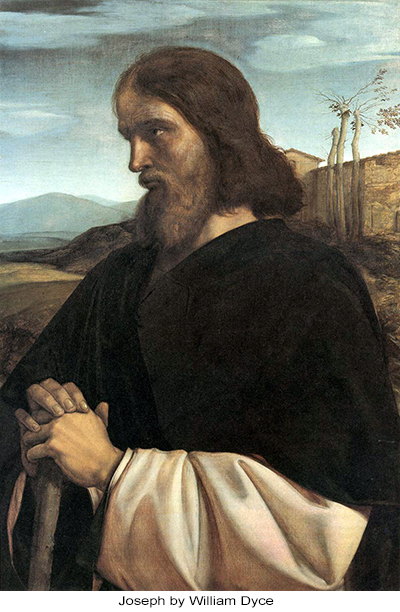 (126:2.1) All did go well until that fateful day of Tuesday, September 25, when a runner from Sepphoris brought to this Nazareth home the tragic news that Joseph had been severely injured by the falling of a derrick while at work on the governor's residence. The messenger from Sepphoris had stopped at the shop on the way to Joseph's home, informing Jesus of his father's accident, and they went together to the house to break the sad news to Mary. Jesus desired to go immediately to his father, but Mary would hear to nothing but that she must hasten to her husband's side. She directed that James, then ten years of age, should accompany her to Sepphoris while Jesus remained home with the younger children until she should return, as she did not know how seriously Joseph had been injured. But Joseph died of his injuries before Mary arrived. They brought him to Nazareth , and on the following day he was laid to rest with his fathers.

(126:2.8) But in spite of all that Jesus and the Nazareth neighbors could do to bring cheer into the home, Mary, and even the children, were overcast with sadness. Joseph was gone. Joseph was an unusual husband and father, and they all missed him. And it seemed all the more tragic to think that he died ere they could speak to him or hear his farewell blessing.

(126:3.12) Before the end of this year Mary saw the family funds diminishing. She turned the sale of doves over to James. Presently they bought a second cow, and with the aid of Miriam they began the sale of milk to their Nazareth neighbors.

(127:3.11) In September, Elizabeth and John came to visit the Nazareth family. John, having lost his father, intended to return to the Judean hills to engage in agriculture and sheep raising unless Jesus advised him to remain in Nazareth to take up carpentry or some other line of work. They did not know that the Nazareth family was practically penniless. The more Mary and Elizabeth talked about their sons, the more they became convinced that it would be good for the two young men to work together and see more of each other.

(127:3.14) For four years their standard of living had steadily declined; year by year they felt the pinch of increasing poverty. By the close of this year they faced one of the most difficult experiences of all their uphill struggles. James had not yet begun to earn much, and the expenses of a funeral on top of everything else staggered them. But Jesus would only say to his anxious and grieving mother: "Mother-Mary, sorrow will not help us; we are all doing our best, and mother's smile, perchance, might even inspire us to do better. Day by day we are strengthened for these tasks by our hope of better days ahead." His sturdy and practical optimism was truly contagious; all the children lived in an atmosphere of anticipation of better times and better things. And this hopeful courage contributed mightily to the development of strong and noble characters, in spite of the depressiveness of their poverty.