Mary Relies On Jesus As Head-Of-Household 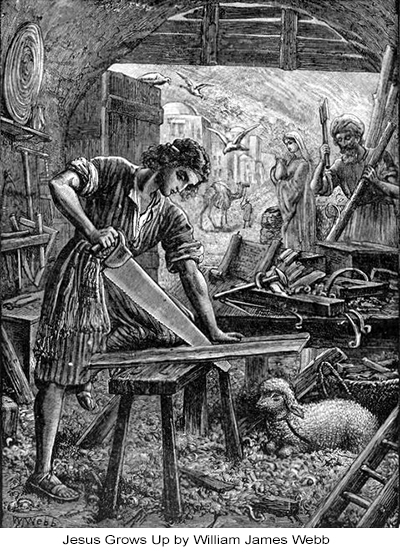 (127:1.4) As time went on, it became more difficult for his mother and his brothers and sisters to understand him; they stumbled over his sayings and misinterpreted his doings. They were all unfitted to comprehend their eldest brother's life because their mother had given them to understand that he was destined to become the deliverer of the Jewish people. After they had received from Mary such intimations as family secrets, imagine their confusion when Jesus would make frank denials of all such ideas and intentions.

(127:1.8) He was a real though youthful father to the family; he spent every possible hour with the youngsters, and they truly loved him. His mother grieved to see him work so hard; she sorrowed that he was day by day toiling at the carpenter's bench earning a living for the family instead of being, as they had so fondly planned, at Jerusalem studying with the rabbis. While there was much about her son that Mary could not understand, she did love him, and she most thoroughly appreciated the willing manner in which he shouldered the responsibility of the home.

(127:3.13) On Saturday afternoon, December 3, of this year, death for the second time struck at this Nazareth family. Little Amos, their baby brother, died after a week's illness with a high fever. After passing through this time of sorrow with her first-born son as her only support, Mary at last and in the fullest sense recognized Jesus as the real head of the family; and he was truly a worthy head.

(127:4.1) By this time Jesus and Mary were getting along much better. She regarded him less as a son; he had become to her more a father to her children. Each day's life swarmed with practical and immediate difficulties. Less frequently they spoke of his lifework, for, as time passed, all their thought was mutually devoted to the support and upbringing of their family of four boys and three girls.

(127:4.9) As time passed, Jesus did much to liberalize and modify the family teachings and practices related to Sabbath observance and many other phases of religion, and to all these changes Mary gave hearty assent. By this time Jesus had become the unquestioned head of the house.