Mary's Hopes And Fears Increase As Jesus Grows To Manhood 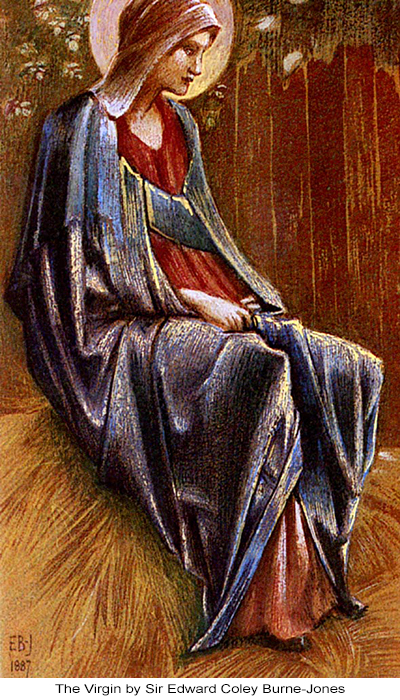 (125:6.13) [Mary] set to work with renewed energy to mold his thoughts into patriotic and nationalistic channels and enlisted the efforts of her brother, Jesus' favorite uncle; and in every other way did the mother of Jesus address herself to the task of preparing her first-born son to assume the leadership of those who would restore the throne of David and forever cast off the gentile yoke of political bondage.

(127:2.3) Mary did her best to induce him to enlist, but she could not budge him. She went so far as to intimate that his refusal to espouse the nationalist cause at her behest was insubordination, a violation of his pledge made upon their return from Jerusalem that he would be subject to his parents; but in answer to this insinuation he only laid a kindly hand on her shoulder and, looking into her face, said: "My mother, how could you?" And Mary withdrew her statement.

(127:5.1) Although Jesus was poor, his social standing in Nazareth was in no way impaired. He was one of the foremost young men of the city and very highly regarded by most of the young women. Since Jesus was such a splendid specimen of robust and intellectual manhood, and considering his reputation as a spiritual leader, it was not strange that Rebecca, the eldest daughter of Ezra, a wealthy merchant and trader of Nazareth, should discover that she was slowly falling in love with this son of Joseph. She first confided her affection to Miriam, Jesus' sister, and Miriam in turn talked all this over with her mother. Mary was intensely aroused. Was she about to lose her son, now become the indispensable head of the family? Would troubles never cease? What next could happen? And then she paused to contemplate what effect marriage would have upon Jesus' future career; not often, but at least sometimes, did [Mary] recall the fact that Jesus was a "child of promise." After she and Miriam had talked this matter over, they decided to make an effort to stop it before Jesus learned about it, by going direct to Rebecca, laying the whole story before her, and honestly telling her about their belief that Jesus was a son of destiny; that he was to become a great religious leader, perhaps the Messiah.

(127:6.8) It was during this year that Mary had a long talk with Jesus about marriage. She frankly asked him if he would get married if he were free from his family responsibilities. Jesus explained to her that, since immediate duty forbade his marriage, he had given the subject little thought. He expressed himself as doubting that he would ever enter the marriage state; he said that all such things must await "my hour," the time when "my Father's work must begin." Having settled already in his mind that he was not to become the father of children in the flesh, he gave very little thought to the subject of human marriage.

(128:3.8) Mary was much upset by Simon's report that Jesus spent most of the time when in Jerusalem" visiting with the strangers, especially those from the far countries." Jesus' family never could comprehend his great interest in people, his urge to visit with them, to learn about their way of living, and to find out what they were thinking about.

(128:7.5) Mary seldom spoke of Jesus' future mission. Whenever this subject was referred to, Jesus only replied, "My hour has not yet come." Jesus had about completed the difficult task of weaning his family from dependence on the immediate presence of his personality. He was rapidly preparing for the day when he could consistently leave this Nazareth home to begin the more active prelude to his real ministry for men.

(128:7.7) This year Jesus enjoyed more than usual leisure, and he devoted much time to training James in the management of the repair shop and Joseph in the direction of home affairs. Mary sensed that he was making ready to leave them. Leave them to go where? To do what? She had about given up the thought that Jesus was the Messiah. She could not understand him; she simply could not fathom her first-born son.

(128:7.10) In November a double wedding occurred. James and Esta, and Miriam and Jacob were married. It was truly a joyous occasion. Even Mary was once more happy except every now and then when she realized that Jesus was preparing to go away. She suffered under the burden of a great uncertainty: If Jesus would only sit down and talk it all over freely with her as he had done when he was a boy, but he was consistently uncommunicative; he was profoundly silent about the future.

(134:1.5) Jesus visited with the individual members of his family quite normally and naturally, but when they were all together, he had so little to say that they remarked about it among themselves. Mary especially was disconcerted by this unusually peculiar behavior of her first-born son.