When Is Jesus' Birthday? 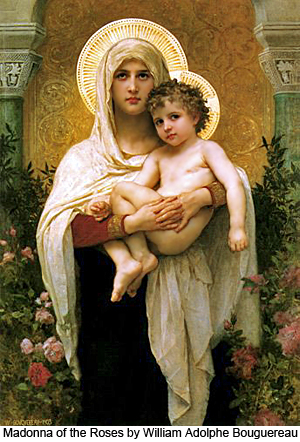 The Urantia Book says that Jesus was born "at noon, August 21, 7 B.C." (122:8.1). However, the authors do not say if this is a Julian Calendar date or a proleptic Gregorian Calendar date. That is, does the date refer to the calendar that was in use at that time; or does it refer to the current calendar, extended backward in time? More to the point, if Jesus' birthday is celebrated on August 21 of the current calendar, is that really the anniversary of his birth?

When the Julian Calendar was established, Julius Caesar set March 25 as the date of the vernal equinox, which was also taken by many people as the beginning of a new year. (The conception of Mithras —and subsequently, the incarnation of Jesus—was assumed to be at the start of a year, with the birth nine months later on December 25, the winter solstice.) Due to the imprecision of the Julian leap year system (viz., every fourth year, with the extra day added before February 25), the date of the vernal equinox drifted as the centuries passed. One of the goals of the calendar reform of Pope Gregory XIII was to reset the date of the vernal equinox to roughly the same date that it held at the time of the Council of Nicea in A.D. 325, when the original method for calculating the date of Easter was established. To that end, the day following Thursday, October 4, 1582 (in the Julian Calendar) was declared to be Friday, October 15, 1582, the first official date of the Gregorian Calendar.

Besides this ten-day difference between the Gregorian Calendar and the Julian Calendar, the Gregorian reform also introduced a new leap year system. A year is a leap year if it is divisible by 4, unless it is divisible by 100 but not 400; and the extra day is added after February 28. The Gregorian Calendar reform did not address the issue of when the numerical value of the year is incremented. In fact, January 1 was not universally recognized as New Year's Day until the early decades of the 20th century. It is now common practice to conceive of both the Julian Calendar and the Gregorian Calendar with January 1 as New Year's Day and the extra day in a leap year as February 29. In The Urantia Book, the year is incremented on January 1, rather than March 25. For example, consider the story of the beginning of the public ministry of Jesus and the twelve apostles. Paper 138 refers to the "five months of testing" for the apostles—personal work prior to the public work. This period is described as approximately the last five months of a year, namely, August to December of A.D. 26 (138:7.7, 138:8.1). Then, at the beginning of Paper 141, the public work is said to have begun on "January 19, A.D. 27". These facts definitely imply that January 1 is taken to be New Year's Day. Confirmation that the year does not increment on March 25 is given at the beginning of Paper 143. About five months after the start of the public ministry, and after spending some time in Jerusalem, Jesus and the twelve departed for Samaria" at the end of June, A.D. 27". Clearly, the year did not increment in March.

In this analysis, Julian dates will be indicated by "A.D." or "B.C." associated with the year; but Gregorian dates will use the Common Era, C.E., designation. (This is not to be confused with the C.E. and B.C.E. designations, meaning "Christian Era" and "Before Christian Era".) In the Common Era Calendar, the year number can be positive, negative, or zero (e.g., 1 B.C. is 0 C.E.). Since the Gregorian Calendar has fewer leap years, over the centuries, than the Julian Calendar, moving backward in time from October 15, 1582 C.E., the initial ten-day difference between the Julian Calendar and the proleptic Gregorian Calendar progressively decreases to zero. From March 1, A.D. 200 to February 28, A.D. 300, a given weekday has the same month and day in both calendars; and the Gregorian day is one less from March 1, A.D. 100 to February 29, A.D. 200.

Julius Caesar inaugurated his calendar reform in 46 B.C. However, he was killed in 44 B.C., before the occurrence of the first leap year under the new system. Those in charge of the Roman calendar misinterpreted the specification of the new leap years as being "on the fourth year", rather than "every four years". In ancient times, it was customary to count inclusively. For example, the resurrection of Jesus was "on the third day", Sunday. Friday, when he died, was counted as the first day. Although scholars agree that the first twelve leap years were every three years, they disagree about whether the first of those twelve was 43 B.C. or 42 B.C.; because 46 B.C. was an irregular year of 445 days, to transition from the previous calendar, making 45 B.C. the first regular Julian year. After the twelfth leap year (10 B.C. or 9 B.C.), Caesar Augustus clarified the counting of leap years and imposed a twelve-year moratorium on leap years (i.e., three leap years). Thus, depending on whether 10 B.C. or 9 B.C. was the last improper leap year, the first proper leap year was either A.D. 4 or A.D. 8, respectively.

Many of the dates in The Urantia Book include not only the month, the day, and the year, but also the weekday. For example, at the beginning of Paper 140, the ordination of the twelve is said to have occurred "on Sunday, January 12, A.D. 27". The inclusion of the weekday with the date indirectly indicates whether the date refers to the Julian Calendar or the proleptic Gregorian Calendar. It is a Julian date, because the Gregorian day of January 12 is Tuesday. Further indication that the dates in The Urantia Book are Julian dates, and that the authors are aware of the historical confusion about the early Julian calendar, is very ingeniously communicated by the authors, in keeping with the prohibition (in the revelatory mandate) against imparting unearned knowledge. Every B.C. date in The Urantia Book lacks an associated weekday; but the very first A.D. date, and almost every one after that, includes the weekday. Of particular interest, there are three A.D. dates prior to the possible leap day in A.D. 4, namely, Wednesday, March 16, A.D. 1 (123:4.9), Friday, April 14, A.D. 2 (123:6.7), and Thursday, September 13, A.D. 3 (124:1.7). The particular weekday specified with each of these dates implies that A.D. 4 was a leap year. If A.D. 4 had not been a leap year, then the weekdays would have been Thursday, Saturday, and Friday, respectively. Therefore, since A.D. 4 was a leap year, 10 B.C. was the last of the improper leap years before the hiatus.

Another benefit of ascertaining the actual leap years of the early Julian Calendar is the ability to assign weekdays to the B.C. dates in The Urantia Book. Jesus was born at 12:00 p.m. on Sunday, August 21, 7 B.C. (–6 C.E.). Curiously, the 2000th anniversary of Jesus' birth was also on a Sunday, August 21, 1994 C.E. There are only twelve other B.C. dates in The Urantia Book. Three of them are simply the three days of the journey of Joseph and Mary from Nazareth to Bethlehem, namely, Thursday to Saturday, August 18–20, 7 B.C. (122:7.4,6). The first full date that is given in The Urantia Book is the birth date of John the Baptist. Adding the weekday, that date is Friday, March 25, 7 B.C. (122:2.7). Interestingly, John was born on the day that many people considered to be New Year's Day. In that sense, his birth literally heralded the dawn of the year that Jesus was born.

Another three of the B.C. dates in The Urantia Book are those of the three conjunctions of Jupiter and Saturn during 7 B.C., namely, Sunday, May 29, Thursday, September 29, and Monday, December 5 (122:8.7). The next date is Tuesday, October 1, 4 B.C. (123:0.6), when Joseph had finally convinced everyone that it was time to return to Nazareth. Knowing that October 1 is a Tuesday, the trip to Nazareth most likely began on Sunday, October 6, 4 B.C. (123:0.6). Continuing forward in time, Jesus' brother James was born on Wednesday, April 2, 3 B.C. (123:1.5); Jesus received his Thought Adjuster on Wednesday, February 11, 2 B.C. (123:2.1); his sister Miriam was born on Saturday, July 11, 2 B.C. (123:2.3); and "Mary formally turned him over to Joseph for further instruction" (123:2.6) on Friday, August 21, 2 B.C., Jesus' fifth birthday. The next three specific dates in The Urantia Book are the three dates from A.D. 1, 2, and 3 that were mentioned above. They are the birth dates of Jesus' brothers Joseph and Simon and his sister Martha, respectively. Finally, the birth dates for James and Miriam have weekdays associated with them, just like the birth dates in The Urantia Book for all of the other six brothers and sisters of Jesus.

Why the 25th of December?

For centuries prior to Jesus' birth, people all over the world had celebrated around the time of the winter solstice. The Norse people in Northern Europe called their roughly twelve-day celebration of light and birth, yule. One of the yule traditions was to bring evergreens into the home, symbolizing life amid the darkness and cold of winter. Prefiguring Santa Claus, the god, Odin, was believed to ride the night skies, deciding who would prosper or perish in the new year.

Throughout the Roman Empire, the month-long celebration of the winter solstice by the lower classes was called Saturnalia, a time of feasting and revelry. But among the upper classes, the holiest day of the year was December 25, the birthday of Mithras, the sun god. This god of light was believed to have been born from the earth, paralleling Jesus' birth as "true man". Shepherds were said to have come to worship the young Mithras, after being told of his birth by angels.

Mithras was called the Mediator, because he was also the god of contracts and mutual obligation, again paralleling the Christian concept of Jesus as the mediator and new covenant between God and man. In addition, treaties were sanctioned by a common meal; so a common meal of bread and wine became a part of Mithraic worship services, very much like the remembrance supper. As a further parallel, at the end of his time on the earth, Mithras rode a chariot into heaven. In the Bible, Jesus' ascension is also depicted as a bodily ascent into the sky.

Early Christians did not celebrate Jesus' birth, only his resurrection; their focus was more on the Son of God, than the Son of Man. By the 4th century, many Christians believed that Jesus had been solely a spirit being; so the Church decided to begin celebrating Jesus' birth, to reinforce his humanity. However, by then, no one remembered the date of his birth. Since the birthday of Mithras was already a widely observed holy day, the Church simply declared December 25 to be the "Feast Day of the Nativity"; the feast day of the s u n became the feast day of the S o n. The Church also adopted and transformed many of the old winter solstice holiday traditions. For instance, to symbolize the temptation of Eve in the Garden of Eden, the indoor evergreen trees were decorated with apples, which became the Christmas tree balls of today. Decorations of holly became symbols of Jesus' crown of thorns.

Over the centuries, the celebration of Christmas has fallen in and out of favor with both the church and the state, its mixture of the sacred and the secular in constant contention with each other. Protestant churches in the United States did not begin to celebrate Christmas until the middle of the 19th century. History has shown that the need for celebration during the darkness of winter is deeply rooted in the human consciousness. Every generation gives birth to a new expression of the holiday. December 25 does not express the fact of Jesus' birth, but the spirit of rebirth that is the heart and history of Christmas certainly embodies the truth of the birth of an incarnate Son of the living God.