Mary Finds Jesus In The Temple 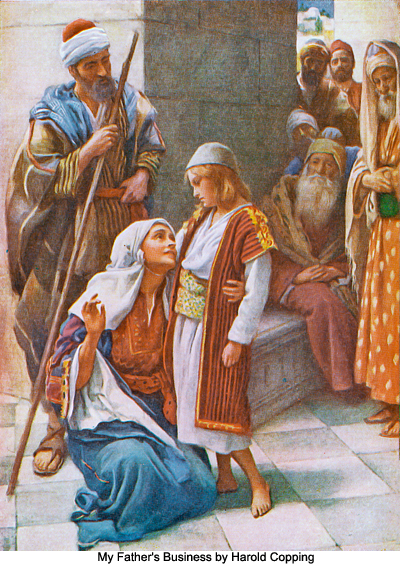 (125:3.1) It had been arranged that the Nazareth party should gather in the region of the temple at midforenoon on the first day of the week after the Passover festival had ended. This they did and started out on the return journey to Nazareth. Jesus had gone into the temple to listen to the discussions while his parents awaited the assembly of their fellow travelers. Presently the company prepared to depart, the men going in one group and the women in another as was their custom in journeying to and from the Jerusalem festivals. Jesus had gone up to Jerusalem in company with his mother and the women. Being now a young man of the consecration, he was supposed to journey back to Nazareth in company with his father and the men. But as the Nazareth party moved on toward Bethany, Jesus was completely absorbed in the discussion of angels, in the temple, being wholly unmindful of the passing of the time for the departure of his parents. And he did not realize that he had been left behind until the noontime adjournment of the temple conferences.

The Nazareth travelers did not miss Jesus because Mary surmised he journeyed with the men, while Joseph thought he traveled with the women since he had gone up to Jerusalem with the women, leading Mary's donkey. They did not discover his absence until they reached Jericho and prepared to tarry for the night. After making inquiry of the last of the party to reach Jericho and learning that none of them had seen their son, they spent a sleepless night, turning over in their minds what might have happened to him, recounting many of his unusual reactions to the events of Passover week, and mildly chiding each other for not seeing to it that he was in the group before they left Jerusalem.

(125:4.2) Early next day Jesus was up and on his way to the temple. On the brow of Olivet he paused and wept over the sight his eyes beheld—a spiritually impoverished people, tradition bound and living under the surveillance of the Roman legions. Early forenoon found him in the temple with his mind made up to take part in the discussions. Meanwhile, Joseph and Mary also had arisen with the early dawn with the intention of retracing their steps to Jerusalem. First, they hastened to the house of their relatives, where they had lodged as a family during the Passover week, but inquiry elicited the fact that no one had seen Jesus. After searching all day and finding no trace of him, they returned to their relatives for the night.

(125:5.1) Jesus' third day with the scribes and teachers in the temple witnessed the gathering of many spectators who, having heard of this youth from Galilee, came to enjoy the experience of seeing a lad confuse the wise men of the law. Simon also came down from Bethany to see what the boy was up to. Throughout this day Joseph and Mary continued their anxious search for Jesus, even going several times into the temple but never thinking to scrutinize the several discussion groups, although they once came almost within hearing distance of his fascinating voice.

(125:6.5) Joseph was speechless, but Mary gave vent to her long-pent-up fear and anxiety when, rushing up to the lad, now standing to greet his astonished parents, she said: "My child, why have you treated us like this? It is now more than three days that your father and I have searched for you sorrowing. Whatever possessed you to desert us?" It was a tense moment. All eyes were turned on Jesus to hear what he would say. His father looked reprovingly at him but said nothing.

(126:0.2) This important period in Jesus' youthful development began with the conclusion of the Jerusalem visit and with his return to Nazareth. At first Mary was happy in the thought that she had her boy back once more, that Jesus had returned home to be a dutiful son—not that he was ever anything else—and that he would henceforth be more responsive to her plans for his future life. But she was not for long to bask in this sunshine of maternal delusion and unrecognized family pride; very soon she was to be more completely disillusioned. More and more the boy was in the company of his father; less and less did he come to her with his problems, while increasingly both his parents failed to comprehend his frequent alternation between the affairs of this world and the contemplation of his relation to his Father's business. Frankly, they did not understand him, but they did truly love him.

(126:1.5) By the beginning of this year both Joseph and Mary entertained frequent doubts about the destiny of their first- born son. He was indeed a brilliant and lovable child, but he was so difficult to understand, so hard to fathom, and again, nothing extraordinary or miraculous ever happened. Scores of times had his proud mother stood in breathless anticipation, expecting to see her son engage in some superhuman or miraculous performance, but always were her hopes dashed down in cruel disappointment. And all this was discouraging, even disheartening. The devout people of those days truly believed that prophets and men of promise always demonstrated their calling and established their divine authority by performing miracles and working wonders. But Jesus did none of these things; wherefore was the confusion of his parents steadily increased as they contemplated his future.