Home Jesus The Women Who Followed Jesus Mary, Mother Of Jesus Events Of The Family Trip To Jerusalem For Passover

Events Of The Family Trip To Jerusalem For Passover 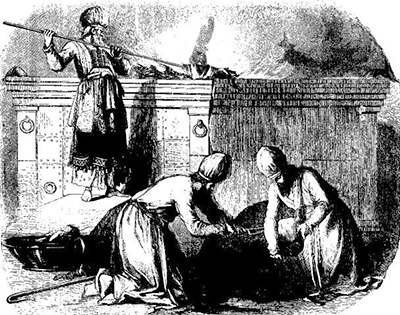 (124:6.7) The third day they passed by two villages which had been recently built by Herod and noted their superior architecture and their beautiful palm gardens. By nightfall they reached Jericho, where they remained until the morrow. That evening Joseph, Mary, and Jesus walked a mile and a half to the site of the ancient Jericho , where Joshua, for whom Jesus was named, had performed his renowned exploits, according to Jewish tradition.

(124:6.12) Soon they reached the place prearranged for their accommodation during the Passover week, the large home of a well-to-do relative of Mary's, one who knew something of the early history of both John and Jesus, through Zacharias. The following day, the day of preparation, they made ready for the appropriate celebration of the Passover Sabbath.

(125:1.5) Joseph saw how his son had sickened at the sight of the temple rites and wisely led him around to view the "gate beautiful," the artistic gate made of Corinthian bronze. But Jesus had had enough for his first visit at the temple. They returned to the upper court for Mary and walked about in the open air and away from the crowds for an hour, viewing the Asmonean palace, the stately home of Herod, and the tower of the Roman guards. During this stroll Joseph explained to Jesus that only the inhabitants of Jerusalem were permitted to witness the daily sacrifices in the temple, and that the dwellers in Galilee came up only three times a year to participate in the temple worship: at the Passover, at the feast of Pentecost (seven weeks after Passover), and at the feast of tabernacles in October. These feasts were established by Moses. They then discussed the two later established feasts of the dedication and of Purim. Afterward they went to their lodgings and made ready for the celebration of the Passover.

(125:2.1) Five Nazareth families were guests of, or associates with, the family of Simon of Bethany in the celebration of the Passover, Simon having purchased the paschal lamb for the company. It was the slaughter of these lambs in such enormous numbers that had so affected Jesus on his temple visit. It had been the plan to eat the Passover with Mary's relatives, but Jesus persuaded his parents to accept the invitation to go to Bethany.

(125:2.4) Jesus slept very little that night. His rest was greatly disturbed by revolting dreams of slaughter and suffering. His mind was distraught and his heart torn by the inconsistencies and absurdities of the theology of the whole Jewish ceremonial system. His parents likewise slept little. They were greatly disconcerted by the events of the day just ended. They were completely upset in their own hearts by the lad's, to them, strange and determined attitude. Mary became nervously agitated during the fore part of the night, but Joseph remained calm, though he was equally puzzled. Both of them feared to talk frankly with the lad about these problems, though Jesus would gladly have talked with his parents if they had dared to encourage him.

(125:2.11) Before Joseph and Mary left Jerusalem, in company with Jesus' Nazareth teacher they made definite arrangements for Jesus to return when he reached the age of fifteen to begin his long course of study in one of the best-known academies of the rabbis. Jesus accompanied his parents and teacher on their visits to the school, but they were all distressed to observe how indifferent he seemed to all they said and did. Mary was deeply pained at his reactions to the Jerusalem visit, and Joseph was profoundly perplexed at the lad's strange remarks and unusual conduct.