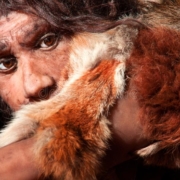 In an article on Archaeology.org, a new species of man should be re-named Homo bodoensis, after a 600,000-year-old skull found in Bodo D’ar, Ethiopia, in 1976. The classification of H. bodoensis would replace H. heidelbergensis and H. rhodesiensis, and include most of the fossils from this time period from Africa and the Eastern Mediterranean. Many of the fossils from Europe would then be reclassified as Neanderthals.”  Read More

The Urantia Book says: “In general and to start with, the Sangik tribes were more intelligent than, and in most ways far superior to, the deteriorated descendants of the early Andonic plainsmen; and the mingling of these Sangik tribes with the Neanderthal peoples led to the immediate improvement of the older race. It was this infusion of Sangik blood, more especially that of the blue man, which produced that marked improvement in the Neanderthal peoples exhibited by the successive waves of increasingly intelligent tribes that swept over Europe from the east.”  Read More

More Humans All Over the Universe

Urantia Book Forum and Other Ways to Interact at Truthbook.com
Scroll to top