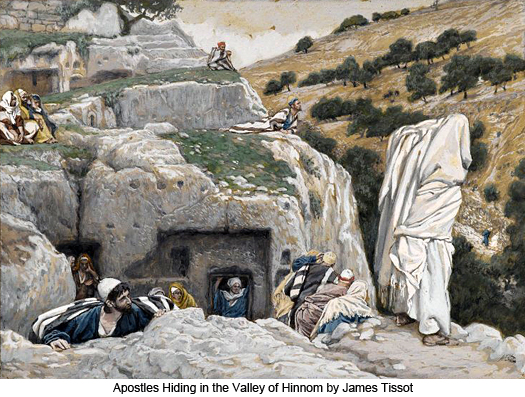 188:3.1 Throughout this Sabbath day the disciples and the apostles remained in hiding, while all Jerusalem discussed the death of Jesus on the cross. There were almost one and one-half million Jews present in Jerusalem at this time, hailing from all parts of the Roman Empire and from Mesopotamia. This was the beginning of the Passover week, and all these pilgrims would be in the city to learn of the resurrection of Jesus and to carry the report back to their homes.

188:3.2 Late Saturday night, John Mark summoned the eleven apostles secretly to come to the home of his father, where, just before midnight, they all assembled in the same upper chamber where they had partaken of the Last Supper with their Master two nights previously.

188:3.3 Mary the mother of Jesus, with Ruth and Jude, returned to Bethany to join their family this Saturday evening just before sunset. David Zebedee remained at the home of Nicodemus, where he had arranged for his messengers to assemble early Sunday morning. The women of Galilee, who prepared spices for the further embalming of Jesus' body, tarried at the home of Joseph of Arimathea.