Mary, Devoted Mother Of The Infant Child of Promise 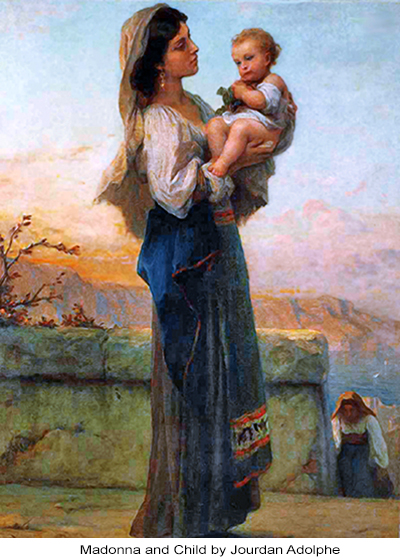 (122:10.4) The massacre of [the] infants took place about the middle of October, 6 B.C. , when Jesus was a little over one year of age. But there were believers in the coming Messiah even among Herod's court attachés, and one of these, learning of the order to slaughter the Bethlehem boy babies, communicated with Zacharias, who in turn dispatched a messenger to Joseph; and the night before the massacre Joseph and Mary departed from Bethlehem with the babe for Alexandria in Egypt. In order to avoid attracting attention, they journeyed alone to Egypt with Jesus. They went to Alexandria on funds provided by Zacharias, and there Joseph worked at his trade while Mary and Jesus lodged with well-to-do relatives of Joseph's family. They sojourned in Alexandria two full years, not returning to Bethlehem until after the death of Herod.

(123:0.2) All through these early years of Jesus' helpless infancy, Mary maintained one long and constant vigil lest anything befall her child which might jeopardize his welfare or in any way interfere with his future mission on earth; no mother was ever more devoted to her child. In the home where Jesus chanced to be there were two other children about his age, and among the near neighbors there were six others whose ages were sufficiently near his own to make them acceptable play-fellows. At first Mary was disposed to keep Jesus close by her side. She feared something might happen to him if he were allowed to play in the garden with the other children, but Joseph, with the assistance of his kinsfolk, was able to convince her that such a course would deprive Jesus of the helpful experience of learning how to adjust himself to children of his own age. And Mary , realizing that such a program of undue sheltering and unusual protection might tend to make him self-conscious and somewhat self-centered, finally gave assent to the plan of permitting the child of promise to grow up just like any other child ; and though she was obedient to this decision, she made it her business always to be on watch while the little folks were at play about the house or in the garden. Only an affectionate mother can know the burden that Mary carried in her heart for the safety of her son during these years of his infancy and early childhood.

Throughout the two years of their sojourn at Alexandria, Jesus enjoyed good health and continued to grow normally. Aside from a few friends and relatives no one was told about Jesus' being a "child of promise." One of Joseph's relatives revealed this to a few friends in Memphis, descendants of the distant Ikhnaton, and they, with a small group of Alexandrian believers, assembled at the palatial home of Joseph's relative-benefactor a short time before the return to Palestine to wish the Nazareth family well and to pay their respects to the child. On this occasion the assembled friends presented Jesus with a complete copy of the Greek translation of the Hebrew scriptures. But this copy of the Jewish sacred writings was not placed in Joseph's hands until both he and Mary had finally declined the invitation of their Memphis and Alexandrian friends to remain in Egypt. These believers insisted that the child of destiny would be able to exert a far greater world influence as a resident of Alexandria than of any designated place in Palestine. These persuasions delayed their departure for Palestine for some time after they received the news of Herod's death.

Owing to the uncertainties and anxieties of their sojourn in Bethlehem, Mary did not wean the babe until they had arrived safely in Alexandria, where the family was able to settle down to a normal life. They lived with kinsfolk, and Joseph was well able to support his family as he secured work shortly after their arrival. He was employed as a carpenter for several months and then elevated to the position of foreman of a large group of workmen employed on one of the public buildings then in process of construction. This new experience gave him the idea of becoming a contractor and builder after their return to Nazareth.

Joseph and Mary finally took leave of Alexandria on a boat belonging to their friend Ezraeon, bound for Joppa, arriving at that port late in August of the year 4 B.C. They went directly to Bethlehem , where they spent the entire month of September in counsel with their friends and relatives concerning whether they should remain there or return to Nazareth.

(123:0.5) Mary had never fully given up the idea that Jesus ought to grow up in Bethlehem, the City of David. Joseph did not really believe that their son was to become a kingly deliverer of Israel. Besides, he knew that he himself was not really a descendant of David; that his being reckoned among the offspring of David was due to the adoption of one of his ancestors into the Davidic line of descent. Mary, of course, thought the City of David the most appropriate place in which the new candidate for David's throne could be reared, but Joseph preferred to take chances with Herod Antipas rather than with his brother Archelaus. He entertained great fears for the child's safety in Bethlehem or in any other city in Judea, and surmised that Archelaus would be more likely to pursue the menacing policies of his father, Herod, than would Antipas in Galilee. And besides all these reasons, Joseph was outspoken in his preference for Galilee as a better place in which to rear and educate the child, but it required three weeks to overcome Mary's objections.

(123:1.7) In July of this year, one month before Jesus was four years old, an outbreak of malignant intestinal trouble spread over all Nazareth from contact with the caravan travelers. Mary became so alarmed by the danger of Jesus being exposed to this epidemic of disease that she bundled up both her children and fled to the country home of her brother, several miles south of Nazareth on the Megiddo road near Sarid. They did not return to Nazareth for more than two months; Jesus greatly enjoyed this, his first experience on a farm.