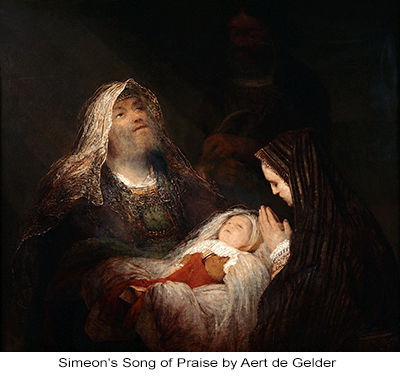 (122:8.1) All that night Mary was restless so that neither of them slept much. By the break of day the pangs of childbirth were well in evidence, and at noon, August 21, 7 B.C. , with the help and kind ministrations of women fellow travelers, Mary was delivered of a male child.

Jesus of Nazareth was born into the world, was wrapped in the clothes which Mary had brought along for such a possible contingency, and laid in a near-by manger.

(122:8.4) The second day after the birth of Jesus, Mary sent word to Elizabeth that her child had come and received word in return inviting Joseph up to Jerusalem to talk over all their affairs with Zacharias. The following week Joseph went to Jerusalem to confer with Zacharias. Both Zacharias and Elizabeth had become possessed with the sincere conviction that Jesus was indeed to become the Jewish deliverer, the Messiah, and that their son John was to be his chief of aides, his right-hand man of destiny. And since Mary held these same ideas, it was not difficult to prevail upon Joseph to remain in Bethlehem, the City of David , so that Jesus might grow up to become the successor of David on the throne of all Israel. Accordingly, they remained in Bethlehem more than a year, Joseph meantime working some at his carpenter's trade.

(122:8.6) These priests from Mesopotamia had been told sometime before by a strange religious teacher of their country that he had had a dream in which he was informed that "the light of life" was about to appear on earth as a babe and among the Jews. And thither went these three teachers looking for this "light of life." After many weeks of futile search in Jerusalem, they were about to return to Ur when Zacharias met them and disclosed his belief that Jesus was the object of their quest and sent them on to Bethlehem, where they found the babe and left their gifts with Mary, his earth mother. The babe was almost three weeks old at the time of their visit.

(122:9.1) Moses had taught the Jews that every first-born son belonged to the Lord, and that, in lieu of his sacrifice as was the custom among the heathen nations, such a son might live provided his parents would redeem him by the payment of five shekels to any authorized priest. There was also a Mosaic ordinance which directed that a mother, after the passing of a certain period of time, should present herself (or have someone make the proper sacrifice for her) at the temple for purification. It was customary to perform both of these ceremonies at the same time. Accordingly, Joseph and Mary went up to the temple at Jerusalem in person to present Jesus to the priests and effect his redemption and also to make the proper sacrifice to insure Mary's ceremonial purification from the alleged uncleanness of childbirth.

(122:9.3) Zacharias knew the day Joseph and Mary were expected to appear at the temple with Jesus, and he had prearranged with Simeon and Anna to indicate, by the salute of his upraised hand, which one in the procession of first- born children was Jesus.

For this occasion Anna had written a poem which Simeon proceeded to sing, much to the astonishment of Joseph, Mary, and all who were assembled in the temple courts. And this was their hymn of the redemption of the first-born son.

(122:9.28) On the way back to Bethlehem, Joseph and Mary were silent—confused and overawed. Mary was much disturbed by the farewell salutation of Anna, the aged poetess, and Joseph was not in harmony with this premature effort to make Jesus out to be the expected Messiah of the Jewish people.

(122:10.2) Joseph was afraid to seek work, and their small savings were rapidly disappearing. Even at the time of the purification ceremonies at the temple, Joseph deemed himself sufficiently poor to warrant his offering for Mary two young pigeons as Moses had directed for the purification of mothers among the poor.