Home Jesus The Women Who Followed Jesus Mary, Mother Of Jesus Mary And Joseph Return To Nazareth From Alexandria

Mary And Joseph Return To Nazareth From Alexandria 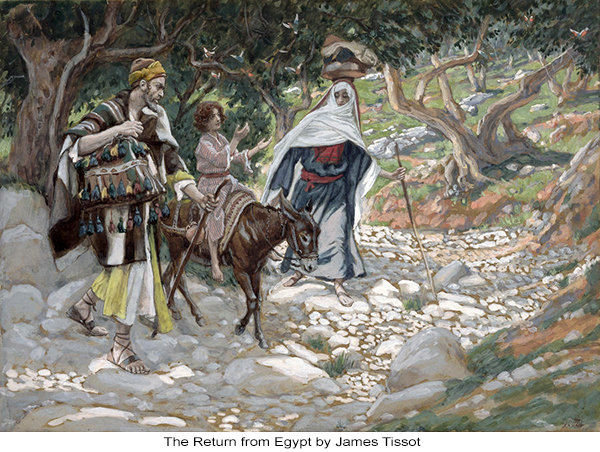 (123:0.6) By the first of October Joseph had convinced Mary and all their friends that it was best for them to return to Nazareth. Accordingly, early in October, 4 B.C., they departed from Bethlehem for Nazareth, going by way of Lydda and Scythopolis. They started out early one Sunday morning, Mary and the child riding on their newly acquired beast of burden, while Joseph and five accompanying kinsmen proceeded on foot; Joseph's relatives refused to permit them to make the trip to Nazareth alone. They feared to go to Galilee by Jerusalem and the Jordan valley, and the western routes were not altogether safe for two lone travelers with a child of tender years.

(123:1.1) On the fourth day of the journey the party reached its destination in safety. They arrived unannounced at the Nazareth home, which had been occupied for more than three years by one of Joseph's married brothers, who was indeed surprised to see them; so quietly had they gone about their business that neither the family of Joseph nor that of Mary knew they had even left Alexandria. The next day Joseph's brother moved his family, and Mary, for the first time since Jesus' birth, settled down with her little family to enjoy life in their own home. In less than a week Joseph secured work as a carpenter, and they were supremely happy.

(123:1.3) On the way to Nazareth Joseph had persuaded Mary that it would be unwise to spread the word among their Galilean friends and relatives that Jesus was a child of promise. They agreed to refrain from all mention of these matters to anyone. And they were both very faithful in keeping this promise.