Home Jesus The Women Who Followed Jesus Mary, Mother Of Jesus Mary Continues To Be An Influence On Jesus

Mary Continues To Be An Influence On Jesus 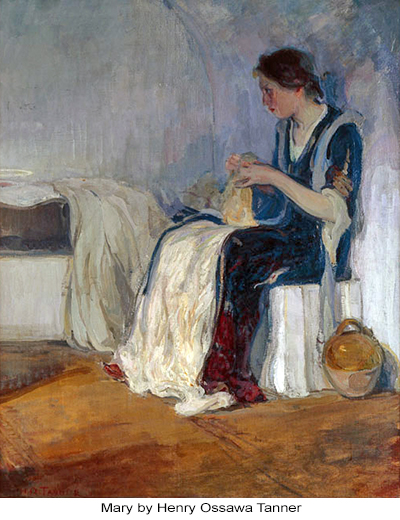 (123:3.1) Already, with his mother's help, Jesus had mastered the Galilean dialect of the Aramaic tongue; and now his father began teaching him Greek. Mary spoke little Greek, but Joseph was a fluent speaker of both Aramaic and Greek. The textbook for the study of the Greek language was the copy of the Hebrew scriptures —a complete version of the law and the prophets, including the Psalms —which had been presented to them on leaving Egypt. There were only two complete copies of the Scriptures in Greek in all Nazareth, and the possession of one of them by the carpenter's family made Joseph's home a much-sought place and enabled Jesus, as he grew up, to meet an almost endless procession of earnest students and sincere truth seekers. Before this year ended, Jesus had assumed custody of this priceless manuscript, having been told on his sixth birthday that the sacred book had been presented to him by Alexandrian friends and relatives. And in a very short time he could read it readily.

(123:3.6) During this year Joseph and Mary had trouble with Jesus about his prayers. He insisted on talking to his heavenly Father much as he would talk to Joseph, his earthly father. This departure from the more solemn and reverent modes of communication with Deity was a bit disconcerting to his parents, especially to his mother, but there was no persuading him to change; he would say his prayers just as he had been taught, after which he insisted on having "just a little talk with my Father in heaven."

(123:3.9) This year Jesus made great progress in adjusting his strong feelings and vigorous impulses to the demands of family co-operation and home discipline. Mary was a loving mother but a fairly strict disciplinarian. In many ways, however, Joseph exerted the greater control over Jesus as it was his practice to sit down with the boy and fully explain the real and underlying reasons for the necessity of disciplinary curtailment of personal desires in deference to the welfare and tranquillity of the entire family. When the situation had been explained to Jesus, he was always intelligently and willingly co-operative with parental wishes and family regulations.

(123:4.4) Mary maintained a dovecote on top of the animal house adjoining the home, and they used the profits from the sale of doves as a special charity fund, which Jesus administered after he deducted the tithe and turned it over to the officer of the synagogue.

(123:4.5) The only real accident Jesus had up to this time was a fall down the back-yard stone stairs which led up to the canvas-roofed bedroom. It happened during an unexpected July sandstorm from the east. The hot winds, carrying blasts of fine sand, usually blew during the rainy season, especially in March and April. It was extraordinary to have such a storm in July. When the storm came up, Jesus was on the housetop playing, as was his habit, for during much of the dry season this was his accustomed playroom. He was blinded by the sand when descending the stairs and fell. After this accident Joseph built a balustrade up both sides of the stairway.

There was no way in which this accident could have been prevented. It was not chargeable to neglect by the midway temporal guardians, one primary and one secondary midwayer having been assigned to the watchcare of the lad; neither was it chargeable to the guardian seraphim. It simply could not have been avoided. But this slight accident, occurring while Joseph was absent in Endor, caused such great anxiety to develop in Mary's mind that she unwisely tried to keep Jesus very close to her side for some months.

(124:1.4) But trouble was again stirred up at school when one of the more backward pupils discovered Jesus drawing a charcoal picture of the teacher on the floor of the schoolroom. There it was, plain as day, and many of the elders had viewed it before the committee went to call on Joseph to demand that something be done to suppress the lawlessness of his eldest son. And though this was not the first time complaints had come to Joseph and Mary about the doings of their versatile and aggressive child, this was the most serious of all the accusations which had thus far been lodged against him. Jesus listened to the indictment of his artistic efforts for some time, being seated on a large stone just outside the back door. He resented their blaming his father for his alleged misdeeds; so in he marched, fearlessly confronting his accusers. The elders were thrown into confusion. Some were inclined to view the episode humorously, while one or two seemed to think the boy was sacrilegious if not blasphemous. Joseph was nonplused, Mary indignant, but Jesus insisted on being heard. He had his say, courageously defended his viewpoint, and with consummate self-control announced that he would abide by the decision of his father in this as in all other matters controversial. And the committee of elders departed in silence.

Mary endeavored to influence Joseph to permit Jesus to model in clay at home, provided he promised not to carry on any of these questionable activities at school, but Joseph felt impelled to rule that the rabbinical interpretation of the second commandment should prevail. And so Jesus no more drew or modeled the likeness of anything from that day as long as he lived in his father's house. But he was unconvinced of the wrong of what he had done, and to give up such a favorite pastime constituted one of the great trials of his young life.