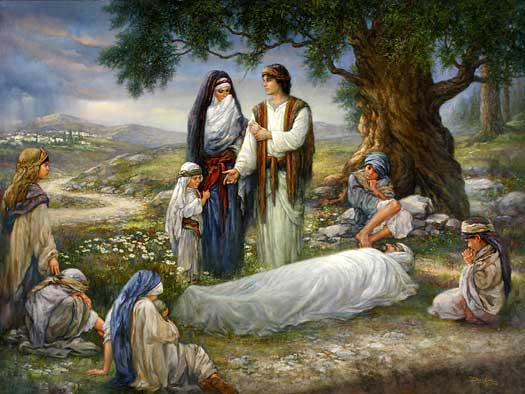 I love this article about Jesus early years, about which the world knows so little: Don’t forget the family of Jesus by Leslie Criss. My Urantia Book-based blog is below, but here’s a charming little snip from the article:

“Interesting, isn’t it? “Someone had to change his diapers.” Someone had to teach him Scripture and prayer. And yes, he had to learn love from somewhere. “Jesus grew wise and became strong. God was pleased with him and so were the people” (Luke 2:52). And it’s safe to assume it started because of what he learned from Mom, Dad and others. Wonder how the story might be different if Jesus had not grown up in a loving home?”

One of the best things about The Urantia Book is its revelations regarding Jesus early life – the years of his infancy, childhood, adolescence, young manhood, and adulthood – all before his public ministry which is pretty well-known.

I love the mental image in the paragraph above of Jesus having his diapers changed, his years of schooling, the loving home life that he enjoyed with Mary and Joseph. And it was a loving home. The celestials chose Jesus’ parents well. They provided a rock-solid foundation for the life of their “child of promise.”

Jesus did not just appear as a full-fledged Savior – not even as the full-fledged Son of God. His early experience as a human being was much like yours and mine. He had to learn to walk as a baby – he had to strive to talk and make himself understood – he had to go to school, and help around the house. He had playmates and adventures. He did not appear in this world knowing who he was; that knowledge came to him gradually. And before that knowledge came to him, he had to first grow up as a real human being.

Jesus was conceived in the normal way – yes, Mary and Joseph had sex! And Jesus was the result of that loving union. He was born in the normal way – he did not just suddenly appear outside of Mary’s body. She went into labor and expelled him from her womb, as all mother’s birth their children. She likely breast-fed him and fussed over him and cooed at him and sang to him. Joseph likely lifted him high up and made him laugh – maybe they played peek-a-boo with him. But most of all, they loved him and they provided a solid, safe, loving, and secure place for him to grow.

Mary and Joseph were young people; The Urantia Book tells us that Joseph was about 21 when he and Mary married. And with such a young couple who loved each other, it is not hard to imagine that they continued a normal married life – a married life that produced many children – this was long before the age of birth control pills! Jesus was the eldest of eight.

You can read all about the siblings of Jesus HERE.

And all of this early life of Jesus set the stage for one of the most interesting and significant parts of his life – the experience that followed in the wake of Joseph’s untimely death. Jesus was only a lad of fourteen when that tragedy befell the Nazareth home; he was the eldest child – the eldest son. And it fell to him to step up and grow up far faster than he might otherwise have done. He suddenly became the man of the house – protector for Mary, support for the home, and father-brother to his siblings. The Urantia Book tells us:

Having thus tasted the actual experience of living these adolescent years on a world beset by evil and distraught by sin, the Son of Man became possessed of full knowledge about the life experience of the youth of all the realms of Nebadon, and thus forever he became the understanding refuge for the distressed and perplexed adolescents of all ages and on all worlds throughout the local universe.

Slowly, but certainly and by actual experience, this divine Son is earning the right to become sovereign of his universe, the unquestioned and supreme ruler of all created intelligences on all local universe worlds, the understanding refuge of the beings of all ages and of all degrees of personal endowment and experience.

The most important part of all those years was the experience that Jesus gained by having to take on the mantle of father to his younger sisters and brothers. Later in his life, we realize that Jesus will never marry and have children of his own; nevertheless, the experiences he had during these trying years of adolescence provided this human Jesus with an opportunity to feelingly and experientially understand what parenthood was all about. And he was a master at it, despite his youth and the disappointments of having to become so suddenly responsible for so much.

By the time of Joseph’s death, Jesus had already received the message from on high that he was to be about the “Father’s business,” and we learn:

126:0.1 Of all Jesus’ earth-life experiences, the fourteenth and fifteenth years were the most crucial. These two years, after he began to be self-conscious of divinity and destiny, and before he achieved a large measure of communication with his indwelling Adjuster, were the most trying of his eventful life on Urantia. It is this period of two years which should be called the great test, the real temptation. No human youth, in passing through the early confusions and adjustment problems of adolescence, ever experienced a more crucial testing than that which Jesus passed through during his transition from childhood to young manhood.

When this tragedy befell the family, one might imagine that he may have been sorely confused in his deepest heart-of-hearts; and yet:

126:2.3 Jesus cheerfully accepted the responsibilities so suddenly thrust upon him, and he carried them faithfully to the end.

Parenthood is a subject that gets a lot of ink in The Urantia Book, but not a subject that we might readily associate with Jesus, unless we’ve read about it in its pages. First of all, we come to understand that the Fatherhood of God and the resultant brotherhood of all people is the bedrock of the gospel of the kingdom. The idea of the kingdom as a divine family is one that should thrill and comfort all of us because it places the reality of our relations with God into a family context – a perfect family context. .

Not everyone is blessed by loving parents or a successful family life; and yet, it is this very basic unit of society out of which whole civilizations are made. Jesus learned very early in his life how vital this family unit is; he was faced with the rigors and rewards – the failures and successes – the trials and victories of family life. As a child, he learned how to be a father from his earthly father, Joseph; he passed on these wise ways of fatherhood to his siblings, and later in his life, he taught the value and the reality of the Fatherhood of God to all who followed him.

And again, this should comfort all who have not had an ideal experience of child-parent relations. In my own life, discovering the “perfect parent,” aka The heavenly Father – his loving and forgiving nature, his longing to fellowship with me, his desire for my success in life – has made a big difference in the way I view myself and in the way I view everyone else, too. Even the people who I have had the most issues with growing up, I now view as simple children of God, like me.

This portion of Jesus’ life as a surrogate father to his orphaned siblings reveals aspects of the heavenly Father that are stunning in their tenderness and exemplary in their execution. And these are traits that can be imitated in our lives, helping us to become more like God. Moreover, this part of Jesus life helps us understand how much God loves us, too. After all, Jesus says more than once: “He who has seen me has seen the Father.” And in this demonstration of his own parenting experiences, we can much more easily see and accept that this is exactly how God acts with each of us, too.

There is a reason that the revelators tell us that we would do well to study the life of Jesus – and not just the public life that most people know. We learn:

2:0.1 The nature of God can best be understood by the revelation of the Father which Michael of Nebadon unfolded in his manifold teachings and in his superb mortal life in the flesh. The divine nature can also be better understood by man if he regards himself as a child of God and looks up to the Paradise Creator as a true spiritual Father.

The nature of God can be studied in a revelation of supreme ideas, the divine character can be envisaged as a portrayal of supernal ideals, but the most enlightening and spiritually edifying of all revelations of the divine nature is to be found in the comprehension of the religious life of Jesus of Nazareth, both before and after his attainment of full consciousness of divinity. If the incarnated life of Michael is taken as the background of the revelation of God to man, we may attempt to put in human word symbols certain ideas and ideals concerning the divine nature which may possibly contribute to a further illumination and unification of the human concept of the nature and the character of the personality of the Universal Father

In Jesus, we have a truly human brother-friend-father. Most importantly, we see in Jesus the human example of the Father’s tender love for his children. Studying this portion of his life alone can be of immeasurable help to any parent; and it can be a kind reminder that all of us have a perfect divine parent of our own.

These years are completely unknown as yet on our world, save to those who have discovered The Urantia Book. To learn more about this period of Jesus’ life, please see Papers 126: The Two Crucial Years and Paper 127: The Adolescent Years

Alone in the universe? Not a chance.

A Good God
Scroll to top