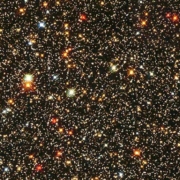 Are we alone in the universe? Of course not! Any Urantia Book reader can tell you that the cosmology of The Urantia Book presents a universe that is “teeming” with life. This article in Evolution News: Are We Alone in the Cosmos? Here’s a Real Paradox for You, explores this topic with emphasis on the concept of intelligent design, and most especially the idea that if we are not alone, why we do not have any contact with other life in the universe. It is an interesting article; it might be a little technical, but I think we can all appreciate the ideas presented. We’ll blog on these fascinating ideas below, but first:

“Astrophysicist Ethan Siegel writing at Forbes delivers a bracing chastisement to seemingly scientific efforts to estimate the probability of extraterrestrial intelligence (ETI) in the cosmos. The case in point is a preprint paper by Sandberg, Drexler, and Ord of the Future of Humanity Institute, Oxford University, claiming to “dissolve the Fermi paradox.”

“The Fermi paradox represents the problem of why ETI ought to be abundant yet gives no sign of itself.”

“The probability of the origin of life without design or guidance is not unknown. It’s effectively zero.

“Yet here’s a real paradox for you. Allowing design as an option actually increases the chances of extraterrestrial intelligence, since there is then a way to overcome the extremely remote probabilities. If there is ETI out there, it’s thanks to ID” (Intelligent Design ed.)

The search for intelligent life elsewhere in our universe is relentless; the human mind and spirit longs to know whether we are truly alone on this small planet in what we now know is the outskirts of a very large universe. For reasons explained below, those feelings that some have about our seemingly lonely existence here are justified. In some ways, we ARE alone. But not in the way you might think.

The Hubble Telescope has opened the world’s eyes to the vastness of the universe. Could it be that we are the only intelligent life in all this vastness of countless galaxies and suns? But if we are not alone, where is everybody? Why do we not know about them? Why are they not communicating with us? Are they looking for us like we are looking for them.?

Creationism is defined thus: “the belief that the universe and living organisms originate from specific acts of divine creation, as in the biblical account, rather than by natural processes such as evolution.” Creationism would have us believe, for example, that the world was literally created in six days.

Here is the whole passage:

Is there a divine purpose to life?

The designs of life itself are formulated by Life Carriers and fostered through eons of evolution to produce beings who can love God and be loved by him in return. These high Sons of God formulated the life we now enjoy here – our bodies and our minds are the culmination of millions of years of evolutionary progress.

2:2.5 And the whole scheme of living existences on the worlds of space is centered in the divine purpose of elevating all will creatures to the high destiny of the experience of sharing the Father’s Paradise perfection. God is neither self-centered nor self-contained; he never ceases to bestow himself upon all self-conscious creatures of the vast universe of universes.

But why do we feel so alone? Where is everybody?

The answer to this question is supplied in the teachings of The Urantia Book. The answers lie in our very checkered and turbulent past, covered most extensively in Part II (The Local Universe) and Part III (The History of Urantia), wherein we find the sad, tumultuous story of the Lucifer rebellion, followed by the equally sad story of Adam and Eve and their default.

The Lucifer rebellion resulted in our world being quarantined from the rest of the universe. We were quarantined from the rest of the universe just as an infectious person is isolated from the healthy population – so as not to spread the disease. And that quarantine means (among other things) that we do not have the luxury of celestial communication – universe broadcasts that are common on more normal worlds. These communications are assurance that a world is connected to the whole; just as a local township receives news feeds from all parts of the nation, evolutionary worlds like ours are kept informed of universal events. Unfortunately, quarantined worlds do not receive these newscasts, so we find ourselves cut off and in the dark in significant ways.

In addition, the rebellion disrupted the spiritual advancement of mankind; confusion reigned and spiritual darkness followed. And we still feel the effects of the rebellion today – half a million years later. Disbelief in God, unbridled liberty, self-assertion…these are some of the earmarks of Lucifers sophistries, and easy to see in today’s headlines.

Click for the story of Lucifer and his disastrous rebellion

The default of Adam and Eve and their untimely abandonment of their mission is a further blow to us, as we have lost the presence of these two beings whose job it would have been (had they succeeded) to establish a permanent cultural center of spiritual, educational, and civilizational assistance for the upliftment of the races of mankind. Can you imagine what a blessing it might be to have such a place here on Urantia? Again, we find ourselves quite alone in the material sense without this pair.

Click for the complete story of Adam and Eve

The truth is that there are millions of inhabited planets out there. They likely know quite a bit about us, but we know next to nothing about them. The Urantia Book does give us an idea of one such planet in Paper 72: Government on a Neighboring Planet; and we are told that there is an inhabited planet in “close proximity” to us, but it may be many years before we are able to discover the truth of that revelation for ourselves. In the meantime, we send out our probes and we listen intently for patterns that may indicate life.

To read the cosmology of the universe as presented in The Urantia Book is an enlightening and reassuring activity; to know that we truly are NOT alone in this universe, and that our little world – scarred by rebellion and darkened by sin – is still as lovingly fostered as if it were the only world in existence:

While we may have to wait some time before our scientific explorations corroborate Urantia Book teachings about the cosmos, the sudy of cosmology in The Urantia Book, together with the remainder of the revelatory information it offers, gives the seeker a solid and reassuring foundation from which to approach life. The knowledge that we are – not only NOT alone – but members of a vast, cosmic, spiritual civilization that permeates the universe, should give all of God’s children reason to celebrate.

The most important evidence that we are not alone

Even though we suffer under the effects of quarantine, we are still intimately associated with the largest reality of all – the Spirit of God himself dwells with each of us and lives life with each of us, guiding and assisting us in just the measure to which we accept such a reality. Despite all appearances to the contrary, we have never been forsaken nor forgotten, for this good spirit assures us that we will never be alone.

Further, we all carry within us Jesus’ Spirit of Truth that helps us to discern the truths of revelation and dispels our feelings of “orphanhood:”

“The first mission of this spirit is, of course, to foster and personalize truth, for it is the comprehension of truth that constitutes the highest form of human liberty. Next, it is the purpose of this spirit to destroy the believer’s feeling of orphanhood. Jesus having been among men, all believers would experience a sense of loneliness had not the Spirit of Truth come to dwell in men’s hearts.”

And so, in some ways we may feel alone because sometimes we have to work hard at finding God, at finding true meaning and purpose and at overcoming the darkness and evil that surround us, but in all ways that really matter, we are never alone. The Indwelling Adjuster, the Spirit of Truth, the ministry of the Holy Spirit – all of these spiritual guides are with us always…our cosmic spiritual family, so to speak – Father God, brother Jesus, and Mother Spirit

Not only that, but as a pretty nice compensation for all that this planet has suffered, Urantia has been gifted with an archangel headquarters located on the planet consisting of 12 separate corps of angels who work tirelessly on our behalf.

And we have The Urantia Book now to further relieve our feelings of aloneness, too. In its pages, we read of the wonder of the cosmos and we find out the truth of who we are and how we got here and where we are going. We can choose to identify ourselves with God and join the spiritual civilization that permeates his creation as the cosmic citizens that we are. And we can rejoice that this wonderful revelation gives us a perspective from which to view ourselves and our universe in a unique and helpful way.

114:7.17 Your isolated world is not forgotten in the counsels of the universe. Urantia is not a cosmic orphan stigmatized by sin and shut away from divine watchcare by rebellion. From Uversa to Salvington and on down to Jerusalem, even in Havona and on Paradise, they all know we are here; and you mortals now dwelling on Urantia are just as lovingly cherished and just as faithfully watched over as if the sphere had never been betrayed by a faithless Planetary Prince, even more so. It is eternally true, “the Father himself loves you.”

Of Asteroids and ExomoonsJesus and the parenting experience
Scroll to top