The Default Of Adam And Eve 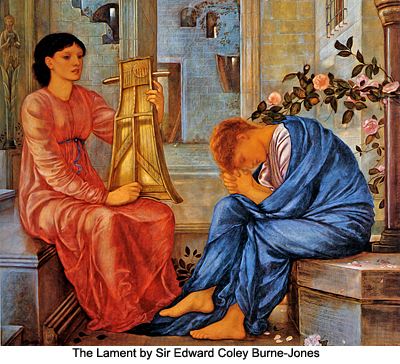 Many factors contributed to the failure of Adam and Eve's purpose on this world. Notably; the groundwork that should have been laid in the psyches of the native peoples and the foundation of an enduring civilization were absent due to the previous default of Caligastia, the universe appointed Planetary Prince and intended spiritual administrator of the planet.

Additionally, the native peoples of earth were prone to worship Adam and Eve as gods rather than to participate with them as teachers and students. They were overawed by the presence and countenance of Adam and Eve and this was a constant obstacle to working efficiently and effectively with them.

Also of note were the primitive living conditions on Earth being even more severe than Adam and Eve were prepared to endure as well as isolation (as a result of planetary quarantine) leaving the couple without benefit of any true peer counsel.

Impatience at the slowness of actual progress plus the goadings of the deposed, invisible and rebellious planetary prince convinced Adam and Eve to deviate from the established and divine plan for the slow but certain biological uplifting of the races.

Adam and Eve were ruled as being in default of their mission, were expelled from their first garden home and deprived of the tree of life energies that would have made their bodies continuously self-regenerative.

The human race received only a portion of the hereditary improvements that Adam's genetics would have and should have provided. Viruses, diseases, allergies, genetic defects are but some of the afflictions attributable to not having received the full biologic improvements Adam and Eve would have genetically infused.

The "golden age" is a myth, but Eden was a fact, and the Garden civilization was actually overthrown. Adam and Eve carried on in the Garden for one hundred and seventeen years when, through the impatience of Eve and the errors of judgment of Adam, they presumed to turn aside from the ordained way, speedily bringing disaster upon themselves and ruinous retardation upon the developmental progression of all Urantia. (Click to read more 74:8.14)

After more than one hundred years of effort, Adam was able to see very little progress outside the Garden; the world at large did not seem to be improving much. The realization of race betterment appeared to be a long way off, and the situation seemed so desperate as to demand something for relief not embraced in the original plans. At least that is what often passed through Adam's mind, and he so expressed himself many times to Eve. Adam and his mate were loyal, but they were isolated from their kind, and they were sorely distressed by the sorry plight of their world. (Click to read more 75:0.0)

Adam and Eve found themselves on a sphere wholly unprepared for the proclamation of the brotherhood of man, a world groping about in abject spiritual darkness and cursed with confusion worse confounded by the miscarriage of the mission of the preceding administration. Mind and morals were at a low level, and instead of beginning the task of effecting religious unity, they must begin all anew the work of converting the inhabitants to the most simple forms of religious belief. Instead of finding one language ready for adoption, they were confronted by the world-wide confusion of hundreds upon hundreds of local dialects. No Adam of the planetary service was ever set down on a more difficult world; the obstacles seemed insuperable and the problems beyond creature solution.

They were isolated, and the tremendous sense of loneliness which bore down upon them was all the more heightened by the early departure of the Melchizedek receivers. Only indirectly, by means of the angelic orders, could they communicate with any being off the planet. Slowly their courage weakened, their spirits drooped, and sometimes their faith almost faltered.

And this is the true picture of the consternation of these two noble souls as they pondered the tasks which confronted them. They were both keenly aware of the enormous undertaking involved in the execution of their planetary assignment.

Probably no Material Sons of Nebadon were ever faced with such a difficult and seemingly hopeless task as confronted Adam and Eve in the sorry plight of this world. But they would have sometime met with success had they been more farseeing and patient. Both of them, especially Eve, were altogether too impatient; they were not willing to settle down to the long, long endurance test. They wanted to see some immediate results, and they did, but the results thus secured proved most disastrous both to themselves and to their world.