Home Adam And Eve The Forbidden Fruit - What About The Serpent And The Apple?

The Forbidden Fruit - What About The Serpent And The Apple? 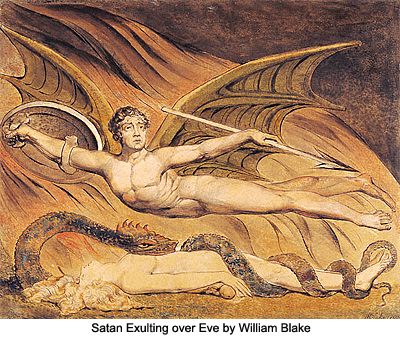 Prince Caligastia was originally to have been the spiritual head of the planet. Hundreds of thousands of years before Adam and Eve's arrival he was swept into a rebellion against the government of God that broke out among a small group of 37 inhabited worlds. He has long been known in our legend and lore as The devil and The Prince of Darkness. As a result of the outbreak of rebellion earth and 36 of the other worlds involved were isolated and quarantined. Caligastia remained, doing all he could to thwart any plans to restore Earth to God's evolutionary plan of perfection. He was, of course, instrumental in bringing about the default of our material universe ambassadors, Adam and Eve.

Caligastia paid frequent visits to the Garden and held many conferences with Adam and Eve, but they were adamant to all his suggestions of compromise and short-cut adventures. They had before them enough of the results of rebellion to produce effective immunity against all such insinuating proposals. Even the young offspring of Adam were uninfluenced by the overtures of Daligastia. And of course neither Caligastia nor his associate had power to influence any individual against his will, much less to persuade the children of Adam to do wrong.

It must be remembered that Caligastia was still the titular Planetary Prince of Urantia, a misguided but nevertheless high Son of the local universe. He was not finally deposed until the times of Christ Michael on Urantia.

But the fallen Prince was persistent and determined. He soon gave up working on Adam and decided to try a wily flank attack on Eve. The evil one concluded that the only hope for success lay in the adroit employment of suitable persons belonging to the upper strata of the Nodite group, the descendants of his onetime corporeal-staff associates. And the plans were accordingly laid for entrapping the mother of the violet race.

It was farthest from Eve's intention ever to do anything which would militate against Adam's plans or jeopardize their planetary trust. Knowing the tendency of woman to look upon immediate results rather than to plan farsightedly for more remote effects, the Melchizedeks, before departing, had especially enjoined Eve as to the peculiar dangers besetting their isolated position on the planet and had in particular warned her never to stray from the side of her mate, that is, to attempt no personal or secret methods of furthering their mutual undertakings. Eve had most scrupulously carried out these instructions for more than one hundred years, and it did not occur to her that any danger would attach to the increasingly private and confidential visits she was enjoying with a certain Nodite leader named Serapatatia. The whole affair developed so gradually and naturally that she was taken unawares.

The Garden dwellers had been in contact with the Nodites since the early days of Eden. From these mixed descendants of the defaulting members of Caligastia's staff they had received much valuable help and co-operation, and through them the Edenic regime was now to meet its complete undoing and final overthrow. (Click to read more 75:2.2) 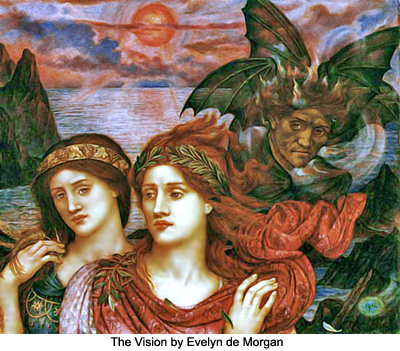 THE TEMPTATION OF EVE

Adam had just finished his first one hundred years on earth when Serapatatia, upon the death of his father, came to the leadership of the western or Syrian confederation of the Nodite tribes. Serapatatia was a brown-tinted man, a brilliant descendant of the onetime chief of the Dalamatia commission on health mated with one of the master female minds of the blue race of those distant days. All down through the ages this line had held authority and wielded a great influence among the western Nodite tribes.

Serapatatia had made several visits to the Garden and had become deeply impressed with the righteousness of Adam's cause. And shortly after assuming the leadership of the Syrian Nodites, he announced his intention of establishing an affiliation with the work of Adam and Eve in the Garden. The majority of his people joined him in this program, and Adam was cheered by the news that the most powerful and the most intelligent of all the neighboring tribes had swung over almost bodily to the support of the program for world improvement; it was decidedly heartening. And shortly after this great event, Serapatatia and his new staff were entertained by Adam and Eve in their own home.

Serapatatia became one of the most able and efficient of all of Adam's lieutenants. He was entirely honest and thoroughly sincere in all of his activities; he was never conscious, even later on, that he was being used as a circumstantial tool of the wily Caligastia.

Presently, Serapatatia became the associate chairman of the Edenic commission on tribal relations, and many plans were laid for the more vigorous prosecution of the work of winning the remote tribes to the cause of the Garden.

He held many conferences with Adam and Eve — especially with Eve — and they talked over many plans for improving their methods. One day, during a talk with Eve, it occurred to Serapatatia that it would be very helpful if, while awaiting the recruiting of large numbers of the violet race, something could be done in the meantime immediately to advance the needy waiting tribes. Serapatatia contended that, if the Nodites, as the most progressive and co-operative race, could have a leader born to them of part origin in the violet stock, it would constitute a powerful tie binding these peoples more closely to the Garden. And all of this was soberly and honestly considered to be for the good of the world since this child, to be reared and educated in the Garden, would exert a great influence for good over his father's people.

It should again be emphasized that Serapatatia was altogether honest and wholly sincere in all that he proposed. He never once suspected that he was playing into the hands of Caligastia and Daligastia. Serapatatia was entirely loyal to the plan of building up a strong reserve of the violet race before attempting the world-wide upstepping of the confused peoples of the world. But this would require hundreds of years to consummate, and he was impatient; he wanted to see some immediate results — something in his own lifetime. He made it clear to Eve that Adam was oftentimes discouraged by the little that had been accomplished toward uplifting the world.

For more than five years these plans were secretly matured. At last they had developed to the point where Eve consented to have a secret conference with Cano, the most brilliant mind and active leader of the near-by colony of friendly Nodites. Cano was very sympathetic with the Adamic regime; in fact, he was the sincere spiritual leader of those neighboring Nodites who favored friendly relations with the Garden.

The fateful meeting occurred during the twilight hours of the autumn evening, not far from the home of Adam. Eve had never before met the beautiful and enthusiastic Cano — and he was a magnificent specimen of the survival of the superior physique and outstanding intellect of his remote progenitors of the Prince's staff. And Cano also thoroughly believed in the righteousness of the Serapatatia project. (Outside of the Garden, multiple mating was a common practice.)

Influenced by flattery, enthusiasm, and great personal persuasion, Eve then and there consented to embark upon the much-discussed enterprise, to add her own little scheme of world saving to the larger and more far-reaching divine plan. Before she quite realized what was transpiring, the fatal step had been taken. It was done. (Click to read more 75:2.3)