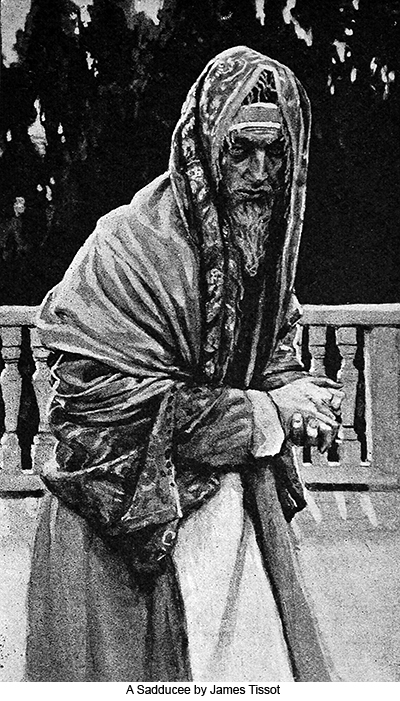 174:3.1 Before Jesus could get started with his teaching, another group came forward to question him, this time a company of the learned and crafty Sadducees. Their spokesman, drawing near to him, said: "Master, Moses said that if a married man should die, leaving no children, his brother should take the wife and raise up seed for the deceased brother. Now there occurred a case where a certain man who had six brothers died childless; his next brother took his wife but also soon died, leaving no children. Likewise did the second brother take the wife, but he also died leaving no offspring. And so on until all six of the brothers had had her, and all six of them passed on without leaving children. And then, after them all, the woman herself died. Now, what we would like to ask you is this: In the resurrection whose wife will she be since all seven of these brothers had her?"

174:3.2 Jesus knew, and so did the people, that these Sadducees were not sincere in asking this question because it was not likely that such a case would really occur; and besides, this practice of the brothers of a dead man seeking to beget children for him was practically a dead letter at this time among the Jews. Nevertheless, Jesus condescended to reply to their mischievous question. He said: "You all do err in asking such questions because you know neither the Scriptures nor the living power of God. You know that the sons of this world can marry and are given in marriage, but you do not seem to understand that they who are accounted worthy to attain the worlds to come, through the resurrection of the righteous, neither marry nor are given in marriage. Those who experience the resurrection from the dead are more like the angels of heaven and they never die. These resurrected ones are eternally the sons of God; they are the children of light resurrected into the progress of eternal life. And even your Father Moses understood this, for, in connection with his experiences at the burning bush, he heard the Father say, `I am the God of Abraham, the God of Isaac, and the God of Jacob.' And so, along with Moses, do I declare that my Father is not the God of the dead but of the living. In him you all do live, reproduce, and possess your mortal existence."

174:3.3 When Jesus had finished answering these questions, the Sadducees withdrew, and some of the Pharisees so far forgot themselves as to exclaim, "True, true, Master, you have well answered these unbelieving Sadducees." The Sadducees dared not ask him any more questions, and the common people marveled at the wisdom of his teaching.

174:4.1 Another group of Sadducees had been instructed to ask Jesus entangling questions about angels, but when they beheld the fate of their comrades who had sought to entrap him with questions concerning the resurrection, they very wisely decided to hold their peace; they retired without asking a question. It was the prearranged plan of the confederated Pharisees, scribes, Sadducees, and Herodians to fill up the entire day with these entangling questions, hoping thereby to discredit Jesus before the people and at the same time effectively to prevent his having any time for the proclamation of his disturbing teachings.