Jesus Ponders His Mission - The "Son Of Man" 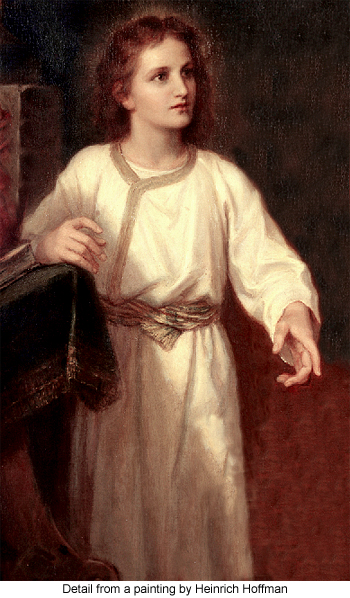 126:3.5 This year Jesus was much troubled with confused thinking. Family responsibility had quite effectively removed all thought of immediately carrying out any plan for responding to the Jerusalem visitation directing him to "be about his Father's business." Jesus rightly reasoned that the watchcare of his earthly father's family must take precedence of all duties; that the support of his family must become his first obligation.

126:3.6 In the course of this year Jesus found a passage in the so-called Book of Enoch which influenced him in the later adoption of the term "Son of Man" as a designation for his bestowal mission on Urantia. He had thoroughly considered the idea of the Jewish Messiah and was firmly convinced that he was not to be that Messiah. He longed to help his father's people, but he never expected to lead Jewish armies in overthrowing the foreign domination of Palestine. He knew he would never sit on the throne of David at Jerusalem. Neither did he believe that his mission was that of a spiritual deliverer or moral teacher solely to the Jewish people. In no sense, therefore, could his life mission be the fulfillment of the intense longings and supposed Messianic prophecies of the Hebrew scriptures; at least, not as the Jews understood these predictions of the prophets. Likewise he was certain he was never to appear as the Son of Man depicted by the Prophet Daniel.

126:3.7 But when the time came for him to go forth as a world teacher, what would he call himself? What claim should he make concerning his mission? By what name would he be called by the people who would become believers in his teachings?

126:3.8 While turning all these problems over in his mind, he found in the synagogue library at Nazareth, among the apocalyptic books which he had been studying, this manuscript called "The Book of Enoch"; and though he was certain that it had not been written by Enoch of old, it proved very intriguing to him, and he read and reread it many times. There was one passage which particularly impressed him, a passage in which this term "Son of Man" appeared. The writer of this so-called Book of Enoch went on to tell about this Son of Man, describing the work he would do on earth and explaining that this Son of Man, before coming down on this earth to bring salvation to mankind, had walked through the courts of heavenly glory with his Father, the Father of all; and that he had turned his back upon all this grandeur and glory to come down on earth to proclaim salvation to needy mortals. As Jesus would read these passages (well understanding that much of the Eastern mysticism which had become admixed with these teachings was erroneous), he responded in his heart and recognized in his mind that of all the Messianic predictions of the Hebrew scriptures and of all the theories about the Jewish deliverer, none was so near the truth as this story tucked away in this only partially accredited Book of Enoch; and he then and there decided to adopt as his inaugural title "the Son of Man." And this he did when he subsequently began his public work. Jesus had an unerring ability for the recognition of truth, and truth he never hesitated to embrace, no matter from what source it appeared to emanate.

126:3.9 By this time he had quite thoroughly settled many things about his forthcoming work for the world, but he said nothing of these matters to his mother, who still held stoutly to the idea of his being the Jewish Messiah.

126:3.10 The great confusion of Jesus' younger days now arose. Having settled something about the nature of his mission on earth, "to be about his Father's business"—to show forth his Father's loving nature to all mankind—he began to ponder anew the many statements in the Scriptures referring to the coming of a national deliverer, a Jewish teacher or king. To what event did these prophecies refer? Was not he a Jew? or was he? Was he or was he not of the house of David? His mother averred he was; his father had ruled that he was not. He decided he was not. But had the prophets confused the nature and mission of the Messiah?

126:3.11 After all, could it be possible that his mother was right? In most matters, when differences of opinion had arisen in the past, she had been right. If he were a new teacher and not the Messiah, then how should he recognize the Jewish Messiah if such a one should appear in Jerusalem during the time of his earth mission; and, further, what should be his relation to this Jewish Messiah? And what should be his relation, after embarking on his life mission, to his family? to the Jewish commonwealth and religion? to the Roman Empire? to the gentiles and their religions? Each of these momentous problems this young Galilean turned over in his mind and seriously pondered while he continued to work at the carpenter's bench, laboriously making a living for himself, his mother, and eight other hungry mouths.

126:3.13 His profound periods of meditation, his frequent journeys to the hilltop for prayer, and the many strange ideas which Jesus advanced from time to time, thoroughly alarmed his mother. Sometimes she thought the lad was beside himself, and then she would steady her fears, remembering that he was, after all, a child of promise and in some manner different from other youths.

126:3.14 But Jesus was learning not to speak of all his thoughts, not to present all his ideas to the world, not even to his own mother. From this year on, Jesus' disclosures about what was going on in his mind steadily diminished; that is, he talked less about those things which an average person could not grasp, and which would lead to his being regarded as peculiar or different from ordinary folks. To all appearances he became commonplace and conventional, though he did long for someone who could understand his problems. He craved a trustworthy and confidential friend, but his problems were too complex for his human associates to comprehend. The uniqueness of the unusual situation compelled him to bear his burdens alone.