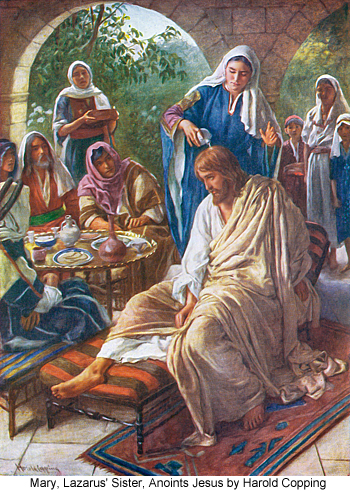 172:1.7 It was because of this rebuke, which he took as a personal reproof, that Judas Iscariot finally made up his mind to seek revenge for his hurt feelings. Many times had he entertained such ideas subconsciously, but now he dared to think such wicked thoughts in his open and conscious mind. And many others encouraged him in this attitude since the cost of this ointment was a sum equal to the earnings of one man for one year — enough to provide bread for five thousand persons. But Mary loved Jesus; she had provided this precious ointment with which to embalm his body in death, for she believed his words when he forewarned them that he must die, and it was not to be denied her if she changed her mind and chose to bestow this offering upon the Master while he yet lived.

John 12:2-9 Six days before the Passover, Jesus came to Bethany, where Laz'arus was, whom Jesus had raised from the dead. There they made him a supper; Martha served, and Laz'arus was one of those at table with him.

3 Mary took a pound of costly ointment of pure nard and anointed the feet of Jesus and wiped his feet with her hair; and the house was filled with the fragrance of the ointment.

But Judas Iscariot, one of his disciples (he who was to betray him), said, "Why was this ointment not sold for three hundred denarii and given to the poor?" This he said, not that he cared for the poor but because he was a thief, and as he had the money box he used to take what was put into it. Jesus said, "Let her alone, let her keep it for the day of my burial. The poor you always have with you, but you do not always have me."