The Caravan Trip To The Caspian 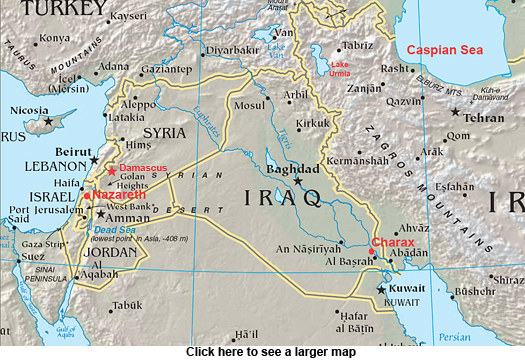 134:1.3 During his stay of a few weeks at Nazareth, Jesus visited with his family and friends, spent some time at the repair shop with his brother Joseph, but devoted most of his attention to Mary and Ruth. Ruth was then nearly fifteen years old, and this was Jesus' first opportunity to have long talks with her since she had become a young woman.

134:1.5 Jesus visited with the individual members of his family quite normally and naturally, but when they were all together, he had so little to say that they remarked about it among themselves. Mary especially was disconcerted by this unusually peculiar behavior of her first-born son.

134:1.6 About the time Jesus was preparing to leave Nazareth, the conductor of a large caravan which was passing through the city was taken violently ill, and Jesus, being a linguist, volunteered to take his place. Since this trip would necessitate his absence for a year, and inasmuch as all his brothers were married and his mother was living at home with Ruth, Jesus called a family conference at which he proposed that his mother and Ruth go to Capernaum to live in the home which he had so recently given to James. Accordingly, a few days after Jesus left with the caravan, Mary and Ruth moved to Capernaum, where they lived for the rest of Mary's life in the home that Jesus had provided. Joseph and his family moved into the old Nazareth home.

134:2.1 It was the first of April, A.D. 24, when Jesus left Nazareth on the caravan trip to the Caspian Sea region. The caravan which Jesus joined as its conductor was going from Jerusalem by way of Damascus and Lake Urmia through Assyria, Media, and Parthia to the southeastern Caspian Sea region. It was a full year before he returned from this journey.

134:2.2 For Jesus this caravan trip was another adventure of exploration and personal ministry. He had an interesting experience with his caravan family—passengers, guards, and camel drivers. Scores of men, women, and children residing along the route followed by the caravan lived richer lives as a result of their contact with Jesus, to them, the extraordinary conductor of a commonplace caravan. Not all who enjoyed these occasions of his personal ministry profited thereby, but the vast majority of those who met and talked with him were made better for the remainder of their natural lives.

134:2.3 Of all his world travels this Caspian Sea trip carried Jesus nearest to the Orient and enabled him to gain a better understanding of the Far-Eastern peoples. He made intimate and personal contact with every one of the surviving races of Urantia excepting the red. He equally enjoyed his personal ministry to each of these varied races and blended peoples, and all of them were receptive to the living truth which he brought them. The Europeans from the Far West and the Asiatics from the Far East alike gave attention to his words of hope and eternal life and were equally influenced by the life of loving service and spiritual ministry which he so graciously lived among them.

134:2.4 The caravan trip was successful in every way. This was a most interesting episode in the human life of Jesus, for he functioned during this year in an executive capacity, being responsible for the material intrusted to his charge and for the safe conduct of the travelers making up the caravan party. And he most faithfully, efficiently, and wisely discharged his multiple duties.

134:2.5 On the return from the Caspian region, Jesus gave up the direction of the caravan at Lake Urmia, where he tarried for slightly over two weeks. He returned as a passenger with a later caravan to Damascus, where the owners of the camels besought him to remain in their service. Declining this offer, he journeyed on with the caravan train to Capernaum, arriving the first of April, A.D. 25. No longer did he regard Nazareth as his home. Capernaum had become the home of Jesus, James, Mary, and Ruth. But Jesus never again lived with his family; when in Capernaum he made his home with the Zebedees.