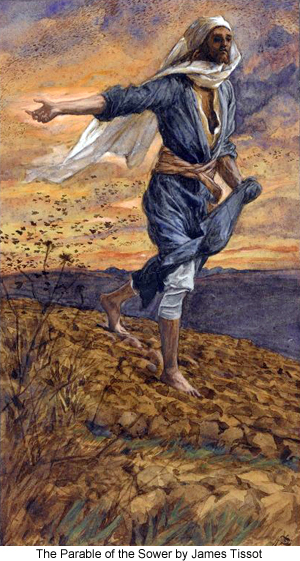 "A sower went forth to sow, and it came to pass as he sowed that some seed fell by the wayside to be trodden underfoot and devoured by the birds of heaven. Other seed fell upon the rocky places where there was little earth, and immediately it sprang up because there was no depth to the soil, but as soon as the sun shone, it withered because it had no root whereby to secure moisture. Other seed fell among the thorns, and as the thorns grew up, it was choked so that it yielded no grain. Still other seed fell upon good ground and, growing, yielded, some thirtyfold, some sixtyfold, and some a hundredfold." And when he had finished speaking this parable, he said to the multitude, "He who has ears to hear, let him hear." (151:1.2)

"Now will I tell you the last of the parable of the sower. I would test you to know how you will receive this: The kingdom of heaven is also like a man who cast good seed upon the earth; and while he slept by night and went about his business by day, the seed sprang up and grew, and although he knew not how it came about, the plant came to fruit. First there was the blade, then the ear, then the full grain in the ear. And then when the grain was ripe, he put forth the sickle, and the harvest was finished. He who has an ear to hear, let him hear." (151:3.15)

"The kingdom of heaven is like a man who sowed good seed in his field; but while he slept, his enemy came and sowed weeds among the wheat and hastened away. And so when the young blades sprang up and later were about to bring forth fruit, there appeared also the weeds. Then the servants of this householder came and said to him: `Sir, did you not sow good seed in your field? Whence then come these weeds?' And he replied to his servants, `An enemy has done this.' The servants then asked their master, `Would you have us go out and pluck up these weeds?' But he answered them and said: `No, lest while you are gathering them up, you uproot the wheat also. Rather let them both grow together until the time of the harvest, when I will say to the reapers, Gather up first the weeds and bind them in bundles to burn and then gather up the wheat to be stored in my barn.'" (151:4.1)