Parable Of The Talents

"As individuals, and as a generation of believers, hear me while I speak a parable: There was a certain great man who, before starting out on a long journey to another country, called all his trusted servants before him and delivered into their hands all his goods. To one he gave five talents, to another two, and to another one. And so on down through the entire group of honored stewards, to each he intrusted his goods according to their several abilities; and then he set out on his journey. When their lord had departed, his servants set themselves at work to gain profits from the wealth intrusted to them. Immediately he who had received five talents began to trade with them and very soon had made a profit of another five talents. In like manner he who had received two talents soon had gained two more. And so did all of these servants make gains for their master except him who received but one talent. 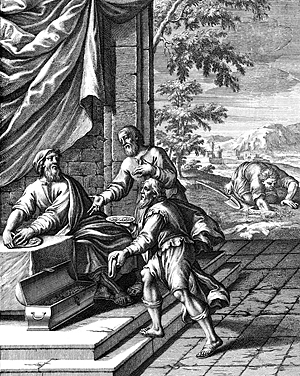 He went away by himself and dug a hole in the earth where he hid his lord's money. Presently the lord of those servants unexpectedly returned and called upon his stewards for a reckoning. And when they had all been called before their master, he who had received the five talents came forward with the money which had been intrusted to him and brought five additional talents, saying, `Lord, you gave me five talents to invest, and I am glad to present five other talents as my gain.' And then his lord said to him: `Well done, good and faithful servant, you have been faithful over a few things; I will now set you as steward over many; enter forthwith into the joy of your lord.' And then he who had received the two talents came forward, saying: `Lord, you delivered into my hands two talents; behold, I have gained these other two talents.' And his lord then said to him: `Well done, good and faithful steward; you also have been faithful over a few things, and I will now set you over many; enter you into the joy of your lord.' And then there came to the accounting he who had received the one talent. This servant came forward, saying, `Lord, I knew you and realized that you were a shrewd man in that you expected gains where you had not personally labored; therefore was I afraid to risk aught of that which was intrusted to me. I safely hid your talent in the earth; here it is; you now have what belongs to you.' But his lord answered: `You are an indolent and slothful steward. By your own words you confess that you knew I would require of you an accounting with reasonable profit, such as your diligent fellow servants have this day rendered. Knowing this, you ought, therefore, to have at least put my money into the hands of the bankers that on my return I might have received my own with interest.' And then to the chief steward this lord said: `Take away this one talent from this unprofitable servant and give it to him who has the ten talents.'

"To every one who has, more shall be given, and he shall have abundance; but from him who has not, even that which he has shall be taken away. You cannot stand still in the affairs of the eternal kingdom. My Father requires all his children to grow in grace and in a knowledge of the truth. You who know these truths must yield the increase of the fruits of the spirit and manifest a growing devotion to the unselfish service of your fellow servants. And remember that, inasmuch as you minister to one of the least of my brethren, you have done this service to me.

"And so should you go about the work of the Father's business, now and henceforth, even forevermore. Carry on until I come. In faithfulness do that which is intrusted to you, and thereby shall you be ready for the reckoning call of death. And having thus lived for the glory of the Father and the satisfaction of the Son, you shall enter with joy and exceedingly great pleasure into the eternal service of the everlasting kingdom." (176:3.4)