Home Jesus The Women Who Followed Jesus Mary, Mother Of Jesus Mary At The Crucifixion

Mary At The Crucifixion 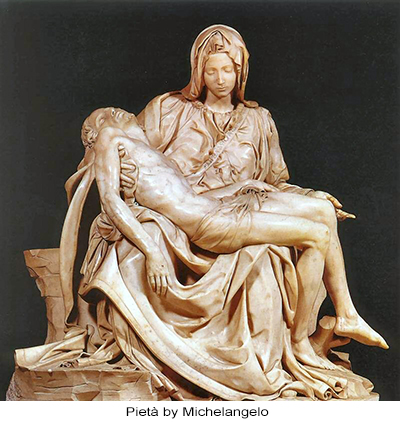 (186:0.2) Several times during the morning, messengers had brought news to Martha and Mary concerning the progress of Jesus' trial. But the family of Jesus did not reach Bethany until just a few minutes before John arrived bearing the request of Jesus to see his mother before he was put to death. After John Zebedee had told them all that had happened since the midnight arrest of Jesus, Mary his mother went at once in the company of John to see her eldest son. By the time Mary and John reached the city, Jesus, accompanied by the Roman soldiers who were to crucify him, had already arrived at Golgotha.

(187:2.7) The Apostle John, with Mary the mother of Jesus, Ruth, and Jude, arrived on the scene just after Jesus had been hoisted to his position on the cross, and just as the captain was nailing the title above the Master's head. John was the only one of the eleven apostles to witness the crucifixion, and even he was not present all of the time since he ran into Jerusalem to bring back his mother and her friends soon after he had brought Jesus' mother to the scene.

(187:4.7) Just after the repentant thief heard the Master's promise that they should sometime meet in Paradise, John returned from the city, bringing with him his mother and a company of almost a dozen women believers. John took up his position near Mary the mother of Jesus, supporting her. Her son Jude stood on the other side. As Jesus looked down upon this scene, it was noontide, and he said to his mother, "Woman, behold your son!" And speaking to John, he said, "My son, behold your mother!" And then he addressed them both, saying, "I desire that you depart from this place." And so John and Jude led Mary away from Golgotha. John took the mother of Jesus to the place where he tarried in Jerusalem and then hastened back to the scene of the crucifixion. After the Passover Mary returned to Bethsaida, where she lived at John's home for the rest of her natural life. Mary did not live quite one year after the death of Jesus.

(193:6.1) Acting upon the instruction of Peter, John Mark and others went forth to call the leading disciples together at the home of Mary Mark. By ten thirty, one hundred and twenty of the foremost disciples of Jesus living in Jerusalem had forgathered to hear the report of the farewell message of the Master and to learn of his ascension. Among this company was Mary the mother of Jesus. She had returned to Jerusalem with John Zebedee when the apostles came back from their recent sojourn in Galilee. Soon after Pentecost she returned to the home of Salome at Bethsaida. James the brother of Jesus was also present at this meeting, the first conference of the Master's disciples to be called after the termination of his planetary career.