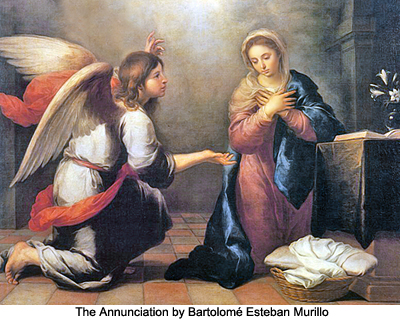 (122:2.6) Gabriel appeared to Mary about the middle of November, 8 B.C. , while she was at work in her Nazareth home. Later on, after Mary knew without doubt that she was to become a mother, she persuaded Joseph to let her journey to the City of Judah, four miles west of Jerusalem, in the hills, to visit Elizabeth. Gabriel had informed each of these mothers-to-be of his appearance to the other. Naturally they were anxious to get together, compare experiences, and talk over the probable futures of their sons. Mary remained with her distant cousin for three weeks. Elizabeth did much to strengthen Mary's faith in the vision of Gabriel, so that she returned home more fully dedicated to the call to mother the child of destiny whom she was so soon to present to the world as a helpless babe, an average and normal infant of the realm.

(122:3.1) One evening about sundown , before Joseph had returned home, Gabriel appeared to Mary …and, after she had recovered her composure, said: "I come at the bidding of one who is my Master and whom you shall love and nurture. To you, Mary, I bring glad tidings when I announce that the conception within you is ordained by heaven, and that in due time you will become the mother of a son; you shall call him Joshua, and he shall inaugurate the kingdom of heaven on earth and among men. Speak not of this matter save to Joseph and to Elizabeth, your kinswoman, to whom I have also appeared, and who shall presently also bear a son, whose name shall be John, and who will prepare the way for the message of deliverance which your son shall proclaim to men with great power and deep conviction. And doubt not my word, Mary, for this home has been chosen as the mortal habitat of the child of destiny. My benediction rests upon you, the power of the Most Highs will strengthen you, and the Lord of all the earth shall overshadow you."

Mary pondered this [Gabriel] visitation secretly in her heart for many weeks until of a certainty she knew she was with child , before she dared to disclose these unusual events to her husband. When Joseph heard all about this, although he had great confidence in Mary, he was much troubled and could not sleep for many nights. At first Joseph had doubts about the Gabriel visitation. Then when he became well-nigh persuaded that Mary had really heard the voice and beheld the form of the divine messenger, he was torn in mind as he pondered how such things could be. How could the offspring of human beings be a child of divine destiny? Never could Joseph reconcile these conflicting ideas until, after several weeks of thought, both [Joseph] and Mary reached the conclusion that they had been chosen to become the parents of the Messiah, though it had hardly been the Jewish concept that the expected deliverer was to be of divine nature. Upon arriving at this momentous conclusion, Mary hastened to depart for a visit with Elizabeth.

Upon her return, Mary went to visit her parents, Joachim and Hannah. Her two brothers and two sisters, as well as her parents, were always very skeptical about the divine mission of Jesus, though, of course, at this time they knew nothing of the Gabriel visitation. But Mary did confide to her sister Salome that she thought her son was destined to become a great teacher.

Gabriel's announcement to Mary was made the day following the conception of Jesus and was the only event of supernatural occurrence connected with her entire experience of carrying and bearing the child of promise.