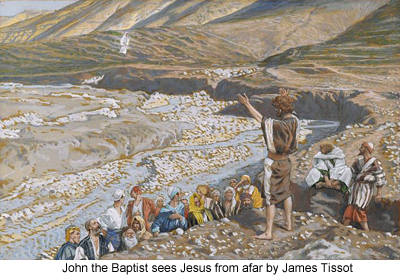 When John returned to his disciples (he now had some twenty-five or thirty who abode with him constantly), he found them in earnest conference, discussing what had just happened in connection with Jesus' baptism. They were all the more astonished when John now made known to them the story of the Gabriel visitation to Mary before Jesus was born, and also that Jesus spoke no word to him even after he had told him about this. There was no rain that evening, and this group of thirty or more talked long into the starlit night. They wondered where Jesus had gone, and when they would see him again.

After the experience of this day the preaching of John took on new and certain notes of proclamation concerning the coming kingdom and the expected Messiah. It was a tense time, these forty days of tarrying, waiting for the return of Jesus. But John continued to preach with great power, and his disciples began at about this time to preach to the overflowing throngs which gathered around John at the Jordan.

In the course of these forty days of waiting, many rumors spread about the countryside and even to Tiberias and Jerusalem.Thousands came over to see the new attraction in John's camp, the reputed Messiah, but Jesus was not to be seen. When the disciples of John asserted that the strange man of God had gone to the hills, many doubted the entire story.

About three weeks after Jesus had left them, there arrived on the scene at Pella a new deputation from the priests and Pharisees at Jerusalem. They asked John directly if he was Elijah or the prophet that Moses promised; and when John said, "I am not," they made bold to ask, "Are you the Messiah?" and John answered, "I am not." Then said these men from Jerusalem: "If you are not Elijah, nor the prophet, nor the Messiah, then why do you baptize the people and create all this stir?" And John replied: "It should be for those who have heard me and received my baptism to say who I am, but I declare to you that, while I baptize with water, there has been among us one who will return to baptize you with the Holy Spirit."

These forty days were a difficult period for John and his disciples. What was to be the relation of John to Jesus? A hundred questions came up for discussion. Politics and selfish preferment began to make their appearance. Intense discussions grew up around the various ideas and concepts of the Messiah. Would he become a military leader and a Davidic king? Would he smite the Roman armies as Joshua had the Canaanites? Or would he come to establish a spiritual kingdom? John rather decided, with the minority, that Jesus had come to establish the kingdom of heaven, although he was not altogether clear in his own mind as to just what was to be embraced within this mission of the establishment of the kingdom of heaven.

These were strenuous days in John's experience, and he prayed for the return of Jesus. Some of John's disciples organized scouting parties to go in search of Jesus, but John forbade, saying: "Our times are in the hands of the God of heaven; he will direct his chosen Son."

It was early on the morning of Sabbath, February 23, that the company of John, engaged in eating their morning meal, looked up toward the north and beheld Jesus coming to them. As he approached them, John stood upon a large rock and, lifting up his sonorous voice, said: "Behold the Son of God, the deliverer of the world! This is he of whom I have said, `After me there will come one who is preferred before me because he was before me.' For this cause came I out of the wilderness to preach repentance and to baptize with water, proclaiming that the kingdom of heaven is at hand. And now comes one who shall baptize you with the Holy Spirit. And I beheld the divine spirit descending upon this man, and I heard the voice of God declare, `This is my beloved Son in whom I am well pleased.'"

Jesus bade them return to their food while he sat down to eat with John, his brothers James and Jude having returned to Capernaum.

Early in the morning of the next day he took leave of John and his disciples, going back to Galilee. He gave them no word as to when they would again see him. To John's inquiries about his own preaching and mission Jesus only said, "My Father will guide you now and in the future as he has in the past." And these two great men separated that morning on the banks of the Jordan,never again to greet each other in the flesh. ~ The Urantia Book, (135:9.1)