John the Baptist In Prison 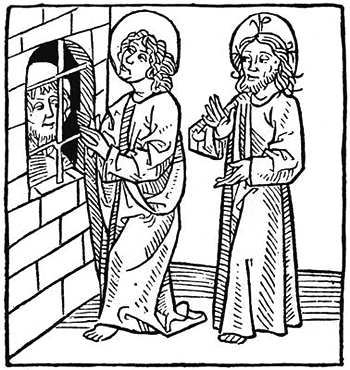 John had a lonely and somewhat bitter experience in prison. Few of his followers were permitted to see him. He longed to see Jesus but had to be content with hearing of his work through those of his followers who had become believers in the Son of Man. He was often tempted to doubt Jesus and his divine mission. If Jesus were the Messiah, why did he do nothing to deliver him from this unbearable imprisonment? For more than a year and a half this rugged man of God's outdoors languished in that despicable prison. And this experience was a great test of his faith in, and loyalty to, Jesus. Indeed, this whole experience was a great test of John's faith even in God. Many times was he tempted to doubt even the genuineness of his own mission and experience.

After he had been in prison several months, a group of his disciples came to him and, after reporting concerning the public activities of Jesus, said: "So you see, Teacher, that he who was with you at the upper Jordan prospers and receives all who come to him. He even feasts with publicans and sinners. You bore courageous witness to him, and yet he does nothing to effect your deliverance." But John answered his friends: "This man can do nothing unless it has been given him by his Father in heaven. You well remember that I said, `I am not the Messiah, but I am one sent on before to prepare the way for him.' And that I did. He who has the bride is the bridegroom, but the friend of the bridegroom who stands near by and hears him rejoices greatly because of the bridegroom's voice. This, my joy, therefore is fulfilled. He must increase but I must decrease. I am of this earth and have declared my message. Jesus of Nazareth comes down to the earth from heaven and is above us all. The Son of Man has descended from God, and the words of God he will declare to you. For the Father in heaven gives not the spirit by measure to his own Son. The Father loves his Son and will presently put all things in the hands of this Son. He who believes in the Son has eternal life. And these words which I speak are true and abiding."

These disciples were amazed at John's pronouncement, so much so that they departed in silence. John was also much agitated, for he perceived that he had uttered a prophecy. Never again did he wholly doubt the mission and divinity of Jesus. But it was a sore disappointment to John that Jesus sent him no word, that he came not to see him, and that he exercised none of his great power to deliver him from prison. But Jesus knew all about this. He had great love for John, but being now cognizant of his divine nature and knowing fully the great things in preparation for John when he departed from this world and also knowing that John's work on earth was finished, he constrained himself not to interfere in the natural outworking of the great preacher-prophet's career. ~ The Urantia Book, (135:11.1)