Jesus' Presentation In The Temple 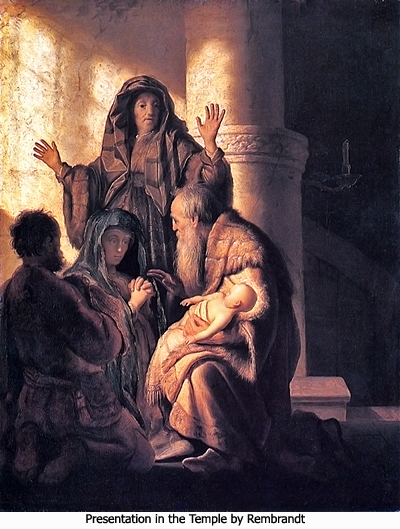 122:9.1 Moses had taught the Jews that every first-born son belonged to the Lord, and that, in lieu of his sacrifice as was the custom among the heathen nations, such a son might live provided his parents would redeem him by the payment of five shekels to any authorized priest. There was also a Mosaic ordinance which directed that a mother, after the passing of a certain period of time, should present herself (or have someone make the proper sacrifice for her) at the temple for purification. It was customary to perform both of these ceremonies at the same time. Accordingly, Joseph and Mary went up to the temple at Jerusalem in person to present Jesus to the priests and effect his redemption and also to make the proper sacrifice to insure Mary's ceremonial purification from the alleged uncleanness of childbirth.

122:9.2 There lingered constantly about the courts of the temple two remarkable characters, Simeon a singer and Anna a poetess. Simeon was a Judean, but Anna was a Galilean. This couple were frequently in each other's company, and both were intimates of the priest Zacharias, who had confided the secret of John and Jesus to them. Both Simeon and Anna longed for the coming of the Messiah, and their confidence in Zacharias led them to believe that Jesus was the expected deliverer of the Jewish people.

122:9.3 Zacharias knew the day Joseph and Mary were expected to appear at the temple with Jesus, and he had prearranged with Simeon and Anna to indicate, by the salute of his upraised hand, which one in the procession of first-born children was Jesus.

122:9.4 For this occasion Anna had written a poem which Simeon proceeded to sing, much to the astonishment of Joseph, Mary, and all who were assembled in the temple courts. And this was their hymn of the redemption of the first-born son: 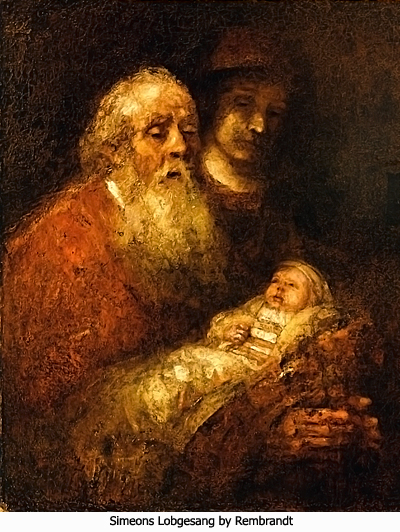 122:9.5 Blessed be the Lord, the God of Israel,
For he has visited us and wrought redemption for his people;
He has raised up a horn of salvation for all of us

In the house of his servant David.
Even as he spoke by the mouth of his holy prophets—
Salvation from our enemies and from the hand of all who hate us;
To show mercy to our fathers, and remember his holy covenant—
The oath which he swore to Abraham our father,
To grant us that we, being delivered out of the hand of our enemies,
Should serve him without fear,

In holiness and righteousness before him all our days.
Yes, and you, child of promise, shall be called the prophet of the Most High; br>
For you shall go before the face of the Lord to establish his kingdom;
To give knowledge of salvation to his people
In the remission of their sins.
Rejoice in the tender mercy of our God because the dayspring from on high has now visited us
To shine upon those who sit in darkness and the shadow of death;
To guide our feet into ways of peace.
And now let your servant depart in peace, O Lord, according to your word,
For my eyes have seen your salvation,
Which you have prepared before the face of all peoples;
A light for even the unveiling of the gentiles
And the glory of your people Israel.

122:9.28 On the way back to Bethlehem, Joseph and Mary were silent—confused and overawed. Mary was much disturbed by the farewell salutation of Anna, the aged poetess, and Joseph was not in harmony with this premature effort to make Jesus out to be the expected Messiah of the Jewish people.