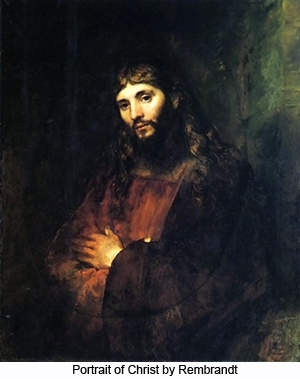 128:1.1 With the attainment of adult years Jesus began in earnest and with full self-consciousness the task of completing the experience of mastering the knowledge of the life of his lowest form of intelligent creatures, thereby finally and fully earning the right of unqualified rulership of his self-created universe. He entered upon this stupendous task fully realizing his dual nature. But he had already effectively combined these two natures into one—Jesus of Nazareth.

128:1.2 Joshua ben Joseph knew full well that he was a man, a mortal man, born of woman. This is shown in the selection of his first title, the Son of Man. He was truly a partaker of flesh and blood, and even now, as he presides in sovereign authority over the destinies of a universe, he still bears among his numerous well-earned titles that of Son of Man. It is literally true that the creative Word—the Creator Son—of the Universal Father was "made flesh and dwelt as a man of the realm on Urantia." He labored, grew weary, rested, and slept. He hungered and satisfied such cravings with food; he thirsted and quenched his thirst with water. He experienced the full gamut of human feelings and emotions; he was "in all things tested, even as you are," and he suffered and died.

128:1.3 He obtained knowledge, gained experience, and combined these into wisdom, just as do other mortals of the realm. Until after his baptism he availed himself of no supernatural power. He employed no agency not a part of his human endowment as a son of Joseph and Mary.

128:1.4 As to the attributes of his prehuman existence, he emptied himself. Prior to the beginning of his public work his knowledge of men and events was wholly self-limited. He was a true man among men.

128:1.5 It is forever and gloriously true: "We have a high ruler who can be touched with the feeling of our infirmities. We have a Sovereign who was in all points tested and tempted like as we are, yet without sin." And since he himself has suffered, being tested and tried, he is abundantly able to understand and minister to those who are confused and distressed.

128:1.6 The Nazareth carpenter now fully understood the work before him, but he chose to live his human life in the channel of its natural flowing. And in some of these matters he is indeed an example to his mortal creatures, even as it is recorded: "Let this mind be in you which was also in Christ Jesus, who, being of the nature of God, thought it not strange to be equal with God. But he made himself to be of little import and, taking upon himself the form of a creature, was born in the likeness of mankind. And being thus fashioned as a man, he humbled himself and became obedient to death, even the death of the cross."

128:1.7 He lived his mortal life just as all others of the human family may live theirs, "who in the days of the flesh so frequently offered up prayers and supplications, even with strong feelings and tears, to him who is able to save from all evil, and his prayers were effective because he believed." Wherefore it behooved him in every respect to be made like his brethren that he might become a merciful and understanding sovereign ruler over them.

128:1.8 Of his human nature he was never in doubt; it was self-evident and always present in his consciousness. But of his divine nature there was always room for doubt and conjecture, at least this was true right up to the event of his baptism. The self-realization of divinity was a slow and, from the human standpoint, a natural evolutionary revelation. This revelation and self-realization of divinity began in Jerusalem when he was not quite thirteen years old with the first supernatural occurrence of his human existence; and this experience of effecting the self-realization of his divine nature was completed at the time of his second supernatural experience while in the flesh, the episode attendant upon his baptism by John in the Jordan, which event marked the beginning of his public career of ministry and teaching.

128:1.9 Between these two celestial visitations, one in his thirteenth year and the other at his baptism, there occurred nothing supernatural or superhuman in the life of this incarnated Creator Son. Notwithstanding this, the babe of Bethlehem, the lad, youth, and man of Nazareth, was in reality the incarnated Creator of a universe; but he never once used aught of this power, nor did he utilize the guidance of celestial personalities, aside from that of his guardian seraphim, in the living of his human life up to the day of his baptism by John. And we who thus testify know whereof we speak.

128:1.10 And yet, throughout all these years of his life in the flesh he was truly divine. He was actually a Creator Son of the Paradise Father. When once he had espoused his public career, subsequent to the technical completion of his purely mortal experience of sovereignty acquirement, he did not hesitate publicly to admit that he was the Son of God. He did not hesitate to declare, "I am Alpha and Omega, the beginning and the end, the first and the last." He made no protest in later years when he was called Lord of Glory, Ruler of a Universe, the Lord God of all creation, the Holy One of Israel, the Lord of all, our Lord and our God, God with us, having a name above every name and on all worlds, the Omnipotence of a universe, the Universe Mind of this creation, the One in whom are hid all treasures of wisdom and knowledge, the fullness of Him who fills all things, the eternal Word of the eternal God, the One who was before all things and in whom all things consist, the Creator of the heavens and the earth, the Upholder of a universe, the Judge of all the earth, the Giver of life eternal, the True Shepherd, the Deliverer of the worlds, and the Captain of our salvation.

128:1.11 He never objected to any of these titles as they were applied to him subsequent to the emergence from his purely human life into the later years of his self-consciousness of the ministry of divinity in humanity, and for humanity, and to humanity on this world and for all other worlds. Jesus objected to but one title as applied to him: When he was once called Immanuel, he merely replied, "Not I, that is my elder brother."

128:1.12 Always, even after his emergence into the larger life on earth, Jesus was submissively subject to the will of the Father in heaven.

128:1.13 After his baptism he thought nothing of permitting his sincere believers and grateful followers to worship him. Even while he wrestled with poverty and toiled with his hands to provide the necessities of life for his family, his awareness that he was a Son of God was growing; he knew that he was the maker of the heavens and this very earth whereon he was now living out his human existence. And the hosts of celestial beings throughout the great and onlooking universe likewise knew that this man of Nazareth was their beloved Sovereign and Creator-father. A profound suspense pervaded the universe of Nebadon throughout these years; all celestial eyes were continuously focused on Urantia—on Palestine.