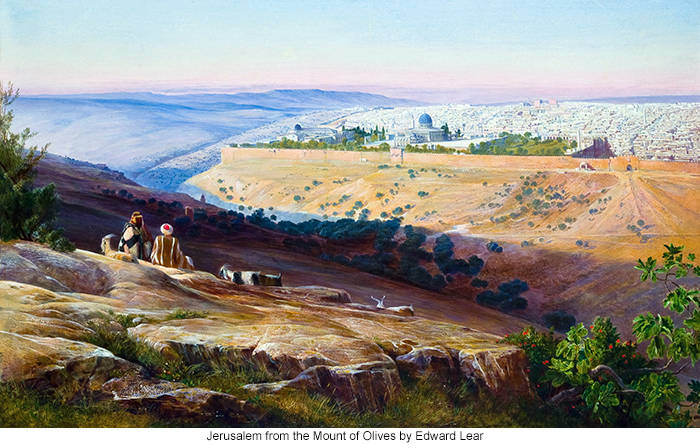 177:3.1 The apostles spent most of this day walking about on Mount Olivet and visiting with the disciples who were encamped with them, but early in the afternoon they became very desirous of seeing Jesus return. As the day wore on, they grew increasingly anxious about his safety; they felt inexpressibly lonely without him. There was much debating throughout the day as to whether the Master should have been allowed to go off by himself in the hills, accompanied only by an errand boy. Though no man openly so expressed his thoughts, there was not one of them, save Judas Iscariot who did not wish himself in John Mark's place.

177:3.2 It was about midafternoon when Nathaniel made his speech on "Supreme Desire" to about half a dozen of the apostles and as many disciples, the ending of which was: "What is wrong with most of us is that we are only halfhearted. We fail to love the Master as he loves us. If we had all wanted to go with him as much as John Mark did, he would surely have taken us all. We stood by while the lad approached the Master and offered him the basket, but when the Master took hold of it, the lad would not let go. And so the Master left us here while he went off to the hills with basket, boy, and all."

177:3.3 About four o'clock, runners came to David Zebedee bringing him word from his mother at Bethsaida and from Jesus' mother. Several days previously David had made up his mind that the chief priests and rulers were going to kill Jesus. David knew they were determined to destroy the Master, and he was about convinced that Jesus would neither exert his divine power to save himself nor permit his followers to employ force in his defense. Having reached these conclusions, he lost no time in dispatching a messenger to his mother, urging her to come at once to Jerusalem and to bring Mary the mother of Jesus and every member of his family.

177:3.4 David's mother did as her son requested, and now the runners came back to David bringing the word that his mother and Jesus' entire family were on the way to Jerusalem and should arrive sometime late on the following day or very early the next morning. Since David did this on his own initiative, he thought it wise to keep the matter to himself. He told no one, therefore, that Jesus' family was on the way to Jerusalem.

177:3.5 Shortly after noon, more than twenty of the Greeks who had met with Jesus and the twelve at the home of Joseph of Arimathea arrived at the camp, and Peter and John spent several hours in conference with them. These Greeks, at least some of them, were well advanced in the knowledge of the kingdom, having been instructed by Rodan at Alexandria.

177:3.6 That evening, after returning to the camp, Jesus visited with the Greeks, and had it not been that such a course would have greatly disturbed his apostles and many of his leading disciples, he would have ordained these twenty Greeks, even as he had the seventy.

177:3.7 While all of this was going on at the camp, in Jerusalem the chief priests and elders were amazed that Jesus did not return to address the multitudes. True, the day before, when he left the temple, he had said, "I leave your house to you desolate." But they could not understand why he would be willing to forgo the great advantage which he had built up in the friendly attitude of the crowds. While they feared he would stir up a tumult among the people, the Master's last words to the multitude had been an exhortation to conform in every reasonable manner with the authority of those "who sit in Moses' seat." But it was a busy day in the city as they simultaneously prepared for the Passover and perfected their plans for destroying Jesus.

177:3.8 Not many people came to the camp, for its establishment had been kept a well-guarded secret by all who knew that Jesus was expecting to stay there in place of going out to Bethany every night.