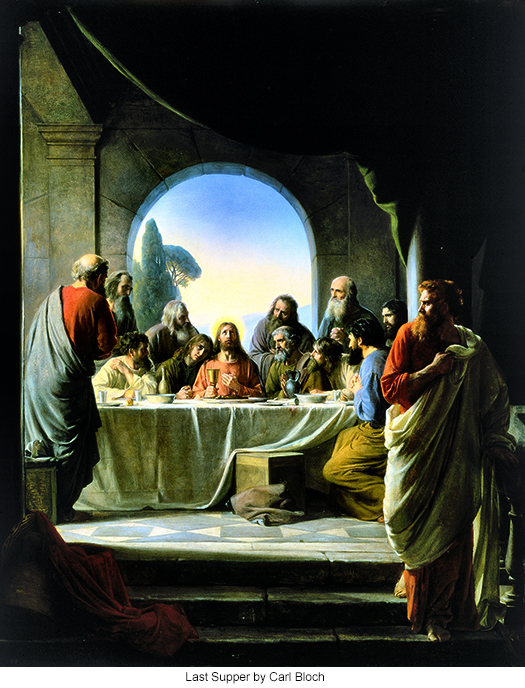 179:1.4 They expected the Master to arrive any moment, but they were in a quandary as to whether they should seat themselves or await his coming and depend on him to assign them their places. While they hesitated, Judas stepped over to the seat of honor, at the left of the host, and signified that he intended there to recline as the preferred guest. This act of Judas immediately stirred up a heated dispute among the other apostles.

179:3.1 As the Master knelt [to wash the feet of the Apostles], all twelve arose as one man to their feet; even the traitorous Judas so far forgot his infamy for a moment as to arise with his fellow apostles in this expression of surprise, respect, and utter amazement.

179:3.4 The dramatic appeal of this unusual scene at first touched the heart of even Judas Iscariot; but when his vainglorious intellect passed judgment upon the spectacle, he concluded that this gesture of humility was just one more episode which conclusively proved that Jesus would never qualify as Israel's deliverer, and that he had made no mistake in the decision to desert the Master's cause.

179:4.1 After some time had elapsed, in about the middle of this second course of the meal, Jesus, looking them over, said: "I have told you how much I desired to have this supper with you, and knowing how the evil forces of darkness have conspired to bring about the death of the Son of Man, I determined to eat this supper with you in this secret chamber and a day in advance of the Passover since I will not be with you by this time tomorrow night. I have repeatedly told you that I must return to the Father. Now has my hour come, but it was not required that one of you should betray me into the hands of my enemies."

179:4.3 And when Jesus had thus spoken, they all began again to ask, "Is it I?" And as Judas, sitting on the left of his Master, again asked, "Is it I?" Jesus, dipping the bread in the dish of herbs, handed it to Judas, saying, "You have said." But the others did not hear Jesus speak to Judas. John, who reclined on Jesus' right hand, leaned over and asked the Master: "Who is it? We should know who it is that has proved untrue to his trust." Jesus answered: "Already have I told you, even he to whom I gave the sop." But it was so natural for the host to give a sop to the one who sat next to him on the left that none of them took notice of this, even though the Master had so plainly spoken. But Judas was painfully conscious of the meaning of the Master's words associated with his act, and he became fearful lest his brethren were likewise now aware that he was the betrayer.

179:4.6 When Jesus had thus spoken, leaning over toward Judas, he said: "What you have decided to do, do quickly." And when Judas heard these words, he arose from the table and hastily left the room, going out into the night to do what he had set his mind to accomplish. When the other apostles saw Judas hasten off after Jesus had spoken to him, they thought he had gone to procure something additional for the supper or to do some other errand for the Master since they supposed he still carried the bag.
BackHomeNext
Scroll to top