After The Supper, The Master Pauses In Sadness - The Eleven Realize The Truth 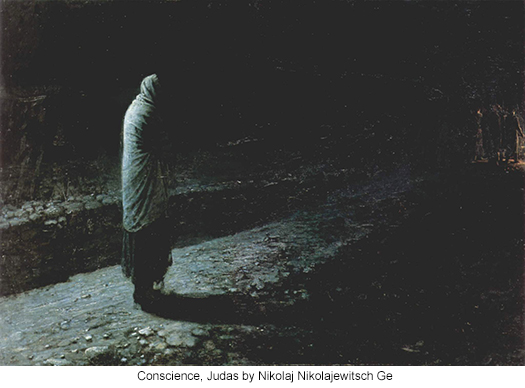 181:2.6 And then the Master, passing around his own seat, paused a moment by the side of the place of Judas Iscariot. The apostles were rather surprised that Judas had not returned before this, and they were very curious to know the significance of Jesus' sad countenance as he stood by the betrayer's vacant seat. But none of them, except possibly Andrew, entertained even the slightest thought that their treasurer had gone out to betray his Master, as Jesus had intimated to them earlier in the evening and during the supper. So much had been going on that, for the time being, they had quite forgotten about the Master's announcement that one of them would betray him.

182:2.4 Resentment of Judas's being a traitor for the moment eclipsed everything else in the apostles' minds. The Master's comment in reference to Judas, spoken in the course of the last prayer,opened their eyes to the fact that he had forsaken them.

183:0.3 ...the Master...walked down toward the olive press near the entrance to Gethsemane Park. Although the three apostles, the Greek, and the other members of the camp hesitated immediately to follow him, John Mark hastened around through the olive trees and secreted himself in a small shed near the olive press. Jesus withdrew from the camp and from his friends in order that his apprehenders, when they arrived, might arrest him without disturbing his apostles. The Master feared to have his apostles awake and present at the time of his arrest lest the spectacle of Judas's betraying him should so arouse their animosity that they would offer resistance to the soldiers and would be taken into custody with him. He feared that, if they should be arrested with him, they might also perish with him.