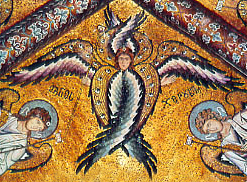 The Most Highs rule in the kingdoms of men through many celestial forces and agencies but chiefly through the ministry of seraphim.

Since the times of Michael's bestowal on your world the general management of Urantia has been intrusted to a special group on Jerusem of twenty-four onetime Urantians... By nature they were all real leaders when they functioned on Urantia, and (excepting Machiventa Melchizedek these qualities of leadership have been further augmented by mansion world experience and supplemented by the training of Jerusem citizenship. ~ The Urantia Book, (114:2.1)

Every one hundred years of Urantia time, the Jerusem corps of twenty-four planetary supervisors designate one of their number to sojourn on your world to act as their executive representative, as resident governor general. ~ The Urantia Book, (114:3.1)

There is still resident on Urantia a Vorondadek Son, an observer for the Most Highs of Edentia and, in the absence of direct action by Michael, trustee of planetary sovereignty. The present Most High observer (and sometime regent) is the twenty-third thus to serve on Urantia.

A Most High observer is empowered, at his discretion, to seize the planetary government in times of grave planetary crises, and it is of record that this has happened thirty-three times in the history of Urantia. ~ The Urantia Book, (114:4.1)

Each administrative day on Urantia begins with a consultative conference, which is attended by the governor general, the planetary chief of archangels, the Most High observer, the supervising supernaphim, the chief of resident Life Carriers, and invited guests from among the high Sons of the universe or from among certain of the student visitors who may chance to be sojourning on the planet.

The direct administrative cabinet of the governor general consists of twelve seraphim, the acting chiefs of the twelve groups of special angels functioning as the immediate superhuman directors of planetary progress and stability.

When the first governor general arrived on Urantia, concurrent with the outpouring of the Spirit of Truth he was accompanied by twelve corps of special seraphim, Seraphington graduates, who were immediately assigned to certain special planetary services. ~ The Urantia Book, (114:5.5)

The twelve corps of the master seraphim of planetary supervision are functional on Urantia as follows:

THE RESERVE CORPS OF DESTINY

The reserve corps of destiny consists of living men and women who have been admitted to the special service of the superhuman administration of world affairs.

Each division of planetary celestial service is entitled to a liaison corps of these mortals of destiny standing.

The reservists unconsciously act as conservators of essential planetary information. Many times, upon the death of a reservist, a transfer of certain vital data from the mind of the dying reservist to a younger successor is made by a liaison of the two Thought Adjusters.

Urantia mortals should not allow the comparative spiritual isolation of their world from certain of the local universe circuits to produce a feeling of cosmic desertion or planetary orphanage. There is operative on the planet a very definite and effective superhuman supervision of world affairs and human destinies. ~ The Urantia Book, (Please see all of Section 7)