Were Cain And Abel The Only Children Adam And Eve Had? 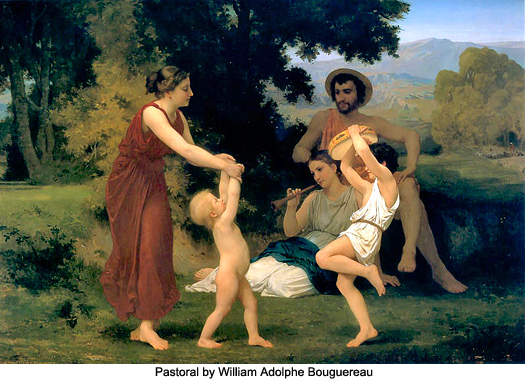 Adamson was Adam and Eve's firstborn. He was followed by his sister and Eveson, the second son of Adam and Eve. Eve bore sixty-three children, thirty-two daughters, and thirty-one sons, before the default. When Adam and Eve left the Garden, their family consisted of four generations numbering 1,647 pure-line descendants. They had forty-two children after leaving the Garden besides the two offspring of joint parentage with the mortal stock of Earth. (Click to read more 74:6.2)

On their home world, Jerusem, children of Adam and Eve are immortal, but the children of Adam and Eve born after their arrival on Earth are not immune to natural death. There occurs a change in the life-transmitting mechanism when these Sons are rematerialized for reproductive function on an evolutionary world. An Adam and Eve on a planetary mission can live on indefinitely if they do not default, but within certain limits their children experience decreasing longevity with each succeeding generation. (Click to read more 51:1.8)

Cain (Eve's son) and Sansa (Adam's daughter) were both born after Adam and Eve left the Garden of Eden and reached their destination between the rivers in Mesopotamia. Less than two years after Cain's birth, Abel was born, the first child of Adam and Eve to be born in the second garden. (Click to read more 76:0.2; 76:2.1) 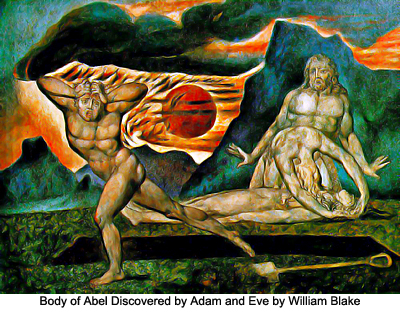 When Abel grew up to the age of twelve years, he elected to be a herder; Cain had chosen to follow agriculture.

Now, in those days, among the natives of that land, it was customary to make offerings to the priesthood of the things at hand. Herders would bring of their flocks, farmers of the fruits of the fields; and in accordance with this custom, Cain and Abel likewise made periodic offerings to the priests. The two boys had many times argued about the relative merits of their vocations, and Abel was not slow to note that preference was shown for his animal sacrifices. In vain did Cain appeal to the traditions of the first Eden, to the former preference for the fruits of the fields. But this Abel would not allow, and he taunted his older brother in his discomfiture.

In the days of the first Eden Adam had indeed sought to discourage the offering of animal sacrifice so that Cain had a justifiable precedent for his contentions. It was, however, difficult to organize the religious life of the second Eden. Adam was burdened with a thousand and one details associated with the work of building, defense, and agriculture. Being much depressed spiritually, he intrusted the organization of worship and education to those of Nodite extraction who had served in these capacities in the first garden; and in even so short a time the officiating Nodite priests were reverting to the standards and rulings of pre-Adamic times.

The two boys never got along well, and this matter of sacrifices further contributed to the growing hatred between them. Abel knew he was the son of both Adam and Eve and never failed to impress upon Cain that Adam was not his father. Cain was not of the pure violet race since his father was of pre-Adamic aboriginal stock. And all of this, with Cain's natural bellicose inheritance, caused him to nourish an ever-increasing hatred for his younger brother.

The boys were respectively eighteen and twenty years of age when the tension between them was finally resolved, one day, when Abel's taunts so infuriated his bellicose brother that Cain turned upon him in wrath and slew him.

The observation of Abel's conduct establishes the value of environment and education as factors in character development. Abel had an ideal inheritance, and heredity lies at the bottom of all character; but the influence of an inferior environment virtually neutralized this magnificent inheritance. Abel, especially during his younger years, was greatly influenced by his unfavorable surroundings. He would have become an entirely different person had he lived to be twenty-five or thirty; his superb inheritance would then have shown itself. While a good environment cannot contribute much toward really overcoming the character handicaps of a base heredity, a bad environment can very effectively spoil an excellent inheritance, at least during the younger years of life. Good social environment and proper education are indispensable soil and atmosphere for getting the most out of a good inheritance.

The death of Abel became known to his parents when his dogs brought the flocks home without their master. To Adam and Eve, Cain was fast becoming the grim reminder of their folly, and they encouraged him in his decision to leave the garden.

Cain's life in Mesopotamia had not been exactly happy since he was in such a peculiar way symbolic of the default. It was not that his associates were unkind to him, but he had not been unaware of their subconscious resentment of his presence. But Cain knew that, since he bore no tribal mark, he would be killed by the first neighboring tribesmen who might chance to meet him. Fear, and some remorse, led him to repent. Cain had never been indwelt by an Adjuster, had always been defiant of the family discipline and disdainful of his father's religion. But he now went to Eve, his mother, and asked for spiritual help and guidance, and when he honestly sought divine assistance, an Adjuster indwelt him. And this Adjuster, dwelling within and looking out, gave Cain a distinct advantage of superiority which classed him with the greatly feared tribe of Adam.

And so Cain departed for the land of Nod, east of the second Eden. He became a great leader among one group of his father's people and did, to a certain degree, fulfill the predictions of Serapatatia, for he did promote peace between this division of the Nodites and the Adamites throughout his lifetime. Cain married Remona, his distant cousin, and their first son, Enoch, became the head of the Elamite Nodites. And for hundreds of years the Elamites and the Adamites continued to be at peace. (Click to read more 76:2.0)