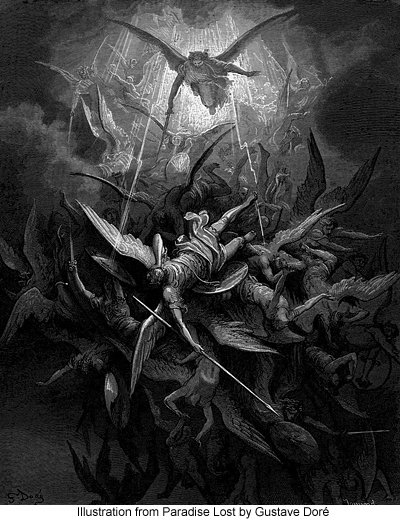 The following quotes from The Urantia Book highlight the "war in Heaven," which was very real, and very terrible. This spiritual warfare lasted for seven years, and resulted in the downfall of many formerly high spirit beings. This battle in Heaven was the direct result of the Lucifer Rebellion. For a complete accounting of this pivotal event in earth history, please click here.

"There was war in heaven ; Michael's commander and his angels fought against the dragon (Lucifer, Satan, and the apostate princes); and the dragon and his rebellious angels fought but prevailed not. " This "war in heaven" was not a physical battle as such a conflict might be conceived on Urantia. In the early days of the struggle Lucifer held forth continuously in the planetary amphitheater. Gabriel conducted an unceasing exposure of the rebel sophistries from his headquarters taken up near at hand. The various personalities present on the sphere who were in doubt as to their attitude would journey back and forth between these discussions until they arrived at a final decision.

But this war in heaven was very terrible and very real. While displaying none of the barbarities so characteristic of physical warfare on the immature worlds, this conflict was far more deadly; material life is in jeopardy in material combat, but the war in heaven was fought in terms of life eternal. ~ The Urantia Book, (53:5.6)

It was over two years of system time from the beginning of the "war in heaven" until the installation of Lucifer's successor. But at last the new Sovereign came, landing on the sea of glass with his staff. I was among the reserves mobilized on Edentia by Gabriel, and I well remember the first message of Lanaforge to the Constellation Father of Norlatiadek. It read: "Not a single Jerusem citizen was lost. Every ascendant mortal survived the fiery trial and emerged from the crucial test triumphant and altogether victorious. " And on to Salvington, Uversa, and Paradise went this message of assurance that the survival experience of mortal ascension is the greatest security against rebellion and the surest safeguard against sin. ~ The Urantia Book, (53:7.12)

The outbreak of rebellion on Jerusem, the capital of Satania, was broadcast by the Melchizedek council. The emergency Melchizedeks were immediately dispatched to Jerusem, and Gabriel volunteered to act as the representative of the Creator Son, whose authority had been challenged. With this broadcast of the fact of rebellion in Satania the system was isolated, quarantined, from her sister systems. There was "war in heaven," the headquarters of Satania, and it spread to every planet in the local system.

On Urantia forty members of the corporeal staff of one hundred (including Van) refused to join the insurrection. Many of the staff's human assistants (modified and otherwise) were also brave and noble defenders of Michael and his universe government. There was a terrible loss of personalities among seraphim and cherubim. Almost one half of the administrator and transition seraphim assigned to the planet joined their leader and Daligastia in support of the cause of Lucifer. Forty thousand one hundred and nineteen of the primary midway creatures joined hands with Caligastia, but the remainder of these beings remained true to their trust.

The traitorous Prince marshaled the disloyal midway creatures and other groups of rebel personalities and organized them to execute his bidding, while Van assembled the loyal midwayers and other faithful groups and began the great battle for the salvation of the planetary staff and other marooned celestial personalities.

Upon the outbreak of rebellion, loyal cherubim and seraphim, with the aid of three faithful midwayers, assumed the custody of the tree of life and permitted only the forty loyalists of the staff and their associated modified mortals to partake of the fruit and leaves of this energy plant. There were fifty-six of these modified Andonite associates of the staff, sixteen of the Andonite attendants of the disloyal staff refusing to go into rebellion with their masters.

Throughout the seven crucial years of the Caligastia rebellion, Van was wholly devoted to the work of ministry to his loyal army of men, midwayers, and angels. The spiritual insight and moral steadfastness which enabled Van to maintain such an unshakable attitude of loyalty to the universe government was the product of clear thinking, wise reasoning, logical judgment, sincere motivation, unselfish purpose, intelligent loyalty, experiential memory, disciplined character, and the unquestioning dedication of his personality to the doing of the will of the Father in Paradise.

This seven years of waiting was a time of heart searching and soul discipline. Such crises in the affairs of a universe demonstrate the tremendous influence of mind as a factor in spiritual choosing. Education, training, and experience are factors in most of the vital decisions of all evolutionary moral creatures. But it is entirely possible for the indwelling spirit to make direct contact with the decision-determining powers of the human personality so as to empower the fully consecrated will of the creature to perform amazing acts of loyal devotion to the will and the way of the Father in Paradise. And this is just what occurred in the experience of Amadon, the modified human associate of Van.

Amadon is the outstanding human hero of the Lucifer rebellion. This male descendant of Andon and Fonta was one of the one hundred who contributed life plasm to the Prince's staff, and ever since that event he had been attached to Van as his associate and human assistant. Amadon elected to stand with his chief throughout the long and trying struggle. And it was an inspiring sight to behold this child of the evolutionary races standing unmoved by the sophistries of Daligastia while throughout the seven-year struggle he and his loyal associates resisted with unyielding fortitude all of the deceptive teachings of the brilliant Caligastia.

Caligastia, with a maximum of intelligence and a vast experience in universe affairs, went astray—embraced sin. Amadon, with a minimum of intelligence and utterly devoid of universe experience, remained steadfast in the service of the universe and in loyalty to his associate. Van utilized both mind and spirit in a magnificent and effective combination of intellectual determination and spiritual insight, thereby achieving an experiential level of personality realization of the highest attainable order. Mind and spirit, when fully united, are potential for the creation of superhuman values, even morontia realities.

There is no end to the recital of the stirring events of these tragic days. But at last the final decision of the last personality was made, and then, but only then, did a Most High of Edentia arrive with the emergency Melchizedeks to seize authority on Urantia. The Caligastia panoramic reign-records on Jerusem were obliterated, and the probationary era of planetary rehabilitation was inaugurated. ~ The Urantia Book, (67:3.1)