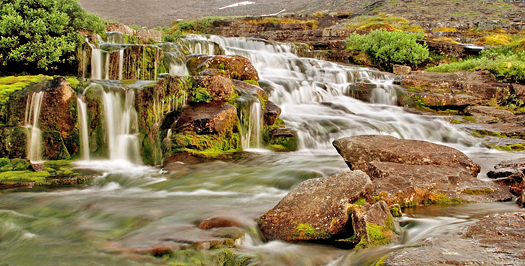 Spirituality becomes at once the indicator of one's nearness to God and the measure of one's usefulness to fellow beings. Spirituality enhances the ability to discover beauty in things, recognize truth in meanings, and discover goodness in values. Spiritual development is determined by capacity therefor and is directly proportional to the elimination of the selfish qualities of love.

Actual spiritual status is the measure of Deity attainment, Adjuster attunement. The achievement of finality of spirituality is equivalent to the attainment of the maximum of reality, the maximum of Godlikeness. Eternal life is the endless quest for infinite values. ~ The Urantia Book, (100:2.4)

Give every developing child a chance to grow his own religious experience; do not force a ready-made adult experience upon him. Remember, year-by-year progress through an established educational regime does not necessarily mean intellectual progress, much less spiritual growth. Enlargement of vocabulary does not signify development of character. Growth is not truly indicated by mere products but rather by progress. Real educational growth is indicated by enhancement of ideals, increased appreciation of values, new meanings of values, and augmented loyalty to supreme values. ~ The Urantia Book, (100:1.3)

Religious experience is markedly influenced by physical health, inherited temperament, and social environment. But these temporal conditions do not inhibit inner spiritual progress by a soul dedicated to the doing of the will of the Father in heaven. There are present in all normal mortals certain innate drives toward growth and self-realization which function if they are not specifically inhibited. The certain technique of fostering this constitutive endowment of the potential of spiritual growth is to maintain an attitude of wholehearted devotion to supreme values. ~ The Urantia Book, (100:1.6)

Religious habits of thinking and acting are contributory to the economy of spiritual growth. One can develop religious predispositions toward favorable reaction to spiritual stimuli, a sort of conditioned spiritual reflex. Habits which favor religious growth embrace cultivated sensitivity to divine values, recognition of religious living in others, reflective meditation on cosmic meanings, worshipful problem solving, sharing one's spiritual life with one's fellows, avoidance of selfishness, refusal to presume on divine mercy, living as in the presence of God. The factors of religious growth may be intentional, but the growth itself is unvaryingly unconscious. ~ The Urantia Book, (100:1.8)

But the great problem of religious living consists in the task of unifying the soul powers of the personality by the dominance of LOVE. Health, mental efficiency, and happiness arise from the unification of physical systems, mind systems, and spirit systems. Of health and sanity man understands much, but of happiness he has truly realized very little. The highest happiness is indissolubly linked with spiritual progress. Spiritual growth yields lasting joy, peace which passes all understanding. ~ The Urantia Book, (100:4.3)

But man is not saved or ennobled by pressure. Spirit growth springs from within the evolving soul. Pressure may deform the personality, but it never stimulates growth. Even educational pressure is only negatively helpful in that it may aid in the prevention of disastrous experiences. Spiritual growth is greatest where all external pressures are at a minimum. "Where the spirit of the Lord is, there is freedom. " Man develops best when the pressures of home, community, church, and state are least. But this must not be construed as meaning that there is no place in a progressive society for home, social institutions, church, and state. ~ The Urantia Book, (103:5.11)

Spirituality and the Adjutant Spirit of Worship

ALL OF MAN'S truly religious reactions are sponsored by the early ministry of the adjutant of worship and are censored by the adjutant of wisdom. Man's first supermind endowment is that of personality encircuitment in the Holy Spirit of the Universe Creative Spirit; and long before either the bestowals of the divine Sons or the universal bestowal of the Adjusters, this influence functions to enlarge man's viewpoint of ethics, religion, and spirituality. ~ The Urantia Book, (103:0.1)

Spirituality is Part of a Progressive Civilization

The progressive program of an expanding civilization embraces:

1. The subnormal minded—those who do not exercise normal will power; those who do not make average decisions. This class embraces those who cannot comprehend God; they lack capacity for the intelligent worship of Deity. The subnormal beings of Urantia have a corps of seraphim, one company, with one battalion of cherubim, assigned to minister to them and to witness that justice and mercy are extended to them in the life struggles of the sphere.

2. The average, normal type of human mind. From the standpoint of seraphic ministry, most men and women are grouped in seven classes in accordance with their status in making the circles of human progress and spiritual development.

3. The supernormal minded—those of great decision and undoubted potential of spiritual achievement; men and women who enjoy more or less contact with their indwelling Adjusters; members of the various reserve corps of destiny. No matter in what circle a human happens to be, if such an individual becomes enrolled in any of the several reserve corps of destiny, right then and there, personal seraphim are assigned, and from that time until the earthly career is finished, that mortal will enjoy the continuous ministry and unceasing watchcare of a guardian angel. Also, when any human being makes the supreme decision, when there is a real betrothal with the Adjuster, a personal guardian is immediately assigned to that soul.

In the ministry to so-called normal beings, seraphic assignments are made in accordance with the human attainment of the circles of intellectuality and spirituality. You start out in your mind of mortal investment in the seventh circle and journey inward in the task of self-understanding, self-conquest, and self-mastery; and circle by circle you advance until (if natural death does not terminate your career and transfer your struggles to the mansion worlds) you reach the first or inner circle of relative contact and communion with the indwelling Adjuster. ~ The Urantia Book, (113:1.2)

When a mortal mind breaks through the inertia of animal legacy and attains the third circle of human intellectuality and acquired spirituality, a personal angel (in reality two) will henceforth be wholly and exclusively devoted to this ascending mortal. And thus these human souls, in addition to the ever-present and increasingly efficient indwelling Thought Adjusters, receive the undivided assistance of these personal guardians of destiny in all their efforts to finish the third circle, traverse the second, and attain the first. ~ The Urantia Book, (113:1.8)

Spirituality and the Reserve Corps of Destiny

The reserve corps of destiny consists of living men and women who have been admitted to the special service of the superhuman administration of world affairs. This corps is made up of the men and women of each generation who are chosen by the spirit directors of the realm to assist in the conduct of the ministry of mercy and wisdom to the children of time on the evolutionary worlds. It is the general practice in the conduct of the affairs of the ascension plans to begin this liaison utilization of mortal will creatures immediately they are competent and trustworthy to assume such responsibilities. Accordingly, as soon as men and women appear on the stage of temporal action with sufficient mental capacity, adequate moral status, and requisite spirituality, they are quickly assigned to the appropriate celestial group of planetary personalities as human liaisons, mortal assistants.

When human beings are chosen as protectors of planetary destiny, when they become pivotal individuals in the plans which the world administrators are prosecuting, at that time the planetary chief of seraphim confirms their temporal attachment to the seraphic corps and appoints personal destiny guardians to serve with these mortal reservists. All reservists have self-conscious Adjusters, and most of them function in the higher cosmic circles of intellectual achievement and spiritual attainment. ~ The Urantia Book, (114:7.1)

Sleeping Survivors. All mortals of survival status, in the custody of personal guardians of destiny, pass through the portals of natural death and, on the third period, personalize on the mansion worlds. Those accredited beings who have, for any reason, been unable to attain that level of intelligence mastery and endowment of spirituality which would entitle them to personal guardians, cannot thus immediately and directly go to the mansion worlds. Such surviving souls must rest in unconscious sleep until the judgment day of a new epoch, a new dispensation, the coming of a Son of God to call the rolls of the age and adjudicate the realm, and this is the general practice throughout all Nebadon. It was said of Christ Michael that, when he ascended on high at the conclusion of his work on earth, "He led a great multitude of captives. " And these captives were the sleeping survivors from the days of Adam to the day of the Master's resurrection on Urantia. ~ The Urantia Book, (30:4.4)

On the universe headquarters worlds you will enter the schools of philosophy, divinity, and pure spirituality. ~ The Urantia Book, (48:5.6)

Just as a butterfly emerges from the caterpillar stage, so will the true personalities of human beings emerge on the mansion worlds, for the first time revealed apart from their onetime enshroudment in the material flesh. The morontia career in the local universe has to do with the continued elevation of the personality mechanism from the beginning morontia level of soul existence up to the final morontia level of progressive spirituality. ~ The Urantia Book, (112:6.1)

Spirituality and the Trinity Teacher Sons

Each recurring mission of the Trinity Teacher Sons successively exalts such a supernal world to ever-ascending heights of wisdom, spirituality, and cosmic illumination. But the noble natives of such a sphere are still finite and mortal. Nothing is perfect; nevertheless, there is evolving a quality of near perfection in the operation of an imperfect world and in the lives of its human inhabitants. ~ The Urantia Book, (52:7.9)

On the Spheres of Light and Life

War has become a matter of history, and there are no more armies or police forces. Government is gradually disappearing. Self-control is slowly rendering laws of human enactment obsolete. The extent of civil government and statutory regulation, in an intermediate state of advancing civilization, is in inverse proportion to the morality and spirituality of the citizenship ~ The Urantia Book, (55:5.4)

Jesus Appeals to All Spiritual People

Mortals in all stages of spirituality and on all worlds may find in the personal life of Jesus that which will strengthen and inspire them as they progress from the lowest spirit levels up to the highest divine values, from the beginning to the end of all personal religious experience. ~ The Urantia Book, (196:2.4)