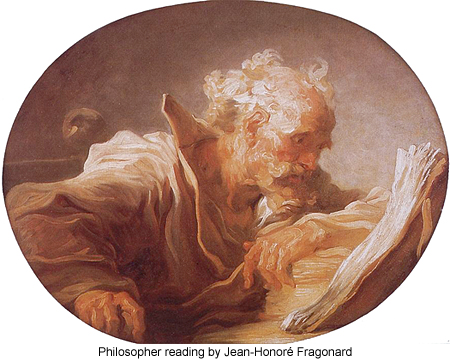 When man approaches the study and examination of his universe from the outside, he brings into being the various physical sciences; when he approaches the research of himself and the universe from the inside, he gives origin to theology and metaphysics. The later art of philosophy develops in an effort to harmonize the many discrepancies which are destined at first to appear between the findings and teachings of these two diametrically opposite avenues of approaching the universe of things and beings. ~ The Urantia Book, (103:6.2)

Your difficulty in arriving at a more harmonious co-ordination between science and religion is due to your utter ignorance of the intervening domain of the morontia world of things and beings. The local universe consists of three degrees, or stages, of reality manifestation: matter, morontia, and spirit. The morontia angle of approach erases all divergence between the findings of the physical sciences and the functioning of the spirit of religion. Reason is the understanding technique of the sciences; faith is the insight technique of religion; mota is the technique of the morontia level. Mota is a supermaterial reality sensitivity which is beginning to compensate incomplete growth, having for its substance knowledge-reason and for its essence faith-insight. Mota is a superphilosophical reconciliation of divergent reality perception which is nonattainable by material personalities; it is predicated, in part, on the experience of having survived the material life of the flesh. But many mortals have recognized the desirability of having some method of reconciling the interplay between the widely separated domains of science and religion; and metaphysics is the result of man's unavailing attempt to span this well-recognized chasm. But human metaphysics has proved more confusing than illuminating. Metaphysics stands for man's well-meant but futile effort to compensate for the absence of the mota of morontia. ~ The Urantia Book, (103:6.7)

Science is man's attempted study of his physical environment, the world of energy-matter; religion is man's experience with the cosmos of spirit values; philosophy has been developed by man's mind effort to organize and correlate the findings of these widely separated concepts into something like a reasonable and unified attitude toward the cosmos. Philosophy, clarified by revelation, functions acceptably in the absence of mota and in the presence of the breakdown and failure of man's reason substitute for mota—metaphysics. ~ The Urantia Book, (103:6.9)

The science of the material world enables man to control, and to some extent dominate, his physical environment. The religion of the spiritual experience is the source of the fraternity impulse which enables men to live together in the complexities of the civilization of a scientific age. Metaphysics, but more certainly revelation, affords a common meeting ground for the discoveries of both science and religion and makes possible the human attempt logically to correlate these separate but interdependent domains of thought into a well-balanced philosophy of scientific stability and religious certainty. ~ The Urantia Book, (103:7.9)

The Essence of Religion

It is only man's distance from infinity that causes this concept to be expressed as one word. While infinity is on the one hand UNITY, on the other it is DIVERSITY without end or limit. Infinity, as it is observed by finite intelligences, is the maximum paradox of creature philosophy and finite metaphysics. Though man's spiritual nature reaches up in the worship experience to the Father who is infinite, man's intellectual comprehension capacity is exhausted by the maximum conception of the Supreme Being. Beyond the Supreme, concepts are increasingly names; less and less are they true designations of reality; more and more do they become the creature's projection of finite understanding toward the superfinite. ~ The Urantia Book, (115:3.4)

Metaphysics in the Afterlife

Mansonia the third is a world of great personal and social achievement for all who have not made the equivalent of these circles of culture prior to release from the flesh on the mortal nativity worlds. On this sphere more positive educational work is begun. The training of the first two mansion worlds is mostly of a deficiency nature—negative—in that it has to do with supplementing the experience of the life in the flesh. On this third mansion world the survivors really begin their progressive morontia culture. The chief purpose of this training is to enhance the understanding of the correlation of morontia mota and mortal logic, the co-ordination of morontia mota and human philosophy. Surviving mortals now gain practical insight into true metaphysics. This is the real introduction to the intelligent comprehension of cosmic meanings and universe interrelationships. The culture of the third mansion world partakes of the nature of the postbestowal Son age of a normal inhabited planet. ~ The Urantia Book, (47:5.3)

Science ends its reason-search in the hypothesis of a First Cause. Religion does not stop in its flight of faith until it is sure of a God of salvation. The discriminating study of science logically suggests the reality and existence of an Absolute. Religion believes unreservedly in the existence and reality of a God who fosters personality survival. What metaphysics fails utterly in doing, and what even philosophy fails partially in doing, revelation does; that is, affirms that this First Cause of science and religion's God of salvation are one and the same Deity. ~ The Urantia Book, (101:2.7)

Metaphysics has proved a failure; mota, man cannot perceive. Revelation is the only technique which can compensate for the absence of the truth sensitivity of mota in a material world. Revelation authoritatively clarifies the muddle of reason-developed metaphysics on an evolutionary sphere. ~ The Urantia Book, (103:6.8)

Out of his incomplete grasp of science, his faint hold upon religion, and his abortive attempts at metaphysics, man has attempted to construct his formulations of philosophy. And modern man would indeed build a worthy and engaging philosophy of himself and his universe were it not for the breakdown of his all-important and indispensable metaphysical connection between the worlds of matter and spirit, the failure of metaphysics to bridge the morontia gulf between the physical and the spiritual. Mortal man lacks the concept of morontia mind and material; and revelation is the only technique for atoning for this deficiency in the conceptual data which man so urgently needs in order to construct a logical philosophy of the universe and to arrive at a satisfying understanding of his sure and settled place in that universe.

When the philosophy of man leans heavily toward the world of matter, it becomes rationalistic or naturalistic. When philosophy inclines particularly toward the spiritual level, it becomes idealistic or even mystical. When philosophy is so unfortunate as to lean upon metaphysics, it unfailingly becomes skeptical, confused. In past ages, most of man's knowledge and intellectual evaluations have fallen into one of these three distortions of perception. Philosophy dare not project its interpretations of reality in the linear fashion of logic; it must never fail to reckon with the elliptic symmetry of reality and with the essential curvature of all relation concepts.

The highest attainable philosophy of mortal man must be logically based on the reason of science, the faith of religion, and the truth insight afforded by revelation. By this union man can compensate somewhat for his failure to develop an adequate metaphysics and for his inability to comprehend the mota of the morontia. ~ The Urantia Book, (103:6.12)

The truth—an understanding of cosmic relationships, universe facts, and spiritual values—can best be had through the ministry of the Spirit of Truth and can best be criticized by revelation. But revelation originates neither a science nor a religion; its function is to co-ordinate both science and religion with the truth of reality. Always, in the absence of revelation or in the failure to accept or grasp it, has mortal man resorted to his futile gesture of metaphysics, that being the only human substitute for the revelation of truth or for the mota of morontia personality. ~ The Urantia Book, (103:7.8)