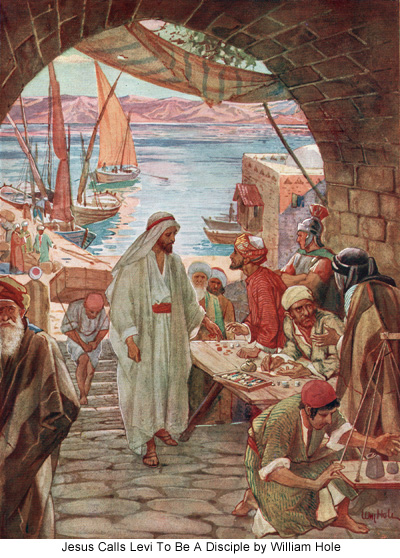 Jesus Was No Stranger to Business, Or Business Ethics

Jesus early demonstrated the possession of keen business judgment and financial sagacity. He was liberal but frugal; he was saving but generous. He proved to be a wise and efficient administrator of his father’s estate. ~ The Urantia Book, 126:2.7

Jesus was not afraid to identify himself with business men, laboring men, optimists, pessimists, philosophers, skeptics, publicans, politicians, and patriots. ~ The Urantia Book, 139:11.8

“As long as men choose to conduct the world’s business by trade and barter, they are entitled to a fair and legitimate profit. Every tradesman deserves wages for his services; the merchant is entitled to his hire. The fairness of trade and the honest treatment accorded one’s fellows in the organized business of the world create many different sorts of profit wealth, and all these sources of wealth must be judged by the highest principles of justice, honesty, and fairness. The honest trader should not hesitate to take the same profit which he would gladly accord his fellow trader in a similar transaction. While this sort of wealth is not identical with individually earned income when business dealings are conducted on a large scale, at the same time, such honestly accumulated wealth endows its possessor with a considerable equity as regards a voice in its subsequent distribution." ~ The Urantia Book, 132:5.17

“Some of you, before you entered the kingdom, were very shrewd in dealing with your business associates. If you were unjust and often unfair, you were nonetheless prudent and farseeing in that you transacted your business with an eye single to your present profit and future safety. Likewise should you now so order your lives in the kingdom as to provide for your present joy while you also make certain of your future enjoyment of treasures laid up in heaven. If you were so diligent in making gains for yourselves when in the service of self, why should you show less diligence in gaining souls for the kingdom since you are now servants of the brotherhood of man and stewards of God?" ~ The Urantia Book, 169:2.2

Industry on the Spheres of Light and Life

The economic, social, and administrative status of these worlds is of a high and perfected order. Science art, and industry flourish, and society is a smoothly working mechanism of high material, intellectual, and cultural achievement. Industry has been largely diverted to serving the higher aims of such a superb civilization. The economic life of such a world has become ethical. ~ The Urantia Book, 55:5.3

Industry in the Times of Dalamatia

The commission on industry and trade. This council was employed in fostering industry within the tribes and in promoting trade between the various peace groups. Its leader was Nod. Every form of primitive manufacture was encouraged by this corps. They contributed directly to the elevation of standards of living by providing many new commodities to attract the fancy of primitive men. They greatly expanded the trade in the improved salt produced by the council on science and art. ~ The Urantia Book, 66:5.11

The early specialists in industry were the flint flakers and stonemasons; next came the smiths. Subsequently group specialization developed; whole families and clans dedicated themselves to certain sorts of labor. The origin of one of the earliest castes of priests, apart from the tribal medicine men, was due to the superstitious exaltation of a family of expert swordmakers.

The first group specialists in industry were rock salt exporters and potters. Women made the plain pottery and men the fancy. Among some tribes sewing and weaving were done by women, in others by the men.

The early traders were women; they were employed as spies, carrying on commerce as a side line. Presently trade expanded, the women acting as intermediaries—jobbers. Then came the merchant class, charging a commission, profit, for their services. Growth of group barter developed into commerce; and following the exchange of commodities came the exchange of skilled labor. ~ The Urantia Book, 69:3.9

Through agriculture, animal domestication, and improved architecture, mankind gradually escaped the worst of the incessant struggle to live and began to cast about to find wherewith to sweeten the process of living; and this was the beginning of the striving for higher and ever higher standards of material comfort. Through manufacture and industry man is gradually augmenting the pleasure content of mortal life. ~ The Urantia Book, 81:5.2 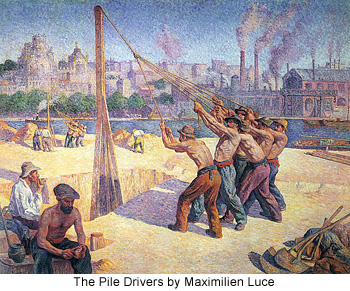 No sooner had man partially solved the problem of making a living than he was confronted with the task of regulating human contacts. The development of industry demanded law, order, and social adjustment; private property necessitated government. ~ The Urantia Book, 70:0.1

Early wars promoted organization and efficiency, but these have now become the aims of modern industry. During past ages war was a social ferment which pushed civilization forward; this result is now better attained by ambition and invention. ~ The Urantia Book, 70:2.9

The nations of Urantia have already entered upon the gigantic struggle between nationalistic militarism and industrialism, and in many ways this conflict is analogous to the agelong struggle between the herder-hunter and the farmer. But if industrialism is to triumph over militarism, it must avoid the dangers which beset it. The perils of budding industry on Urantia are:

To discover leaders society must now turn to the conquests of peace: industry, science, and social achievement. ~ The Urantia Book, 70:2.21

The ideal state undertakes to regulate social conduct only enough to take violence out of individual competition and to prevent unfairness in personal initiative. Here is a great problem in statehood: How can you guarantee peace and quiet in industry, pay the taxes to support state power, and at the same time prevent taxation from handicapping industry and keep the state from becoming parasitical or tyrannical? ~ The Urantia Book, 71:5.2

True, competition in industry is exceedingly wasteful and highly ineffective, but no attempt to eliminate this economic lost motion should be countenanced if such adjustments entail even the slightest abrogation of any of the basic liberties of the individual. ~ The Urantia Book, 71:5.4

Industry on a Neighboring Planet

These people have recently developed new techniques for the adjustment of industrial misunderstandings and for the correction of economic abuses which are marked improvements over their older methods of settling such problems. Violence has been outlawed as a procedure in adjusting either personal or industrial differences. Wages, profits, and other economic problems are not rigidly regulated, but they are in general controlled by the industrial legislatures, while all disputes arising out of industry are passed upon by the industrial courts. ~ The Urantia Book, 72:5.3

In all industry first attention is paid to health; certain phases of physical well-being are regarded as industrial and community prerogatives, but individual and family health problems are matters of personal concern only. In medicine, as in all other purely personal matters, it is increasingly the plan of government to refrain from interfering. ~ The Urantia Book, 72:7.2

Institutions of science. These technical schools are co-ordinated with industry rather than with the educational system and are administered under fifteen divisions. ~ The Urantia Book, 72:8.5 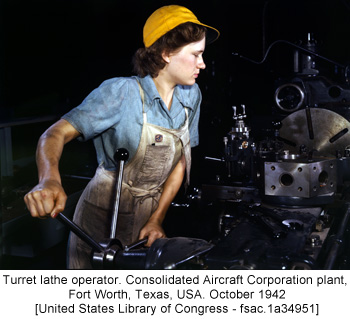 Decreasing primitive warfare greatly lessened the disparity between the division of labor based on sex. But women still had to do the real work while men did picket duty. No camp or village could be left unguarded day or night, but even this task was alleviated by the domestication of the dog. In general, the coming of agriculture has enhanced woman’s prestige and social standing; at least this was true up to the time man himself turned agriculturist. And as soon as man addressed himself to the tilling of the soil, there immediately ensued great improvement in methods of agriculture, extending on down through successive generations. In hunting and war man had learned the value of organization, and he introduced these techniques into industry and later, when taking over much of woman’s work, greatly improved on her loose methods of labor. ~ The Urantia Book, 84:3.10

Science not religion, really emancipated woman; it was the modern factory which largely set her free from the confines of the home. Man’s physical abilities became no longer a vital essential in the new maintenance mechanism; science so changed the conditions of living that man power was no longer so superior to woman power.

These changes have tended toward woman’s liberation from domestic slavery and have brought about such a modification of her status that she now enjoys a degree of personal liberty and sex determination that practically equals man's. Once a woman’s value consisted in her food-producing ability, but invention and wealth have enabled her to create a new world in which to function—spheres of grace and charm. Thus has industry won its unconscious and unintended fight for woman’s social and economic emancipation. And again has evolution succeeded in doing what even revelation failed to accomplish. ~ The Urantia Book, 84:5.7

Civilization never can obliterate the behavior gulf between the sexes. From age to age the mores change, but instinct never. Innate maternal affection will never permit emancipated woman to become man’s serious rival in industry. Forever each sex will remain supreme in its own domain, domains determined by biologic differentiation and by mental dissimilarity. ~ The Urantia Book, 84:5.13

Religionists must function in society, in industry, and in politics as individuals, not as groups, parties, or institutions. A religious group which presumes to function as such, apart from religious activities, immediately becomes a political party, an economic organization, or a social institution. Religious collectivism must confine its efforts to the furtherance of religious causes.

Religionists are of no more value in the tasks of social reconstruction than nonreligionists except in so far as their religion has conferred upon them enhanced cosmic foresight and endowed them with that superior social wisdom which is born of the sincere desire to love God supremely and to love every man as a brother in the heavenly kingdom. An ideal social order is that in which every man loves his neighbor as he loves himself. ~ The Urantia Book, 99:2.3

Political science must effect the reconstruction of economics and industry by the techniques it learns from the social sciences and by the insights and motives supplied by religious living. In all social reconstruction religion provides a stabilizing loyalty to a transcendent object, a steadying goal beyond and above the immediate and temporal objective. In the midst of the confusions of a rapidly changing environment mortal man needs the sustenance of a far-flung cosmic perspective. ~ The Urantia Book, 99:7.2

The complete secularization of science, education, industry, and society can lead only to disaster. During the first third of the twentieth century Urantians killed more human beings than were killed during the whole of the Christian dispensation up to that time. And this is only the beginning of the dire harvest of materialism and secularism; still more terrible destruction is yet to come. ~ The Urantia Book, 195:8.13

Christianity suffers under a great handicap because it has become identified in the minds of all the world as a part of the social system, the industrial life, and the moral standards of Western civilization; and thus has Christianity unwittingly seemed to sponsor a society which staggers under the guilt of tolerating science without idealism, politics without principles, wealth without work, pleasure without restraint, knowledge without character, power without conscience, and industry without morality. ~ The Urantia Book, 195:10.20

The angels of industry. This seraphic group is concerned with fostering industrial development and improving economic conditions among the Urantia peoples. This corps has been seven times changed since the bestowal of Michael. ~ The Urantia Book, 114:6.14