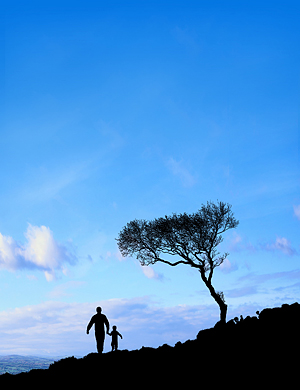 Even deeply spiritual people may not think that the realm of philosophy applies to the training and education of children. Granted, children do pick up a philosophy of living unconsciously from their parents. However, deliberately bringing philosophy into the light of a child's consciousness, by grasping any opportunity to help them creatively evolve their own personal philosophy of living, has tremendous value.

I would like to share an experience I had one evening recently with 3 children who are being brought up in a home of conscious spirituality and values, having been "primed" to be receptive to enlightened exploration.

It all began as a very mundane, material level of card playing. We four were playing a vigorous game of quadruple solitaire — just like solitary solitaire, but with four playing instead of one. I have found that many children love the energy and competitiveness of this game.

As we were playing it became obvious that some strategies worked and some didn't. We began to comment on these occasionally saying things like, "Stop whining" or "Don't just sit there, do something."

Halfway through the game we decided we would find parallels to the card game and the "game of life" when we were done playing. I also suggested that when we finished the game we could recall which game strategies worked and which didn't and write these discoveries down.

The children ranged from 7 to 14 years of age, and they all enjoyed this "philosophizing" as I called it. It's nothing more than developing a way of thinking about living, an art of living, that can make life better for people just like the solitaire game can be made better by game strategies.

From this exercise, the children and I came up with a list of "Parallels to Life." The oldest girl said she thought it would make a good essay for one of her English classes. I definitely agreed. When the children's parents got home we read the list to them and they clapped with delight. Here is what we came up with:

We could have gone on but we got enough out of this.

This kind of "philosophizing" can probably be done with most games and activities that adults do with children. It's important to let the discovery come from them. If they are the ones discovering these little gems, they will own them. Parents need only ask the pertinent questions and act as a stimulus, just get the ball rolling and everyone will enjoy the excitement of this thinking game. If only two little gems of wisdom are gleaned from a particular occasion, that is just fine.

Do let us know how it goes if you try "philosophizing" with your kids while playing games or doing life activities. It can be quite fun and helpful to "flesh out" these kinds of activities with philosophical meaning.

Always looking for the Spirit in the simple things of life with kids and families,