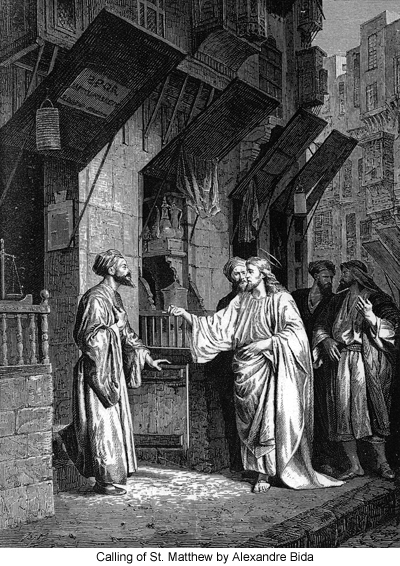 138:2.1 This first missionary tour of the six was eminently successful. They all discovered the great value of direct and personal contact with men. They returned to Jesus more fully realizing that, after all, religion is purely and wholly a matter of personal experience. They began to sense how hungry were the common people to hear words of religious comfort and spiritual good cheer. When they assembled about Jesus, they all wanted to talk at once, but Andrew assumed charge, and as he called upon them one by one, they made their formal reports to the Master and presented their nominations for the six new apostles.

138:2.2 Jesus, after each man had presented his selection for the new apostleships, asked all the others to vote upon the nomination; thus all six of the new apostles were formally accepted by all of the older six. Then Jesus announced that they would all visit these candidates and give them the call to service.

138:2.4 1. Matthew Levi, the customs collector of Capernaum, who had his office just to the east of the city, near the borders of Batanea. He was selected by Andrew.
138:2.5 2. Thomas Didymus, a fisherman of Tarichea and onetime carpenter and stone mason of Gadara. He was selected by Philip.
138:2.6 3. James Alpheus, a fisherman and farmer of Kheresa, was selected by James Zebedee.
138:2.7 4. Judas Alpheus, the twin brother of James Alpheus, also a fisherman, was selected by John Zebedee.
138:2.8 5. Simon Zelotes was a high officer in the patriotic organization of the Zealots, a position which he gave up to join Jesus' apostles. Before joining the Zealots, Simon had been a merchant. He was selected by Peter.
138:2.9 6. Judas Iscariot was an only son of wealthy Jewish parents living in Jericho. He had become attached to John the Baptist, and his Sadducee parents had disowned him. He was looking for employment in these regions when Jesus' apostles found him, and chiefly because of his experience with finances, Nathaniel invited him to join their ranks. Judas Iscariot was the only Judean among the twelve apostles.

138:2.10 Jesus spent a full day with the six, answering their questions and listening to the details of their reports, for they had many interesting and profitable experiences to relate. They now saw the wisdom of the Master's plan of sending them out to labor in a quiet and personal manner before the launching of their more pretentious public efforts.