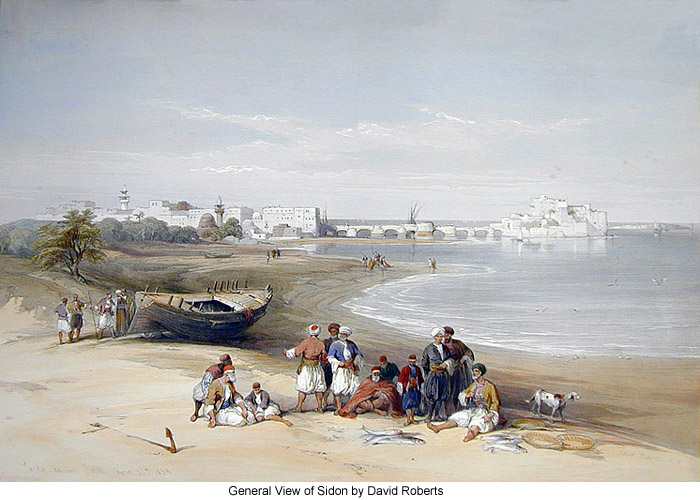 156:2.1 In entering Sidon, Jesus and his associates passed over a bridge, the first one many of them had ever seen. As they walked over this bridge, Jesus, among other things, said: "This world is only a bridge; you may pass over it, but you should not think to build a dwelling place upon it."

156:2.2 As the twenty-four began their labors in Sidon, Jesus went to stay in a home just north of the city, the house of Justa and her mother, Bernice. Jesus taught the twenty-four each morning at the home of Justa, and they went abroad in Sidon to teach and preach during the afternoons and evenings.

156:2.3 The apostles and the evangelists were greatly cheered by the manner in which the gentiles of Sidon received their message; during their short sojourn many were added to the kingdom. This period of about six weeks in Phoenicia was a very fruitful time in the work of winning souls, but the later Jewish writers of the Gospels were wont lightly to pass over the record of this warm reception of Jesus' teachings by these gentiles at this very time when such a large number of his own people were in hostile array against him.

156:2.4 In many ways these gentile believers appreciated Jesus' teachings more fully than the Jews. Many of these Greek -speaking Syrophoenicians came to know not only that Jesus was like God but also that God was like Jesus. These so-called heathen achieved a good understanding of the Master's teachings about the uniformity of the laws of this world and the entire universe. They grasped the teaching that God is no respecter of persons, races, or nations; that there is no favoritism with the Universal Father; that the universe is wholly and ever law-abiding and unfailingly dependable. These gentiles were not afraid of Jesus; they dared to accept his message. All down through the ages men have not been unable to comprehend Jesus; they have been afraid to.