The Fateful Sanhedrin Meeting - A Warrant Is Issued For Jesus' Arrest 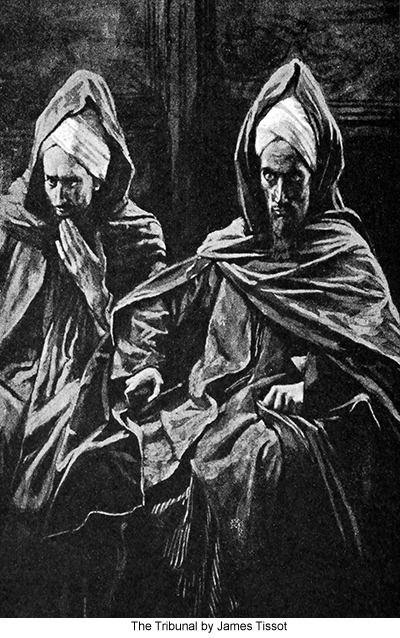 175:3.1 At eight o'clock on this Tuesday evening the fateful meeting of the Sanhedrin was called to order. On many previous occasions had this supreme court of the Jewish nation informally decreed the death of Jesus. Many times had this august ruling body determined to put a stop to his work, but never before had they resolved to place him under arrest and to bring about his death at any and all costs. It was just before midnight on this Tuesday, April 4, A.D. 30, that the Sanhedrin, as then constituted, officially and unanimously voted to impose the death sentence upon both Jesus and Lazarus. This was the answer to the Master's last appeal to the rulers of the Jews which he had made in the temple only a few hours before, and it represented their reaction of bitter resentment toward Jesus' last and vigorous indictment of these same chief priests and impenitent Sadducees and Pharisees. The passing of death sentence (even before his trial) upon the Son of God was the Sanhedrin's reply to the last offer of heavenly mercy ever to be extended to the Jewish nation, as such.

175:3.2 From this time on the Jews were left to finish their brief and short lease of national life wholly in accordance with their purely human status among the nations of Urantia. Israel had repudiated the Son of the God who made a covenant with Abraham, and the plan to make the children of Abraham the light-bearers of truth to the world had been shattered. The divine covenant had been abrogated, and the end of the Hebrew nation drew on apace.

175:3.3 The officers of the Sanhedrin were given the orders for Jesus' arrest early the next morning, but with instructions that he must not be apprehended in public. They were told to plan to take him in secret, preferably suddenly and at night. Understanding that he might not return that day (Wednesday) to teach in the temple, they instructed these officers of the Sanhedrin to "bring him before the high Jewish court sometime before midnight on Thursday."