The Acme Of Religious Living 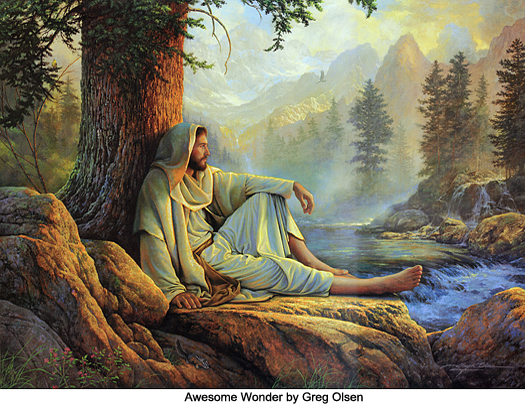 Although the average mortal of Urantia cannot hope to attain the high perfection of character which Jesus of Nazareth acquired while sojourning in the flesh, it is altogether possible for every mortal believer to develop a strong and unified personality along the perfected lines of the Jesus personality. The unique feature of the Master's personality was not so much its perfection as its symmetry, its exquisite and balanced unification. The most effective presentation of Jesus consists in following the example of the one who said, as he gestured toward the Master standing before his accusers, "Behold the man!"

The unfailing kindness of Jesus touched the hearts of men, but his stalwart strength of character amazed his followers. He was truly sincere; there was nothing of the hypocrite in him. He was free from affectation; he was always so refreshingly genuine. He never stooped to pretense, and he never resorted to shamming. He lived the truth, even as he taught it. He was the truth. He was constrained to proclaim saving truth to his generation, even though such sincerity sometimes caused pain. He was unquestioningly loyal to all truth.

But the Master was so reasonable, so approachable. He was so practical in all his ministry, while all his plans were characterized by such sanctified common sense. He was so free from all freakish, erratic, and eccentric tendencies. He was never capricious, whimsical, or hysterical. In all his teaching and in everything he did there was always an exquisite discrimination associated with an extraordinary sense of propriety.

The Son of Man was always a well-poised personality. Even his enemies maintained a wholesome respect for him; they even feared his presence. Jesus was unafraid. He was surcharged with divine enthusiasm, but he never became fanatical. He was emotionally active but never flighty. He was imaginative but always practical. He frankly faced the realities of life, but he was never dull or prosaic. He was courageous but never reckless; prudent but never cowardly. He was sympathetic but not sentimental; unique but not eccentric. He was pious but not sanctimonious. And he was so well-poised because he was so perfectly unified.

Jesus' originality was unstifled. He was not bound by tradition or handicapped by enslavement to narrow conventionality. He spoke with undoubted confidence and taught with absolute authority. But his superb originality did not cause him to overlook the gems of truth in the teachings of his predecessors and contemporaries. And the most original of his teachings was the emphasis of love and mercy in the place of fear and sacrifice.

Jesus was very broad in his outlook. He exhorted his followers to preach the gospel to all peoples. He was free from all narrow-mindedness. His sympathetic heart embraced all mankind, even a universe. Always his invitation was, "Whosoever will, let him come."

Of Jesus it was truly said, "He trusted God." As a man among men he most sublimely trusted the Father in heaven. He trusted his Father as a little child trusts his earthly parent. His faith was perfect but never presumptuous. No matter how cruel nature might appear to be or how indifferent to man's welfare on earth, Jesus never faltered in his faith. He was immune to disappointment and impervious to persecution. He was untouched by apparent failure.

He loved men as brothers, at the same time recognizing how they differed in innate endowments and acquired qualities. "He went about doing good."

Jesus was an unusually cheerful person, but he was not a blind and unreasoning optimist. His constant word of exhortation was, "Be of good cheer." He could maintain this confident attitude because of his unswerving trust in God and his unshakable confidence in man. He was always touchingly considerate of all men because he loved them and believed in them. Still he was always true to his convictions and magnificently firm in his devotion to the doing of his Father's will.

The Master was always generous. He never grew weary of saying, "It is more blessed to give than to receive." Said he, "Freely you have received, freely give." And yet, with all of his unbounded generosity, he was never wasteful or extravagant. He taught that you must believe to receive salvation. "For every one who seeks shall receive."

He was candid, but always kind. Said he, "If it were not so, I would have told you." He was frank, but always friendly. He was outspoken in his love for the sinner and in his hatred for sin. But throughout all this amazing frankness he was unerringly fair.

Jesus was consistently cheerful, notwithstanding he sometimes drank deeply of the cup of human sorrow. He fearlessly faced the realities of existence, yet was he filled with enthusiasm for the gospel of the kingdom. But he controlled his enthusiasm; it never controlled him. He was unreservedly dedicated to "the Father's business." This divine enthusiasm led his unspiritual brethren to think he was beside himself, but the onlooking universe appraised him as the model of sanity and the pattern of supreme mortal devotion to the high standards of spiritual living. And his controlled enthusiasm was contagious; his associates were constrained to share his divine optimism.

This man of Galilee was not a man of sorrows; he was a soul of gladness. Always was he saying, "Rejoice and be exceedingly glad." But when duty required, he was willing to walk courageously through the "valley of the shadow of death." He was gladsome but at the same time humble.

His courage was equaled only by his patience. When pressed to act prematurely, he would only reply, "My hour has not yet come." He was never in a hurry; his composure was sublime. But he was often indignant at evil, intolerant of sin. He was often mightily moved to resist that which was inimical to the welfare of his children on earth. But his indignation against sin never led to anger at the sinner.

His courage was magnificent, but he was never foolhardy. His watchword was, "Fear not." His bravery was lofty and his courage often heroic. But his courage was linked with discretion and controlled by reason. It was courage born of faith, not the recklessness of blind presumption. He was truly brave but never audacious.

The Master was a pattern of reverence. The prayer of even his youth began, "Our Father who is in heaven, hallowed be your name." He was even respectful of the faulty worship of his fellows. But this did not deter him from making attacks on religious traditions or assaulting errors of human belief. He was reverential of true holiness, and yet he could justly appeal to his fellows, saying, "Who among you convicts me of sin?"

Jesus was great because he was good, and yet he fraternized with the little children. He was gentle and unassuming in his personal life, and yet he was the perfected man of a universe. His associates called him Master unbidden.

Jesus was the perfectly unified human personality. And today, as in Galilee, he continues to unify mortal experience and to co-ordinate human endeavors. He unifies life, ennobles character, and simplifies experience. He enters the human mind to elevate, transform, and transfigure it. It is literally true: "If any man has Christ Jesus within him, he is a new creature; old things are passing away; behold, all things are becoming new." ~ The Urantia Book, (100:7.1)