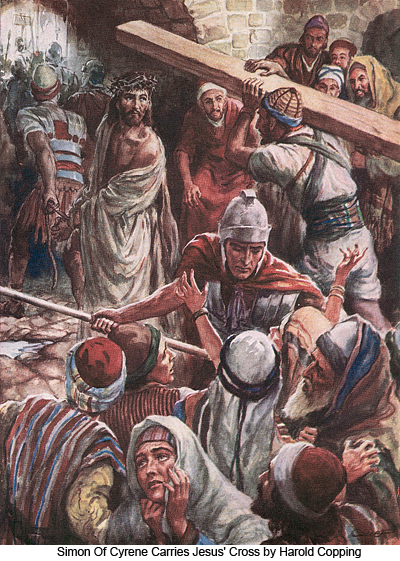 187:1.8 As the Master trudged along on the way to the crucifixion, he was very weary; he was nearly exhausted. He had had neither food nor water since the Last Supper at the home of Elijah Mark; neither had he been permitted to enjoy one moment of sleep. In addition, there had been one hearing right after another up to the hour of his condemnation, not to mention the abusive scourgings with their accompanying physical suffering and loss of blood. Superimposed upon all this was his extreme mental anguish, his acute spiritual tension, and a terrible feeling of human loneliness.

187:1.9 Shortly after passing through the gate on the way out of the city, as Jesus staggered on bearing the crossbeam, his physical strength momentarily gave way, and he fell beneath the weight of his heavy burden. The soldiers shouted at him and kicked him, but he could not arise. When the captain saw this, knowing what Jesus had already endured, he commanded the soldiers to desist. Then he ordered a passerby, one Simon from Cyrene, to take the crossbeam from Jesus' shoulders and compelled him to carry it the rest of the way to Golgotha.

187:1.10 This man Simon had come all the way from Cyrene, in northern Africa, to attend the Passover. He was stopping with other Cyrenians just outside the city walls and was on his way to the temple services in the city when the Roman captain commanded him to carry Jesus' crossbeam. Simon lingered all through the hours of the Master's death on the cross, talking with many of his friends and with his enemies. After the resurrection and before leaving Jerusalem, he became a valiant believer in the gospel of the kingdom, and when he returned home, he led his family into the heavenly kingdom. His two sons, Alexander and Rufus, became very effective teachers of the new gospel in Africa. But Simon never knew that Jesus, whose burden he bore, and the Jewish tutor who once befriended his injured son, were the same person.

187:1.11 It was shortly after nine o'clock when this procession of death arrived at Golgotha, and the Roman soldiers set themselves about the task of nailing the two brigands and the Son of Man to their respective crosses. 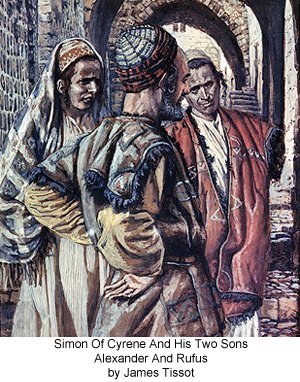