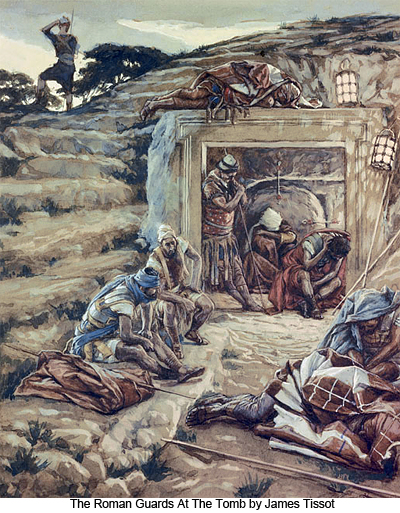 188:2.1 If Jesus' followers were unmindful of his promise to rise from the grave on the third day, his enemies were not. The chief priests, Pharisees, and Sadducees recalled that they had received reports of his saying he would rise from the dead.

188:2.2 This Friday night, after the Passover supper, about midnight a group of the Jewish leaders gathered at the home of Caiaphas, where they discussed their fears concerning the Master's assertions that he would rise from the dead on the third day. This meeting ended with the appointment of a committee of Sanhedrists who were to visit Pilate early the next day, bearing the official request of the Sanhedrin that a Roman guard be stationed before Jesus' tomb to prevent his friends from tampering with it. Said the spokesman of this committee to Pilate: "Sir, we remember that this deceiver, Jesus of Nazareth, said, while he was yet alive, `After three days I will rise again.' We have, therefore, come before you to request that you issue such orders as will make the sepulchre secure against his followers, at least until after the third day. We greatly fear lest his disciples come and steal him away by night and then proclaim to the people that he has risen from the dead. If we should permit this to happen, this mistake would be far worse than to have allowed him to live."

188:2.3 When Pilate heard this request of the Sanhedrists, he said: "I will give you a guard of ten soldiers. Go your way and make the tomb secure." They went back to the temple, secured ten of their own guards, and then marched out to Joseph's tomb with these ten Jewish guards and ten Roman soldiers, even on this Sabbath morning, to set them as watchmen before the tomb. These men rolled yet another stone before the tomb and set the seal of Pilate on and around these stones, lest they be disturbed without their knowledge. And these twenty men remained on watch up to the hour of the resurrection, the Jews carrying them their food and drink.