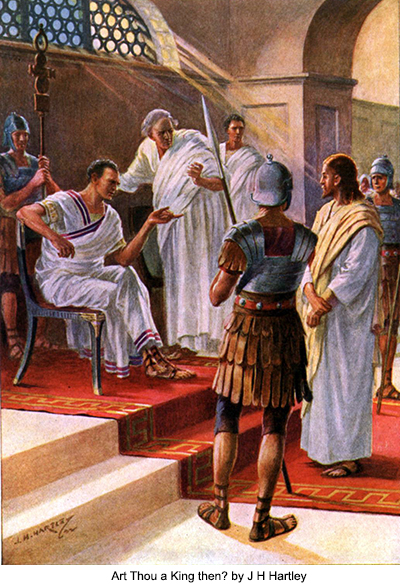 185:3.1 Pilate took Jesus and John Zebedee into a private chamber, leaving the guards outside in the hall, and requesting the prisoner to sit down, he sat down by his side and asked several questions. Pilate began his talk with Jesus by assuring him that he did not believe the first count against him: that he was a perverter of the nation and an inciter to rebellion. Then he asked, "Did you ever teach that tribute should be refused Caesar?" Jesus, pointing to John, said, "Ask him or any other man who has heard my teaching." Then Pilate questioned John about this matter of tribute, and John testified concerning his Master's teaching and explained that Jesus and his apostles paid taxes both to Caesar and to the temple. When Pilate had questioned John, he said, "See that you tell no man that I talked with you." And John never did reveal this matter.

185:3.2 Pilate then turned around to question Jesus further, saying: "And now about the third accusation against you, are you the king of the Jews?" Since there was a tone of possibly sincere inquiry in Pilate's voice, Jesus smiled on the procurator and said: "Pilate, do you ask this for yourself, or do you take this question from these others, my accusers?" Whereupon, in a tone of partial indignation, the governor answered: "Am I a Jew? Your own people and the chief priests delivered you up and asked me to sentence you to death. I question the validity of their charges and am only trying to find out for myself what you have done. Tell me, have you said that you are the king of the Jews, and have you sought to found a new kingdom?"

185:3.3 Then said Jesus to Pilate: "Do you not perceive that my kingdom is not of this world? If my kingdom were of this world, surely would my disciples fight that I should not be delivered into the hands of the Jews. My presence here before you in these bonds is sufficient to show all men that my kingdom is a spiritual dominion, even the brotherhood of men who, through faith and by love, have become the sons of God. And this salvation is for the gentile as well as for the Jew."

185:3.4 "Then you are a king after all?" said Pilate. And Jesus answered: "Yes, I am such a king, and my kingdom is the family of the faith sons of my Father who is in heaven. For this purpose was I born into this world, even that I should show my Father to all men and bear witness to the truth of God. And even now do I declare to you that every one who loves the truth hears my voice."

185:3.5 Then said Pilate, half in ridicule and half in sincerity, "Truth, what is truth—who knows?"

185:3.6 Pilate was not able to fathom Jesus' words, nor was he able to understand the nature of his spiritual kingdom, but he was now certain that the prisoner had done nothing worthy of death. One look at Jesus, face to face, was enough to convince even Pilate that this gentle and weary, but majestic and upright, man was no wild and dangerous revolutionary who aspired to establish himself on the temporal throne of Israel. Pilate thought he understood something of what Jesus meant when he called himself a king, for he was familiar with the teachings of the Stoics, who declared that "the wise man is king." Pilate was thoroughly convinced that, instead of being a dangerous seditionmonger, Jesus was nothing more or less than a harmless visionary, an innocent fanatic.

185:3.7 After questioning the Master, Pilate went back to the chief priests and the accusers of Jesus and said: "I have examined this man, and I find no fault in him. I do not think he is guilty of the charges you have made against him; I think he ought to be set free." And when the Jews heard this, they were moved with great anger, so much so that they wildly shouted that Jesus should die; and one of the Sanhedrists boldly stepped up by the side of Pilate, saying: "This man stirs up the people, beginning in Galilee and continuing throughout all Judea. He is a mischief-maker and an evildoer. You will long regret it if you let this wicked man go free."

185:3.8 Pilate was hard pressed to know what to do with Jesus; therefore, when he heard them say that he began his work in Galilee, he thought to avoid the responsibility of deciding the case, at least to gain time for thought, by sending Jesus to appear before Herod, who was then in the city attending the Passover. Pilate also thought that this gesture would help to antidote some of the bitter feeling which had existed for some time between himself and Herod, due to numerous misunderstandings over matters of jurisdiction.

185:3.9 Pilate, calling the guards, said: "This man is a Galilean. Take him forthwith to Herod, and when he has examined him, report his findings to me." And they took Jesus to Herod.