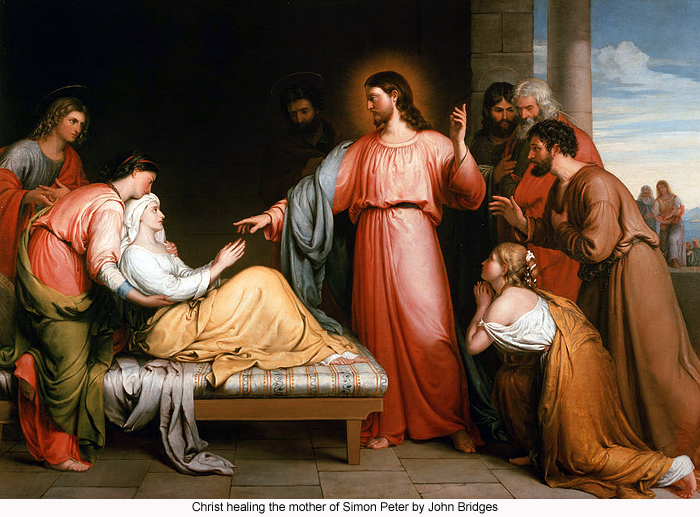 145:2.15 The cooking and the housework at the large Zebedee home, where Jesus and the twelve made their headquarters, was for the most part done by Simon Peter's wife and her mother. Peter's home was near that of Zebedee; and Jesus and his friends stopped there on the way from the synagogue because Peter's wife's mother had for several days been sick with chills and fever. Now it chanced that, at about the time Jesus stood over this sick woman, holding her hand, smoothing her brow, and speaking words of comfort and encouragement, the fever left her. Jesus had not yet had time to explain to his apostles that no miracle had been wrought at the synagogue; and with this incident so fresh and vivid in their minds, and recalling the water and the wine at Cana, they seized upon this coincidence as another miracle, and some of them rushed out to spread the news abroad throughout the city.

145:2.16 Amatha, Peter's mother-in-law, was suffering from malarial fever. She was not miraculously healed by Jesus at this time. Not until several hours later, after sundown, was her cure effected in connection with the extraordinary event which occurred in the front yard of the Zebedee home.

145:2.17 And these cases are typical of the manner in which a wonder-seeking generation and a miracle-minded people unfailingly seized upon all such coincidences as the pretext for proclaiming that another miracle had been wrought by Jesus.