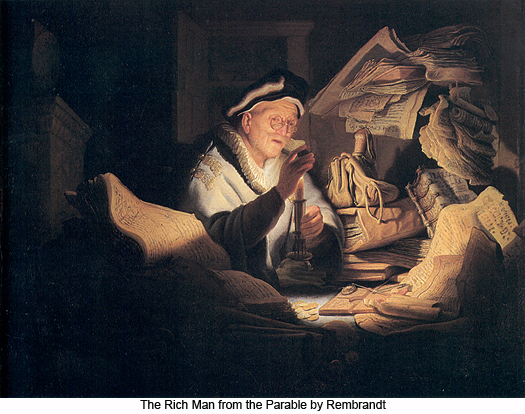 "You may all learn a lesson from the story of a certain rich man who had a shrewd but unjust steward. This steward had not only oppressed his master's clients for his own selfish gain, but he had also directly wasted and squandered his master's funds. When all this finally came to the ears of his master, he called the steward before him and asked the meaning of these rumors and required that he should give immediate accounting of his stewardship and prepare to turn his master's affairs over to another.

"Now this unfaithful steward began to say to himself: `What shall I do since I am about to lose this stewardship? I have not the strength to dig; to beg I am ashamed. I know what I will do to make certain that, when I am put out of this stewardship, I will be welcomed into the houses of all who do business with my master.' And then, calling in each of his lord's debtors, he said to the first, `How much do you owe my master?' He answered, `A hundred measures of oil.' Then said the steward, `Take your wax board bond, sit down quickly, and change it to fifty.' Then he said to another debtor, `How much do you owe?' And he replied, `A hundred measures of wheat.' Then said the steward, `Take your bond and write fourscore.' And this he did with numerous other debtors. And so did this dishonest steward seek to make friends for himself after he would be discharged from his stewardship. Even his lord and master, when he subsequently found out about this, was compelled to admit that his unfaithful steward had at least shown sagacity in the manner in which he had sought to provide for future days of want and adversity.

"And it is in this way that the sons of this world sometimes show more wisdom in their preparation for the future than do the children of light. I say to you who profess to be acquiring treasure in heaven: Take lessons from those who make friends with the mammon of unrighteousness, and likewise so conduct your lives that you make eternal friendship with the forces of righteousness in order that, when all things earthly fail, you shall be joyfully received into the eternal habitations.

"I affirm that he who is faithful in little will also be faithful in much, while he who is unrighteous in little will also be unrighteous in much. If you have not shown foresight and integrity in the affairs of this world, how can you hope to be faithful and prudent when you are trusted with the stewardship of the true riches of the heavenly kingdom? If you are not good stewards and faithful bankers, if you have not been faithful in that which is another's, who will be foolish enough to give you great treasure in your own name?

"And again I assert that no man can serve two masters; either he will hate the one and love the other, or else he will hold to one while he despises the other. You cannot serve God and mammon." (169:2.3)