One Day Alone With Jesus 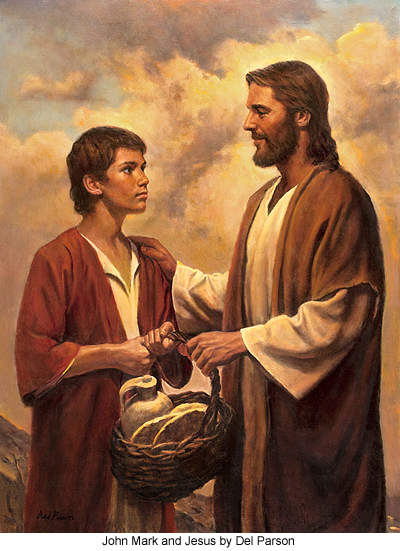 1. ONE DAY ALONE WITH GOD

As Jesus was about to take the lunch basket from John's hand, the young man ventured to say: "But, Master, you may set the basket down while you turn aside to pray and go on without it. Besides, if I should go along to carry the lunch, you would be more free to worship, and I will surely be silent. I will ask no questions and will stay by the basket when you go apart by yourself to pray."

While making this speech, the temerity of which astonished some of the near-by listeners, John had made bold to hold on to the basket. There they stood, both John and Jesus holding the basket. Presently the Master let go and, looking down on the lad, said:

"Since with all your heart you crave to go with me, it shall not be denied you. We will go off by ourselves and have a good visit. You may ask me any question that arises in your heart, and we will comfort and console each other. You may start out carrying the lunch, and when you grow weary, I will help you. Follow on with me."

Jesus did not return to the camp that evening until after sunset. The Master spent this last day of quiet on earth visiting with this truth-hungry youth and talking with his Paradise Father. This event has become known on high as "the day which a young man spent with God in the hills." Forever this occasion exemplifies the willingness of the Creator to fellowship the creature. Even a youth, if the desire of the heart is really supreme, can command the attention and enjoy the loving companionship of the God of a universe, actually experience the unforgettable ecstasy of being alone with God in the hills, and for a whole day. And such was the unique experience of John Mark on this Wednesday in the hills of Judea.

Jesus visited much with John, talking freely about the affairs of this world and the next. John told Jesus how much he regretted that he had not been old enough to be one of the apostles and expressed his great appreciation that he had been permitted to follow on with them since their first preaching at the Jordan ford near Jericho, except for the trip to Phoenicia. Jesus warned the lad not to become discouraged by impending events and assured him he would live to become a mighty messenger of the kingdom.

John Mark was thrilled by the memory of this day with Jesus in the hills, but he never forgot the Master's final admonition, spoken just as they were about to return to the Gethsemane camp, when he said:

"Well, John, we have had a good visit, a real day of rest, but see to it that you tell no man the things which I told you."

And John Mark never did reveal anything that transpired on this day which he spent with Jesus in the hills.

Throughout the few remaining hours of Jesus' earth life John Mark never permitted the Master for long to get out of his sight. Always was the lad in hiding near by; he slept only when Jesus slept.

In the course of this day's visiting with John Mark, Jesus spent considerable time comparing their early childhood and later boyhood experiences. Although John's parents possessed more of this world's goods than had Jesus' parents, there was much experience in their boyhood which was very similar. Jesus said many things which helped John better to understand his parents and other members of his family. When the lad asked the Master how he could know that he would turn out to be a "mighty messenger of the kingdom," Jesus said:

"I know you will prove loyal to the gospel of the kingdom because I can depend upon your present faith and love when these qualities are grounded upon such an early training as has been your portion at home. You are the product of a home where the parents bear each other a sincere affection, and therefore you have not been overloved so as injuriously to exalt your concept of self-importance. Neither has your personality suffered distortion in consequence of your parents' loveless maneuvering for your confidence and loyalty, the one against the other. You have enjoyed that parental love which insures laudable self-confidence and which fosters normal feelings of security. But you have also been fortunate in that your parents possessed wisdom as well as love; and it was wisdom which led them to withhold most forms of indulgence and many luxuries which wealth can buy while they sent you to the synagogue school along with your neighborhood playfellows, and they also encouraged you to learn how to live in this world by permitting you to have original experience. You came over to the Jordan, where we preached and John's disciples baptized, with your young friend Amos. Both of you desired to go with us. When you returned to Jerusalem, your parents consented; Amos's parents refused; they loved their son so much that they denied him the blessed experience which you have had, even such as you this day enjoy. By running away from home, Amos could have joined us, but in so doing he would have wounded love and sacrificed loyalty. Even if such a course had been wise, it would have been a terrible price to pay for experience, independence, and liberty. Wise parents, such as yours, see to it that their children do not have to wound love or stifle loyalty in order to develop independence and enjoy invigorating liberty when they have grown up to your age.

"Love, John, is the supreme reality of the universe when bestowed by all-wise beings, but it is a dangerous and oftentimes semiselfish trait as it is manifested in the experience of mortal parents. When you get married and have children of your own to rear, make sure that your love is admonished by wisdom and guided by intelligence.

"Your young friend Amos believes this gospel of the kingdom just as much as you, but I cannot fully depend upon him; I am not certain about what he will do in the years to come. His early home life was not such as would produce a wholly dependable person. Amos is too much like one of the apostles who failed to enjoy a normal, loving, and wise home training. Your whole afterlife will be more happy and dependable because you spent your first eight years in a normal and well-regulated home. You possess a strong and well-knit character because you grew up in a home where love prevailed and wisdom reigned. Such a childhood training produces a type of loyalty which assures me that you will go through with the course you have begun."

For more than an hour Jesus and John continued this discussion of home life. The Master went on to explain to John how a child is wholly dependent on his parents and the associated home life for all his early concepts of everything intellectual, social, moral, and even spiritual since the family represents to the young child all that he can first know of either human or divine relationships. The child must derive his first impressions of the universe from the mother's care; he is wholly dependent on the earthly father for his first ideas of the heavenly Father. The child's subsequent life is made happy or unhappy, easy or difficult, in accordance with his early mental and emotional life, conditioned by these social and spiritual relationships of the home. A human being's entire afterlife is enormously influenced by what happens during the first few years of existence.

It is our sincere belief that the gospel of Jesus' teaching, founded as it is on the father-child relationship, can hardly enjoy a world-wide acceptance until such a time as the home life of the modern civilized peoples embraces more of love and more of wisdom. Notwithstanding that parents of the twentieth century possess great knowledge and increased truth for improving the home and ennobling the home life, it remains a fact that very few modern homes are such good places in which to nurture boys and girls as Jesus' home in Galilee and John Mark's home in Judea, albeit the acceptance of Jesus' gospel will result in the immediate improvement of home life. The love life of a wise home and the loyal devotion of true religion exert a profound reciprocal influence upon each other. Such a home life enhances religion, and genuine religion always glorifies the home.

It is true that many of the objectionable stunting influences and other cramping features of these olden Jewish homes have been virtually eliminated from many of the better-regulated modern homes. There is, indeed, more spontaneous freedom and far more personal liberty, but this liberty is not restrained by love, motivated by loyalty, nor directed by the intelligent discipline of wisdom. As long as we teach the child to pray, "Our Father who is in heaven," a tremendous responsibility rests upon all earthly fathers so to live and order their homes that the word father becomes worthily enshrined in the minds and hearts of all growing children.