On The Way To Golgotha 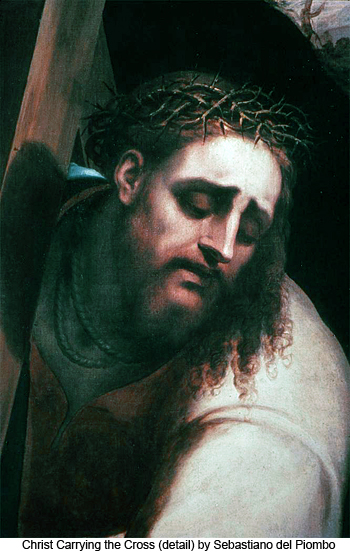 AFTER THE TWO brigands had been made ready, the soldiers, under the direction of a centurion, started for the scene of the crucifixion. The centurion in charge of these twelve soldiers was the same captain who had led forth the Roman soldiers the previous night to arrest Jesus in Gethsemane. It was the Roman custom to assign four soldiers for each person to be crucified. The two brigands were properly scourged before they were taken out to be crucified, but Jesus was given no further physical punishment; the captain undoubtedly thought he had already been sufficiently scourged, even before his condemnation.

187:0.2 The two thieves crucified with Jesus were associates of Barabbas and would later have been put to death with their leader if he had not been released as the Passover pardon of Pilate. Jesus was thus crucified in the place of Barabbas.

187:0.3 What Jesus is now about to do, submit to death on the cross, he does of his own free will. In foretelling this experience, he said: "The Father loves and sustains me because I am willing to lay down my life. But I will take it up again. No one takes my life away from me—I lay it down of myself. I have authority to lay it down, and I have authority to take it up. I have received such a commandment from my Father."

187:0.4 It was just before nine o'clock this morning when the soldiers led Jesus from the praetorium on the way to Golgotha. They were followed by many who secretly sympathized with Jesus, but most of this group of two hundred or more were either his enemies or curious idlers who merely desired to enjoy the shock of witnessing the crucifixions. Only a few of the Jewish leaders went out to see Jesus die on the cross. Knowing that he had been turned over to the Roman soldiers by Pilate, and that he was condemned to die, they busied themselves with their meeting in the temple, whereat they discussed what should be done with his followers.

187:1.1 Before leaving the courtyard of the praetorium, the soldiers placed the crossbeam on Jesus' shoulders. It was the custom to compel the condemned man to carry the crossbeam to the site of the crucifixion. Such a condemned man did not carry the whole cross, only this shorter timber. The longer and upright pieces of timber for the three crosses had already been transported to Golgotha and, by the time of the arrival of the soldiers and their prisoners, had been firmly implanted in the ground.

187:1.2 According to custom the captain led the procession, carrying small white boards on which had been written with charcoal the names of the criminals and the nature of the crimes for which they had been condemned. For the two thieves the centurion had notices which gave their names, underneath which was written the one word, "Brigand." It was the custom, after the victim had been nailed to the crossbeam and hoisted to his place on the upright timber, to nail this notice to the top of the cross, just above the head of the criminal, that all witnesses might know for what crime the condemned man was being crucified. The legend which the centurion carried to put on the cross of Jesus had been written by Pilate himself in Latin, Greek, and Aramaic, and it read: "Jesus of Nazareth—the King of the Jews."

187:1.3 Some of the Jewish authorities who were yet present when Pilate wrote this legend made vigorous protest against calling Jesus the "king of the Jews." But Pilate reminded them that such an accusation was part of the charge which led to his condemnation. When the Jews saw they could not prevail upon Pilate to change his mind, they pleaded that at least it be modified to read, "He said, `I am the king of the Jews.'" But Pilate was adamant; he would not alter the writing. To all further supplication he only replied, "What I have written, I have written."