Home Jesus The Women Who Followed Jesus Mary, Mother Of Jesus Difficulties In The Family

Difficulties In The Family 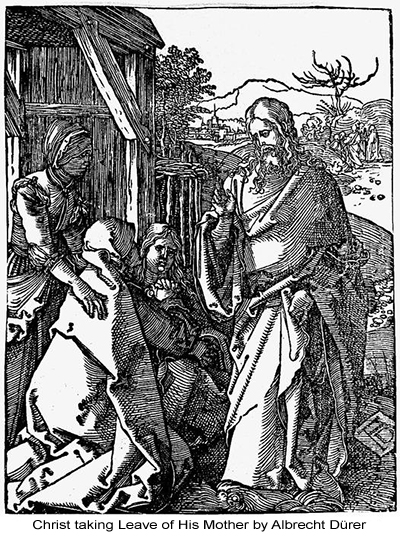 (134:1.6) About the time Jesus was preparing to leave Nazareth, the conductor of a large caravan which was passing through the city was taken violently ill, and Jesus, being a linguist, volunteered to take his place. Since this trip would necessitate his absence for a year, and inasmuch as all his brothers were married and his mother was living at home with Ruth, Jesus called a family conference at which he proposed that his mother and Ruth go to Capernaum to live in the home which he had so recently given to James. Accordingly, a few days after Jesus left with the caravan, Mary and Ruth moved to Capernaum, where they lived for the rest of Mary's life in the home that Jesus had provided. Joseph and his family moved into the old Nazareth home.

(137:7.1) For four long months— March, April, May, and June—this tarrying time continued; Jesus held over one hundred long and earnest, though cheerful and joyous, sessions with these six associates and his own brother James. Owing to sickness in his family, Jude seldom was able to attend these classes. James, Jesus' brother, did not lose faith in him, but during these months of delay and inaction Mary nearly despaired of her son. Her faith, raised to such heights at Cana, now sank to new low levels. She could only fall back on her so oft-repeated exclamation: "I cannot understand him. I cannot figure out what it all means." But James's wife did much to bolster Mary's courage.

(154:6.1) It was about eight o'clock on this Sunday morning when five members of Jesus' earth family arrived on the scene in response to the urgent summons of Jude's sister-in-law. Of all his family in the flesh, only one, Ruth, believed wholeheartedly and continuously in the divinity of his mission on earth. Jude and James, and even Joseph, still retained much of their faith in Jesus, but they had permitted pride to interfere with their better judgment and real spiritual inclinations. Mary was likewise torn between love and fear, between mother love and family pride. Though [Mary] … was harassed by doubts, she could never quite forget the visit of Gabriel ere Jesus was born. The Pharisees had been laboring to persuade Mary that Jesus was beside himself, demented. They urged her to go with her sons and seek to dissuade him from further efforts at public teaching. They assured Mary that soon Jesus' health would break, and that only dishonor and disgrace could come upon the entire family as a result of allowing him to go on. And so, when the word came from Jude's sister-in- law, all five of them started at once for Zebedee's house, having been together at Mary's home, where they had met with the Pharisees the evening before. They had talked with the Jerusalem leaders long into the night, and all were more or less convinced that Jesus was acting strangely, that he had acted strangely for some time. While Ruth could not explain all of his conduct, she insisted that he had always treated his family fairly and refused to agree to the program of trying to dissuade him from further work.

On the way to Zebedee's house they talked these things over and agreed among themselves to try to persuade Jesus to come home with them, for, said Mary: "I know I could influence my son if he would only come home and listen to me." James and Jude had heard rumors concerning the plans to arrest Jesus and take him to Jerusalem for trial. They also feared for their own safety. As long as Jesus was a popular figure in the public eye, his family allowed matters to drift along, but now that the people of Capernaum and the leaders at Jerusalem had suddenly turned against him, they began keenly to feel the pressure of the supposed disgrace of their embarrassing position.